The fire, which started on June 9, forced hundreds of villagers to relocate. 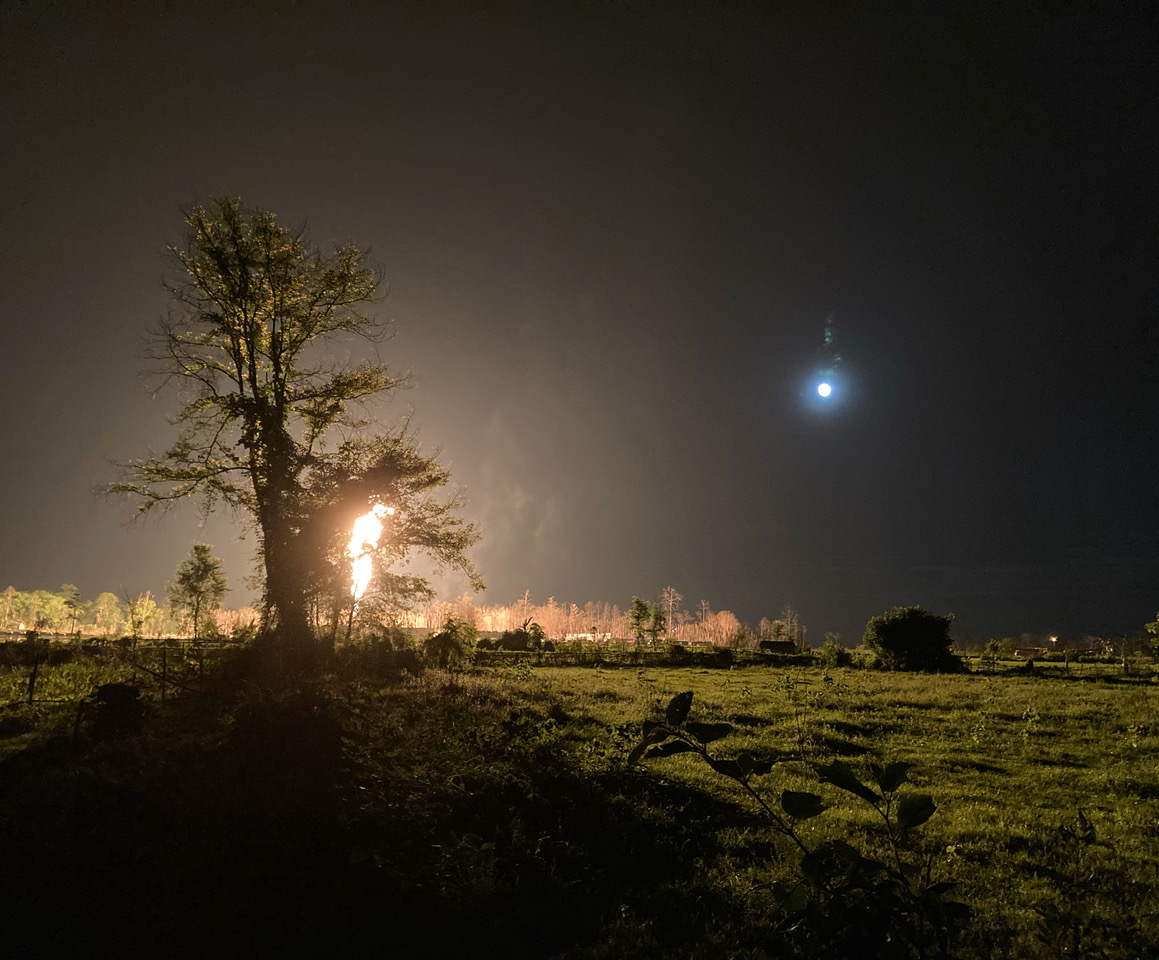 The fire at the natural gas well was preceded by a major blowout on May 27 during an unsuccessful attempt to service well number 5 Courtesy: Sadiq Naqvi

Guwahati (Assam) — More than five months after a fire at a natural gas well forced the relocation of hundreds of villagers in India and killed two employees of the state-owned company in the initial blast, the blaze was extinguished on Nov. 15.

Udit Moran, a resident of Baghjan Gaon — a small village in the northeastern state of Assam — recalled the horrific sight on the outskirts of his village on June 9 when the natural gas well caught fire.

“I sent my kids and other family members [away] the day the gas well caught fire,” said Moran, a farmer who grows paddy and has a small tea garden. “The kids are small. I did not want to leave anything to chance.”

Seeing other villagers flee, Moran moved his family to Rupai Siding, 20 km (12.4 miles) from his village.On Nov. 16, the family finally returned, only to find their home had been damaged.

“The incident has destroyed all the betelnut trees in my house. It will take years to grow them,” Moran said.

After the fire was extinguished, Tridiv Hazarika, spokesperson for the well’s owner, Oil India Ltd., said, “The well has been killed with brine solution and is under control now. The fire has been doused completely. There is no pressure in the well now. It is stable.”

The fire at the natural gas well was preceded by a major blowout on May 27 during an unsuccessful attempt to service well number 5.  Consequently, the high-pressure gas, which was flowing out uncontrollably, caught fire on June 9.

The fire spread over a few hundred meters, charring many houses and tea gardens. Hundreds of locals were forced to move to relief camps. 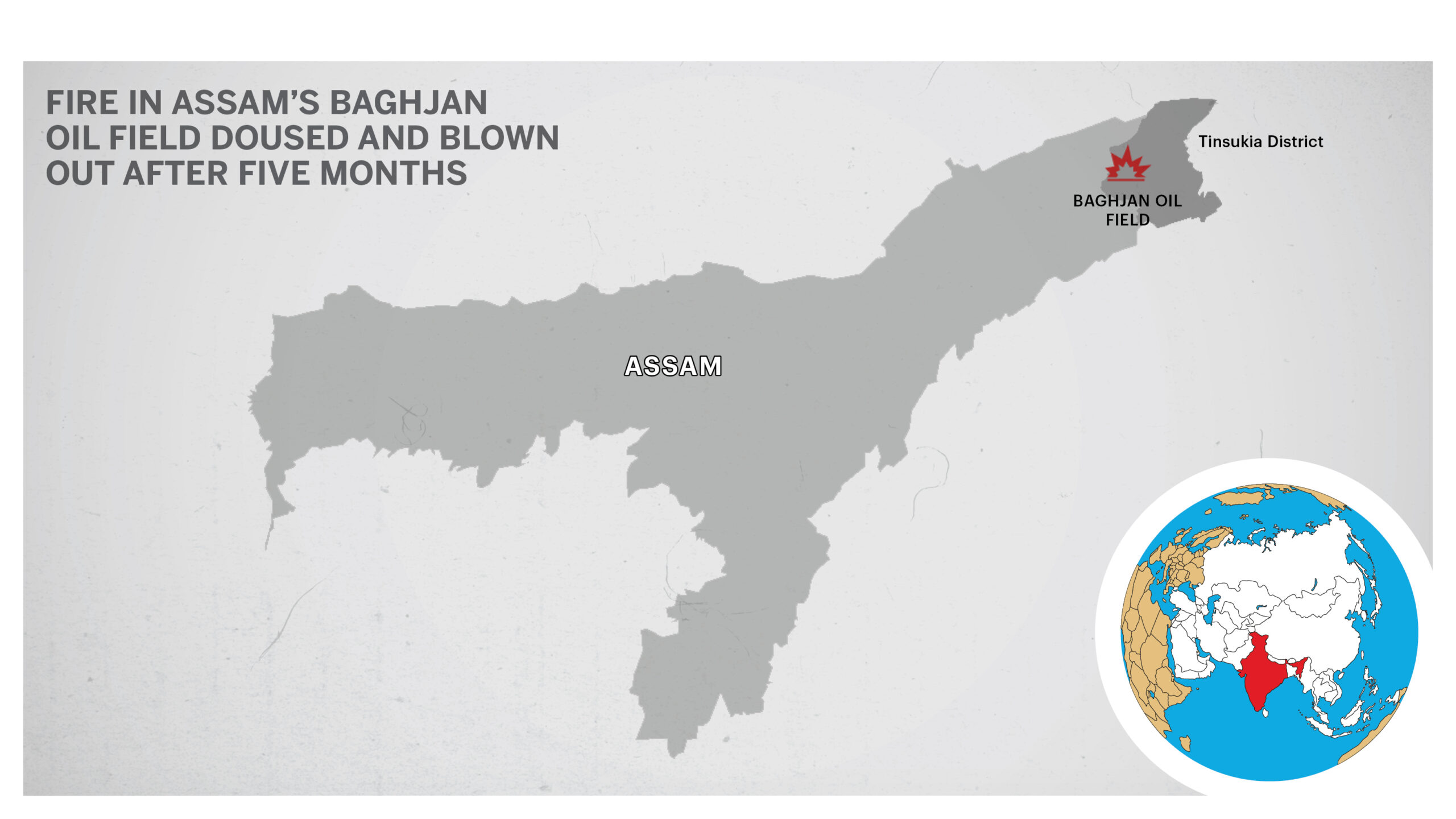 Oil India flew in experts from Alert Disaster Control, a Canadian well control company, among others from the United States and Singapore to help fight the fire. Yet even after the well was successfully capped and a blowout preventer was installed to control the pressure at which gas is extracted, the fire still was not under control.

“It was then decided to snub the well,” said Hazarika.

Snubbing is a complex operation that involves inserting mud into the bottom of the well. In this case, mud was finally inserted into the 3.7-km-(2.3-mile) deep well after attempts to kill the blaze at the surface failed.

“It was the first time Oil India has deployed snubbing technique to kill a well,” said Hazarika.

A 60-ton snubbing unit was transported in an An-124 Ruslan cargo plane from Calgary, Canada, to Kolkata as the airports in Assam could not accommodate the large aircraft.

To date, Oil India has paid INR 36.90 crore (about $5 million) in compensation to the villagers who were affected by the fire, Hazarika said. Some locals, however, claim they have not been compensated for their losses.

“My house is completely damaged, but I have not received any compensation for it,” said Akheswar Chetia, a 45-year-old farmer who lives in a rented house.

Chetia’s family received only interim relief from Oil India, he said, and the family is not sure when they will be able to return to their village.

“It is only after I get proper compensation that I will be able to rebuild my house,” Chetia said.

Hemanta Moran, a local teacher who has been heading the protests over compensation, said, “The company officials agreed to provide compensation as per our demands by Nov. 30.”

Upper Assam is lush tea country where the British first started cultivating tea in the early 19th century. They also dug India’s first oil well at Digboi in northeastern Assam in 1889.  Since then, oil exploration has expanded, and Oil India and ONGC — another government-owned oil company — have built multiple installations in the region.

“This is the biggest crisis we have faced in more than 60 years since our inception,” Hazarika said.

Though such accidents are rare, the disaster, in addition to leaving many villagers homeless, has damaged the region’s fragile ecology.

The village where the blaze occurred includes Dibru-Saikhowa National Park, a biosphere reserve on the south bank of the river Brahmaputra, and the Maguri-Motapung wetland, a bird habitat.  The area is home to 40 species of mammals, 500 species of birds, 104 species of fish, 11 species of turtles, 18 species of lizards, 23 species of snakes, 105 species of butterflies, and 680 plant species.

A study by the Wildlife Institute of India, an autonomous body under the environment ministry, stated that the blowout led to the release of an alarming level of carcinogenic polycyclic aromatic hydrocarbons [PAH]. It noted a coating of oil on bodies of water and plants and said the gas spread on land and in rivers and wetlands.

Several PAHs and some specific mixtures of PAHs are considered to be cancer-causing chemicals, according to a fact sheet by the U.S. Centers for Disease Control and Prevention.

“The gas spread not only on land, but also dispersed into the surrounding rivers and wetlands,” the study by the Wildlife Institute of India stated. “It was found that PAH concentrations in the present study were significantly higher than other studies in India [ranging from 6.0 – 143.2 microgram per liter] and other parts of the world [0.02 to 1.27 microgram per liter].”

A committee appointed by the National Green Tribunal (NGT) and headed by B.P. Katakey, a former judge, said the company flouted norms and failed to conduct a Biodiversity Impact Assessment Study as mandated by India’s Supreme Court. The committee also said the company did not have the required permissions to operate the gas well.

“There are three to four different environment impact studies done by different respected independent bodies. We have to look at the general consensus findings coming out of reports of all these different agencies. On the basis of that report and after the verdict of the NGT, we will go to the stakeholders on our take on the environment impact of the blowout,” said Hazarika, the spokesperson for Oil India Ltd.

The natural gas company plans to ramp up its production in the region, extracting hydrocarbons from under the Dibru Saikhowa National Park through extended-reach drilling — a technique the company would be deploying for the first time.  Extended-reach drilling involves directional drilling of very long horizontal wells.

The company earlier this year received approval to explore for hydrocarbons under the national park. Protests and blockades since May 27 led to a loss of 46,786 metric tonnes of crude oil and 124.15 million metric standard cubic meters of natural gas, according to the oil company.