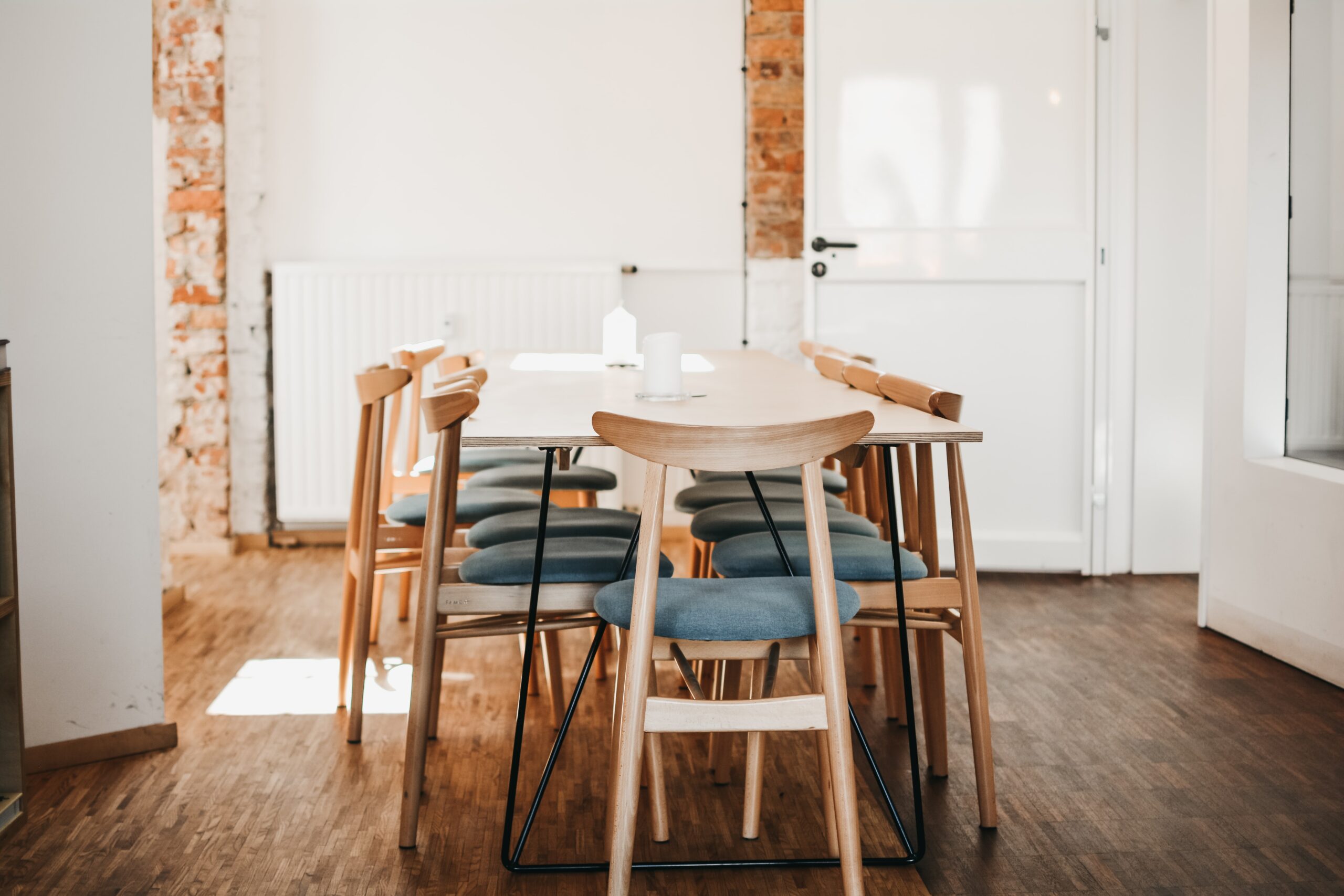 Reliance Retail plans to invest another INR 75 crore ($10 million) by 2023 to complete its acquisition of Bengaluru-based Urban Ladder, which also has some retail stores across India Courtesy: Katarzyna Grabowska (Unsplash)

Tamil Nadu — The retail arm of multinational conglomerate Reliance Industries has acquired a 96 percent stake in online furniture company Urban Ladder in a cash deal of INR 182 crore ($24.4 million) — a move aimed at boosting Reliance’s play in India’s vibrant e-commerce sector, where it is competing with Amazon.

The acquisition is Reliance Retail’s second this year in the online segment. On Aug. 14, it acquired online pharmacy Netmeds in another sector where Reliance is competing with Amazon, as well as with traditional pharmacies.  Amazon launched its first e-pharmacy in India on Aug. 14.

The corporate war between Amazon and Reliance spilled into courts last month, with the former trying to stop a planned acquisition by Reliance Retail. In August, Reliance Retail bought Future Group for INR 24,713 crore ($3.3 billion), rescuing it from debt of more than INR 19,000 crore ($2.6 billion). Amazon approached the nonprofit Singapore International Arbitration Centre over the legality of the sale.

India’s e-commerce market is expected to grow to $200 billion by 2026 from $38.5 billion in 2017, according to a report in September by the India Brand Equity Foundation. “Much of the growth for the industry has been triggered by an increase in internet and smartphone penetration,” the report states.

Reliance Retail plans to invest another INR 75 crore ($10 million) by 2023 to complete its acquisition of Bengaluru-based Urban Ladder, which also has some retail stores across India. The startup, which raised INR 770 crore ($103 million) since its inception in 2012, was backed by U.S.-based venture capitalist Sequoia Capital, private equity firm Saif Partners, and Kalaari Capital, among others. It raised another $2.1 million in November 2019, after its last equity round in February 2018. 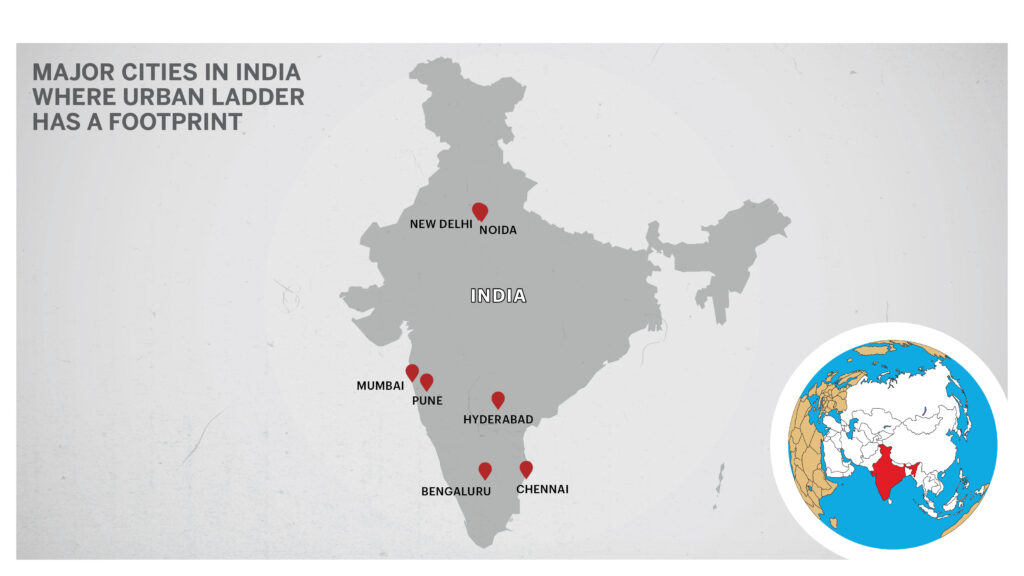 Urban Ladder’s co-founder, Rajiv Srivatsa, left in June this year to head venture capital firm Antler India. Srivatsa, who had been the primary fundraiser for Urban Ladder, helped build it into one of India’s most popular online furniture brands. Vani Kola, founder of Kalaari Capital, left Urban Ladder’s board at about the same time.

“Either the company had to be liquidated or sold at a lower price,” said Govind Shrikhande, former managing director of retail outlet Shoppers Stop. “It was clear that the existing investors were not interested in backing the company. Also, the entire retail industry has been facing difficulties in securing funding.

“It is uncertain why the company was sold at a much lower value than what it had raised,” said Shrikhande. “It is definitely a distress sale. But it was also a profit-making firm, with a turnover of INR 430 crore ($53 million). Why was it sold at this rate? This could mean there would be carry-forward losses.”

Urban Ladder made a profit, for the first time, of INR 49 crore ($6 million) in financial year 2018-19. India follows an April-March financial year. 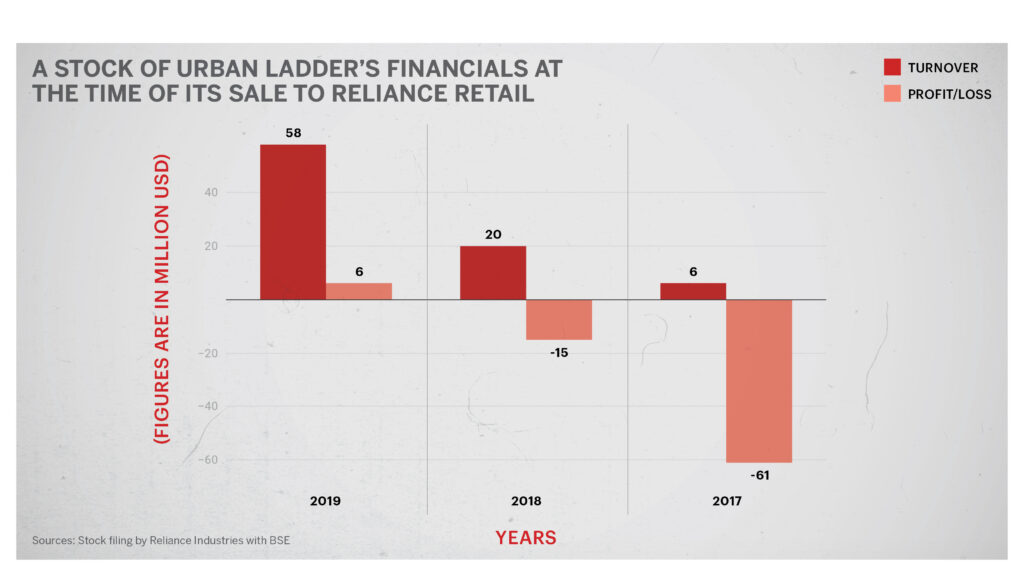 “One needs cash flow to grow a business and clearly the profit made by the company was not enough,” said Arvind Singhal, chairman and managing director of Technopak Advisors, a management consulting firm based in Haryana. “This might explain why it was sold at a discount. Also, with a buyer like Reliance, there might not have been much room for bargaining.”

Urban Ladder has been competing with other online furniture sellers such as Pepperfry, IKEA and Flipkart (acquired by Walmart), as well as with brick-and-mortar stores.

Experts also said the value at which Urban Ladder was sold to Reliance reflects how small the sector is.

“The sector has space for only three or four large players rather than many small players,” said Abneesh Roy, executive vice-president at Edelweiss Financial Services. “It is a tough space. That’s why, despite raising funds, Urban Ladder was sold at such a discounted price.”

Only 15 percent of the furniture market in India is in the organized sector. Pepperfry and Urban Ladder have been the two leading standalone players in the online segment.

The penetration of the online furniture market in India was only 0.1 percent in financial year 2018-19. It is not expected to grow until 2022, according to a report by KPMG.

“Online furniture is still an evolving segment, unlike online pharmacy,” said Singhal. “It will be a long haul for Reliance.”

Singhal said Reliance is trying to build a portfolio of online and offline products. “They can open shops for displaying their good, especially in tier-II and -III cities.”

This could also be the first of several such deals in the sector, said experts.

“The pandemic has shown people that it is important to be present in all forms —online and offline,” said Kumar Rajagopalan, CEO of the Retailers Association of India. “Those who already have a presence offline and are getting into the online segment are trying to consolidate their position. There will be more such transactions now that the economy is opening after the lockdown.”

Rajagopalan said such acquisitions would also help the sector grow.