Careless disposal of masks, gloves and PPE takes a toll on the marine ecosystem and those who live near the shore. 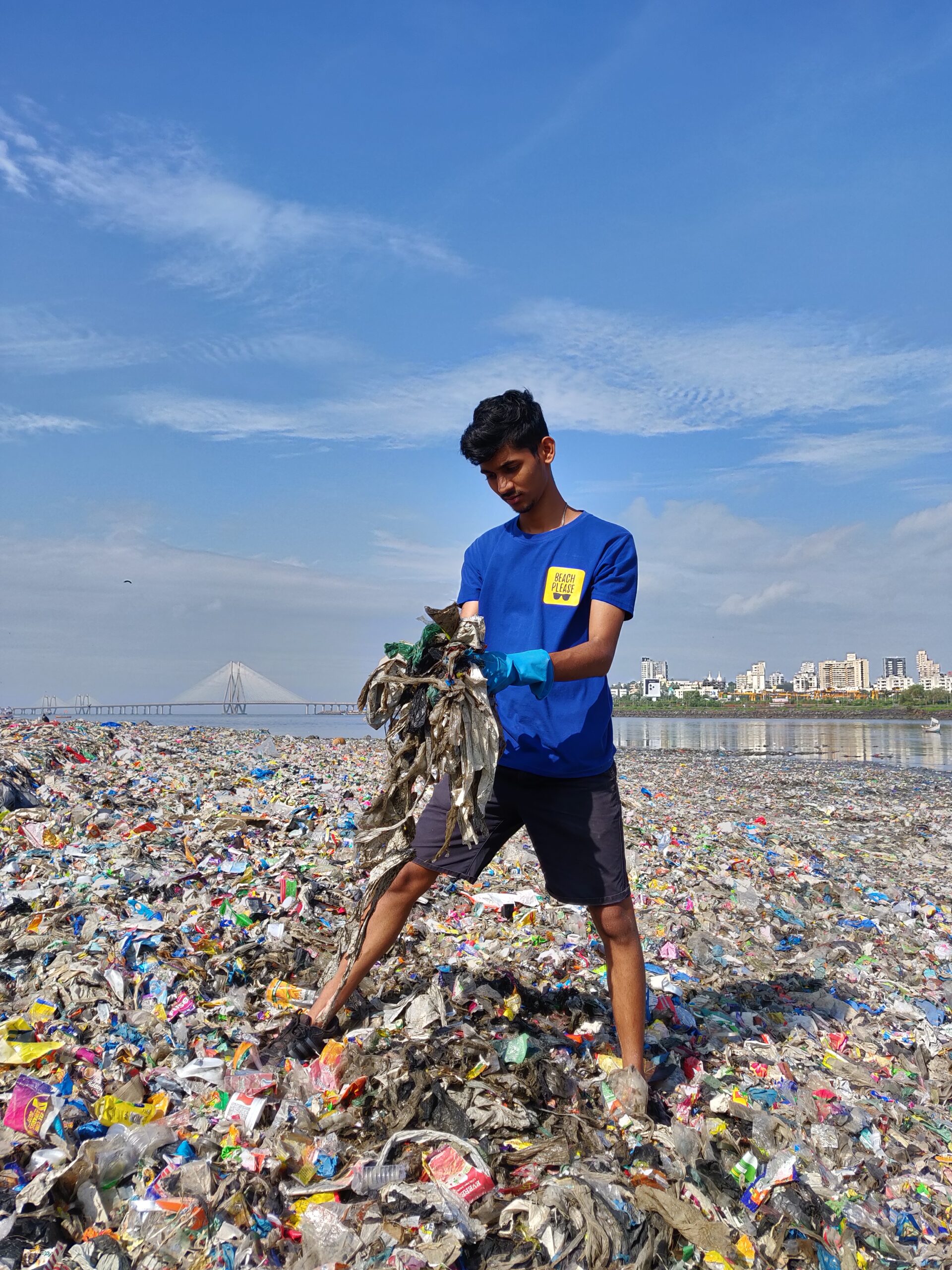 Malhar Kalambe of Beach Please, a Mumbai-based youth organization that cleans waste from water bodies, on the banks of the Mithi River in Mumbai, India Courtesy: Beach Please

Mumbai — Indian coastal cities are fighting against litter accumulating from discarded biomedical waste in the ocean and rivers and along beaches during the Covid-19 pandemic.

Masks, gloves, PPE, alcohol-based sanitizers and chlorine-based cleaners are among the pandemic-related items found in waterways and along shorelines. In addition to the careless behavior of those who discard these items, the government is also cited for its lack of policies and action regarding proper disposal of biomedical waste.

“While the authorities have been urging us to wear face masks, they aren’t sensitizing people for their proper use and disposal,” said Malhar Kalambe, 23, founder of Beach Please, a Mumbai-based youth organization that has been cleaning waste from water bodies for the past three years.

To date, Kalambe and his team have removed more than 4,500 tons of garbage from Mumbai’s coastline. He was awarded for his conservation efforts by the United Nations in 2018.

“The careless disposal of face masks is harming both terrestrial and aquatic animals,” Kalambe said. “The polypropylene present in them doesn’t decompose in the natural environment. Also, there have been instances when turtles have got stuck in the ear loops of the masks.”

“Disposable face masks (single use) that get to the environment (disposal in landfill, dumpsites, freshwater, oceans or littering at public spaces) could be emerging new source of microplastic fibers,” the researchers wrote.

Microplastic fibers, also found in fast food containers and plastic drinking bottles, break down into smaller pieces of particulate waste that do not decompose. Liquid hand cleansers and other sanitizing agents enter the water bodies easily and become another source of microplastic pollution.

In addition to the pollution related to the disposal of masks and sanitizers, drugs administered during the pandemic are also contributing to the degradation of the environment.

Microplastics (2–5 mm) in the marine environment can be ingested by aquatic life forms. Corals, which feed on crustaceans and plankton, ingest microplastics through them. Corals cannot digest microplastics and are thus adversely affected by them, a 2017 Environmental Science and Pollution Research study states.

“In the absence of a guaranteed drug for curing the virus, the doctors are commonly prescribing antibiotics. About half of these aren’t absorbed by the body and reach the neighboring water bodies through sewage channels in the form of residue. They severely impact the flora and fauna in water,” Rathore said.

“You can imagine the extent to which these antibiotics are harming the ecosystem as the water is also used for purposes such as domestic, farming, industrial and fish culture,” he added.

Ocean divers have recovered thousands of tons of waste since the pandemic began.

“We have conducted only four underwater cleanups since the beaches opened in September, but the number of surgical masks and gloves we discovered underwater is huge. We even collected a lot of medicine packets. We never found such items during our cleanups prior to the pandemic,” said Subhash Chandran, who heads Platypus Escapes, a scuba diving center in Vishakhapatnam in the southern state of Andhra Pradesh. 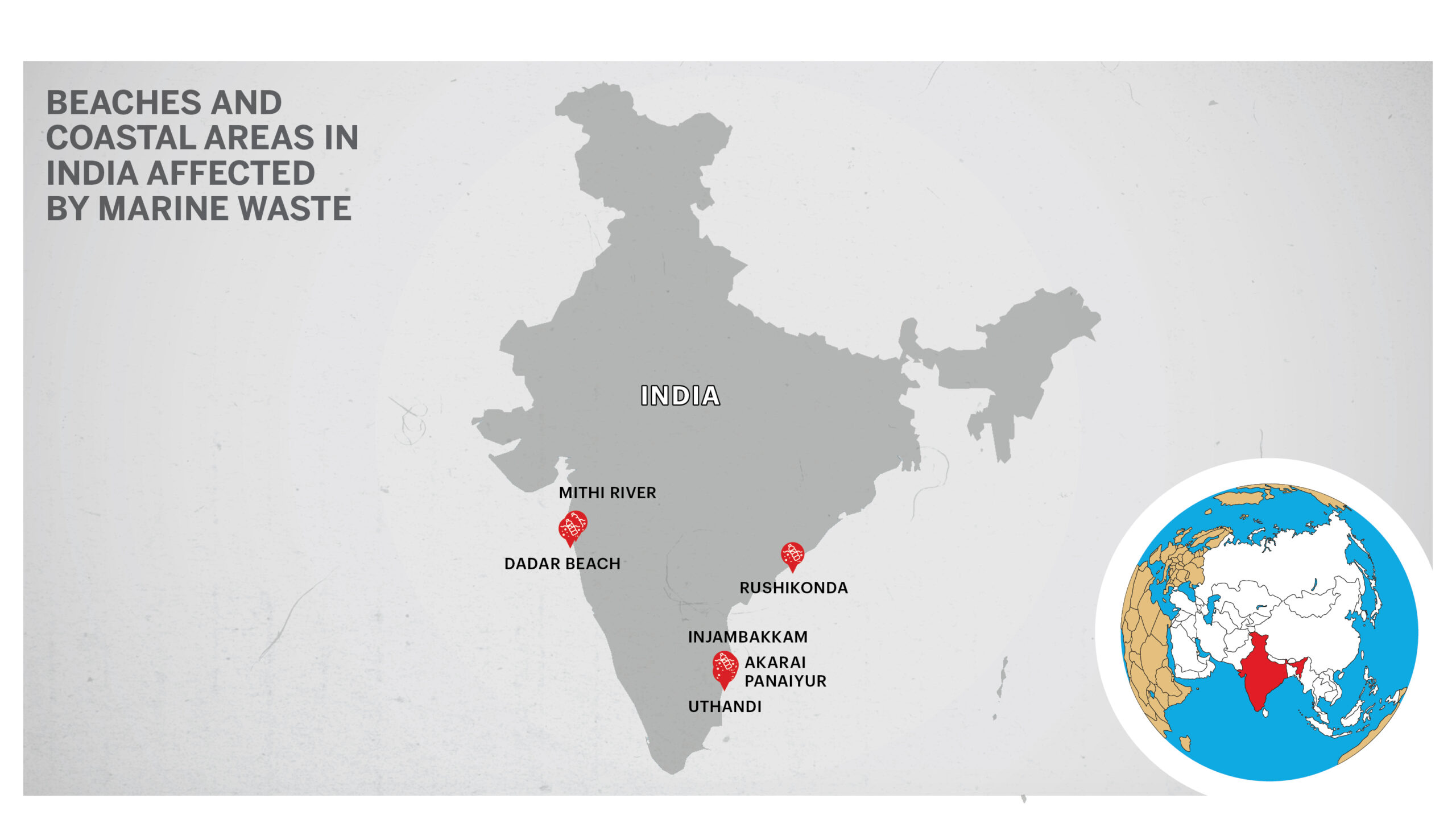 Chandran said the unchecked waste disposal into the sea from Vishakhapatnam is the primary reason for the presence of biomedical waste in linked bodies of water.

“Lawsons Bay is one of the popular beaches in Vishakhapatnam, but its proximity to settlements has made it one of the dirtiest beaches, with garbage mounding up both on the beach and under the water. The water current brings all the sewage from the cities towards Rushikonda, another neighborhood in Vishakhapatnam, which is where we conduct our cleanup drives.”

The pollution is so great in inland water bodies and beaches within cities that cleanup drives may not be conducted due to the fear of infection.

Chandran, who has been diving for a decade, started conducting underwater cleanups a year ago. So far, in 61 cleanups the team has removed around 20,000 kilograms (44,000 pounds) of plastic waste. His efforts were mentioned by Prime Minister Narendra Modi during his radio program last year.

With the relaxation of restrictions on outdoor activities, pollution in marine areas is increasing.

“Now that the lockdown has been lifted, people are coming out to the beaches in large numbers and leaving behind used masks and gloves on the seashores,” said Pavitra Sriprakash of Namma Beach, Namma Chennai, which organizes cleanup drives along the East Coast Road coast in Chennai, the capital of the southern state of Tamil Nadu.

Though the Greater Chennai Corporation, the city’s civic body, regularly conducts cleanups of tourist spots such as Marina beach and Elliot’s beach, most of the beaches on the outskirts of the city are left unattended.

The Greater Chennai Corporation and Municipal Corporation of Greater Mumbai did not respond to request for comments.

“There are still some movement restrictions to the tourist spots amid the city, and beaches within the city have not yet opened up completely for public access. This is driving most of the city’s crowd to beaches along the East Coast Road coast on the outskirts of the city. I can see surgical masks lying on the pathways, the roads and up to the shore. I have even found masks getting washed up on the beaches,” Sriprakash said. “They [people who litter] don’t even care that they could be transmitting the infection to the person who comes and cleans up the beach.”