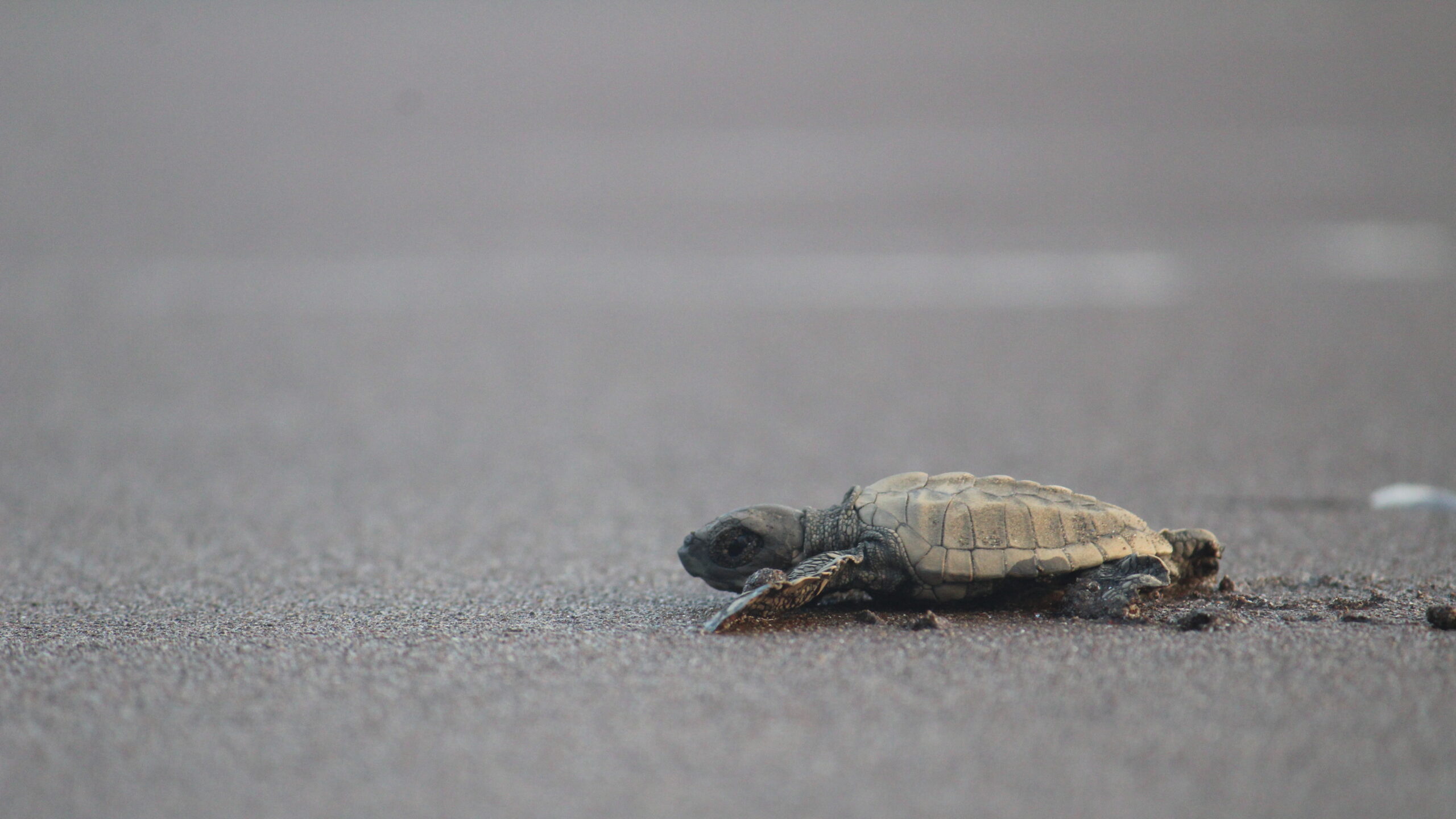 An olive ridley turtle hatchling makes its way to the sea on the west coast in Maharashtra. (Courtesy of Harshal Karve)

The Wildlife Institute of India (WII), an autonomous body under the environment ministry is all set to initiate a satellite tracking study of olive ridley turtles on the western coast of India. Aimed at the conservation of these marine turtles who arrive for nesting along the Indian coastline, the study will also focus on their migratory patterns and movements.

While the WII has undertaken two such studies in 2001 and 2007 along the east coast, this is for the first time that olive ridley turtles arriving at the western coast in Maharashtra state, will be tagged with the satellite transmitters.

“Every year, an incredible number of olive ridley turtles arrive at the Indian coastline for nesting,” said R Suresh Kumar, a WII scientist and an expert in migratory olive ridley turtles. “The mass nesting activity witnessed in the state of Odhisa on the east coast is unique to the world. Such mass nesting is only seen in a small stretch of beaches in Costa Rica and Mexico. Such social gathering of these sea turtles and their synchronous nesting and coordination is a mystery for us.”

“The second study gave us a lot of insights into the movement of these sea turtles,” said Kumar. “We found that some turtles stayed in the northern Bay of Bengal, suggesting that they were residents. Nearly 50 percent of turtles moved down south to the Sri Lankan coast.”

Kumar said that there has been a tremendous focus on the mass nesters along the east coast but little is known about the solitary nesting olive ridley turtles on the western coast. “Where do they come from? Are these independent groups or a part of the turtle population seen on the east coast? Our third study in Maharashtra will look at these aspects,” said Kumar.

The Maharashtra study will involve satellite tagging of three female olive ridley turtles. For satellite telemetry, the scientists attach a Platform Terminal Transmitter (PTT) onto the carapace of sea turtles. These transmitters emit signals when the turtles surface to breathe.

Experts say that satellite tracking exercise plays a key role in conservation. “The sea turtles, especially those who come near the shore, face different levels of threats from fishing activities,” said Kumar. “Many turtles are killed due to bottom trawling and gill netting. They get caught in the nets and cannot reach up to the surface to breathe. The 2007 study carried out in Odisha helped us in mapping critical hotspots of sea turtles, and authorities were able to secure these areas by anchoring patrolling boats to keep a watch, and stop destructive fishing practices. This helped in reducing the fishing-related turtle mortality”.

In Maharashtra too, the turtles arriving for solitary nesting may be exposed to similar threats. Experts hope that the satellite tracking study will help them chart out more conservation measures.

“We regularly see turtles who have ingested plastic as they mistake it for jellyfish,” said Mumbai based marine biologist Harshal Karve. “Strandings of turtles injured after being caught in fishing nets is common too. We have also seen a turtle who had a fishing hook stuck in the esophagus and another one caught in an oil spill, who had ingested a lot of oil”.

According to Karve, satellite tracking of sea turtles not only helps to understand their movement, but also chart out protection plans. “At present, we don’t know anything about the turtles arriving at the west coast. Once we know more about their migration pattern, foraging, and feeding grounds, we will be able to initiate mitigation measures,” he said.

The Indian coastline is a feeding and nesting ground for four species — olive ridley, leatherback, green and hawksbill turtles. All these species are protected under Schedule I of the Wildlife Protection Act, 1972. Sea turtles play an important role as a flagship species for diverse habitats such as coral reef ecosystems, seagrass meadows, open seas, and sandy beaches, says a 2015 report. “The threats that sea turtle populations face are representative of threats that impact other marine and coastal flora and fauna”.

“In Maharashtra, olive ridley turtles nest in beaches at Sindhudurg, Ratnagiri, and Raigad,” said Virendra Tiwari, additional principal chief conservator of forests (Mangrove Cell, Maharashtra). “We have appointed beach managers to protect the eggs and hatchlings from people, dogs, birds, etc. Patrolling is carried out to monitor illegal fishing activities, and we have also designed a compensation scheme for fishermen to release such species caught mistakenly in their nets.”

Over the past two years, fishermen have released 41 olive ridley turtles, 41 green sea turtles, three hawksbill turtles, and one leatherback sea turtle back into the sea in Maharashtra.