Durga Puja is a major Hindu festival, but its social significance overrides its religious import 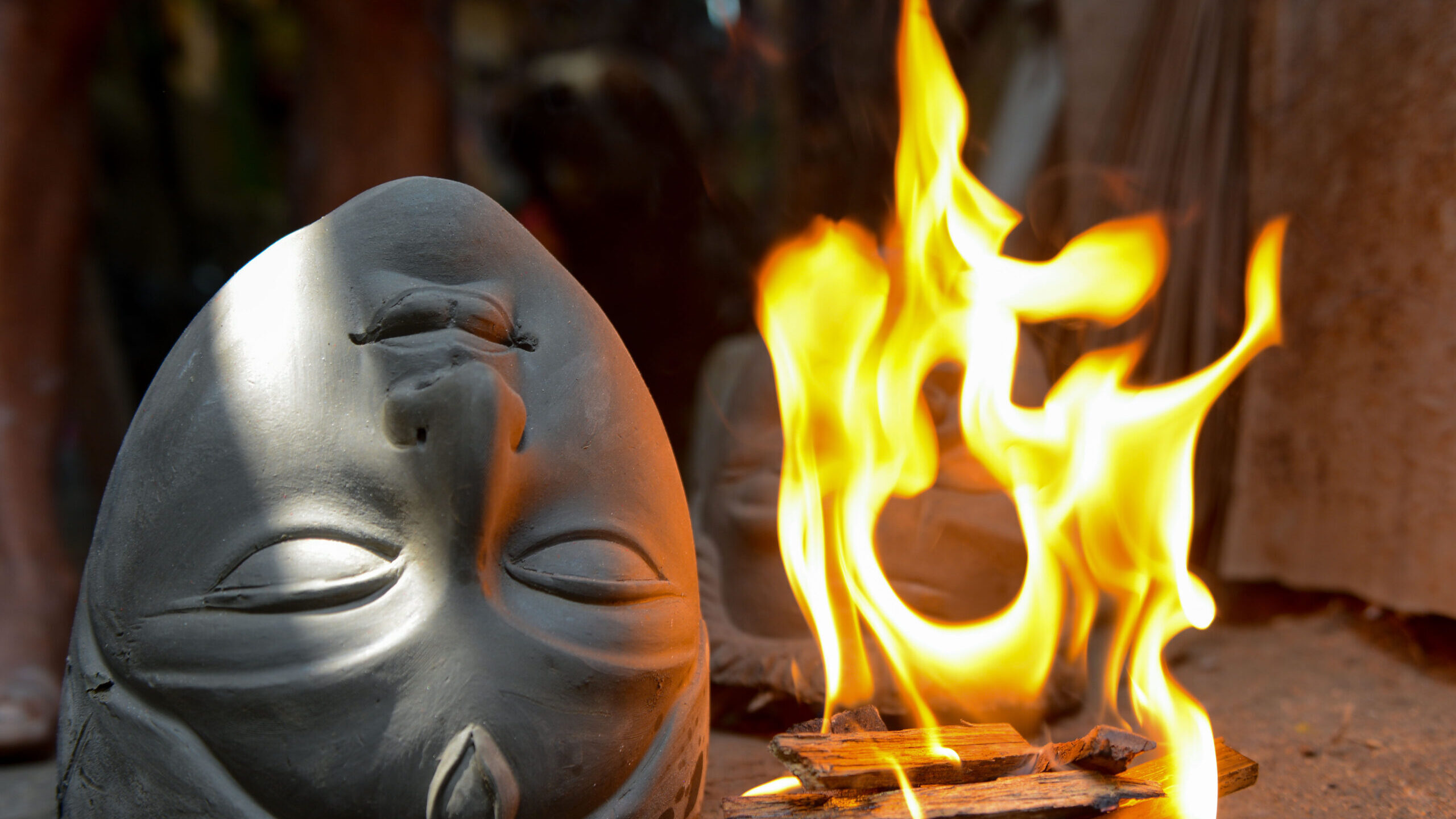 The face of a clay idol of goddess Durga being fired at Kumartuli — the potter's colony in Kolkata where these idols are made. Photo: Sudipta Banerjee

When it comes to Indian festivals, Diwali, with its pretty lights and firecrackers, hogs all the limelight! But, about a fortnight before the “festival of lights” is celebrated, eastern India throws itself into Durga Puja—a five-day whirlwind of festivity that celebrates the victory of a doe-eyed, 10-handed Hindu warrior goddess, over the formidable demon king, Mahisasura. This year, Durga Puja was held from October 22-26.

Straddled on a lion, and flanked by her “children”— Lakshmi, Saraswati, Kartikeya and Ganesha—the goddess Durga inspires fear and love in equal measure.

Every year, Durga Puja festivities start six days after Mahalaya — the first day of a 10-day period in autumn, when the goddess is said to descend to earth from her heavenly abode in Mount Kailash. While the goddess is mostly worshipped in her warrior avatar in Northern India, in Bengal, she is the favorite daughter who is pampered and showered with love when she visits her parental home with her brood.

Durga Puja in Bengal is different in more ways than one. Although it is a major Hindu festival, here its socio-cultural significance often tends to override the religious aspect.

The festival welcomes people of different faiths and communities to come together and participate in the revelry. And no one misses a chance to make full use of the four-day state holidays to wear new clothes; eat street specialties like kathi rolls (a kebab wrap), biryani (pilaf) and phuchkas (crisp flour balls filled with spicy, tangy tamarind water); walk miles from one exquisitely decorated pandal to another and catch up with friends.

Navpreet Arora, founder of Fun on Streets, 45, conducts street walks in Kolkata’s heritage district. A third generation Sikh with roots in Punjab, Arora has been celebrating Durga Puja with her friends and family for as long as she can remember.

“When I was younger, I preferred going to the smaller “barir pujo” (pujas held in people’s homes) of my friends because you could get to see all the rituals up close, eat the home-cooked khichudi (rice and lentil pilaf) and labra (a mixed vegetable preparation), do the dhunuchi naach (dance) and take part in all the festivities,” said Arora.

“Even my parents took part wholeheartedly. My typically Punjabi mom would make an effort to wear a sari and visit the neighborhood pandal on Ashtami (the auspicious eighth day of the pujas) to see ‘ma’ (mother goddess).”

Planning for the annual Durga Puja celebrations in Bengal often starts a year before the actual festivities. Puja committees are put in place, budgets are discussed, and themes brainstormed over many chai-sipping, sometimes heated, sessions.

But this year, as late as August-September, puja committees were left wondering if pandemic restrictions would allow Durga Puja celebrations at all, and even if they did, where the funds would come from in a cash-strapped economy.

Sanatan Rudra Pal, a fourth-generation master idol maker from Kumartuli, the potter’s colony in Kolkata, where the clay and bamboo idols of the mother goddess are traditionally made, was particularly worried.

“Our livelihood is solely dependent on making idols and most of us spent many anxiety-ridden days wondering if we would be able to earn anything at all,” said Pal. “While we did get a few orders, the bulk of them started coming in after Mamata Banerjee (the West Bengal Chief Minister) announced a grant of Rs 50,000 for each puja committee in the state.”

“But even after the grant, budgets were half of what they used to be. So the idols were smaller, and our income was halved as well,” said Pal who showcased his creative talents at the Masterda Smriti Sangha puja this year, where he created an idol in Bengal’s signature patachitra (cloth-based scroll paintings) style.

The Santosh Mitra Square Puja, in central Kolkata, has been making headlines in recent years for its grand excesses. Last year, for instance, its Sheesh Mahal (glass palace) themed pandal (a makeshift structure where the idol of the goddess is housed), and its Durga idol, plated with 52 kg of pure gold, drew crowds in thousands. The cost of organizing this extravagance was put at INR 20 crore (USD 27,03,391).

This year, with the pandemic reigning supreme, the goddess had to make do with a humbler cloth-jute-plywood replica of the Badrinath Temple in Uttarakhand, one of the holiest shrines in Hinduism. And there were no thronging crowds like other years; for the first time in its 85-year-old history, the pandal was closed to the public,

“At one point, we were not sure if the puja would happen at all, but I am glad to say that even under straitened circumstances, we managed to pull off a pretty impressive celebration,” said Sajal Ghosh, one of the key organizers of the Santosh Mitra Square puja. “And the best part is that everybody compromised. If my budget was 50 percent less, I got 60 percent discounts from my vendors as well.”

Ghosh, like his forefathers, long-time residents of this old-Kolkata neighborhood, has been deeply involved with this 85-year-old community puja, since he was a child.

“While my father and uncles were in charge of the more important stuff like actually organizing the puja, I was more than happy to be the general Man Friday—distributing flowers during the pushpanjali (offering of blooms to the mother goddess), serving bhog (food offered to the community), and generally hanging around the pandal with my friends,” said Ghosh, a businessman.

“The highlight was the jatra (folk theatre with over-the-top exaggerated performances) that would happen in the evenings,” said Ghosh. “Even if we went out to see other pandals during the day, we’d make sure that we were back in time to catch the cultural performances.”

Over the years, Ghosh and his fellow organizers have witnessed many Durga Pujas, but 2020 is a year that they will remember forever.

“This year’s puja was special in many ways—from the surrounding uncertainty to how we managed to pull it off,” said Ghosh. “But it’s not something we want to relive again!”