When Erekat succumbed to Covid-19, Palestinians had already been sidelined as the Trump administration sought a separate peace. 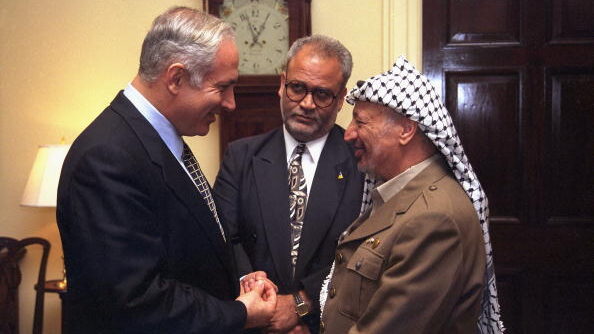 WASHINGTON, DC - OCTOBER 2, 1996: (ISRAEL OUT) In this Israeli Government Press Office (GPO) file photo, Prime Minister Benjamin Netanyahu (L) confers with Palestinian President Yasser Arafat (R) as Palestinian chief negotiator Saeb Erekat listens during a summit at the White House October 2, 1996 in Washington DC. Netanyahu, who is the leader of the conservative Likud party, has a growing lead in the race to become Israel's next Prime Minister. The politician and former special forces soldier has already served as Israel's Prime Minister, from 1996 to 1999. (Photo by Avi Ohayon/GPO via Getty Images)

JERUSALEM — Palestinian politician Saeb Erekat, among the world’s longest-serving statesmen, was laid to rest this week, ending a chapter of hard-nosed negotiation between the Palestinian Authority and the State of Israel at a time when the Jewish state is being welcomed into parts of the Arab world.

Erekat died in Hadassah University Hospital after being infected by Covid-19.

Born in the village of Abu Dis in 1955, in Palestinian-controlled territory abutting Jerusalem, Erekat was the son of prominent Palestinian parents. He was buried with full military honors in Jericho after a state ceremony at the Palestinian Authority Compound in Ramallah.

Erekat was the Palestinian Authority’s chief negotiator and a member of its leading Fatah party, where he operated with rare consensus support from competing internal factions for more than three decades, beginning with the 1991 Madrid Peace Conference.

“Mr. Erekat’s death is a double loss for the [Palestinian] Authority, which could not have come at a more inopportune time,” said Danny Citrinowicz, a career Israeli diplomat and senior fellow at The Abba Eban Research Institute at IDC Herzliya.

“In addition to losing a senior statesman, what the Palestinian Authority has actually lost is three decades of negotiating experience and irreplaceable knowledge that Mr. Erekat had collected serving consistently opposite the Israelis.”

Citzrinowicz said his knowledge had often provided the Palestinian side with an overlooked upper-hand when confronting various Israeli administrations throughout the years.

Israel, while it continues to anger Palestinians by building West Bank settlements, has found some Arab nations open to its trade for the first time this year. In the United Arab Emirates, Abu Dhabi is bustling with Israeli businessmen testing new waters. And Bahrain inked a formal agreement in October that normalized diplomatic relations with Israel.

Some observers who have watched Israel make its own peace in the Middle East regret that Erekat didn’t accomplish what he claimed to crave.

Arik Agassi, chief operating officer at the Jerusalem-based IMPACT-se organization, which promotes peace education by analyzing content in Israeli, Palestinian, and regional school textbooks, argued Erekat and the broader Palestinian Authority failed consistently to implement any real building blocks for peace in their many years in the leadership seat.

“The Palestinian side, always represented by Erekat, were shrewd in their ability to persuade international opinion to their advantage during negotiation periods and apply pressure on the Israelis … but at home, and particularly when educating the next generation of Palestinians, we haven’t seen policies implemented that advance a culture of peace,” said Agassi.

Erekat’s passing marks a page-turn but not a solid pivot: The Palestinian statehood question had been gradually sidelined from the Middle East’s political stage since the dawn of the Arab Spring uprisings ten years ago. And that trend accelerated exponentially during the Donald Trump administration in the United States as the hip-shooting president planted an American embassy in Jerusalem and circumvented Palestinians to make deals with less volatile nations.

Among the potential candidates to replace Erekat in the Palestinian power structure, West Bank Security Chief Majed Faraj has been named a leading contender.

Erekat’s casket was draped on Wednesday with a Palestinian flag and a checkered keffiyeh—the scarf popularized by leader Yasser Arafat during his years at the helm of the Palestine Liberation Organization.