“There was a moment in boxing where he owned the sport!” 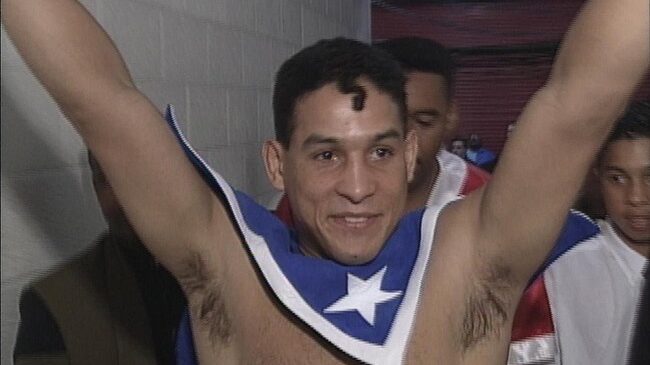 Emmy Award-winning director/producer Eric Drath is known for capturing stories about the entertaining sport of boxing. His 2010 film “Assault In The Ring” captured an Emmy for Outstanding Sports Documentary.

Drath has since produced other acclaimed films, including “No Mas,” which revolved around the controversial ending of the 1980 rematch between boxing greats Sugar Ray Leonard and Roberto Durán.

Showtime will air Drath’s newest project, “Macho: The Hector Camacho Story,” exclusively on Dec. 4. It speaks on one of boxing’s all-time greatest fighters and showmen.

Camacho ended his career in 2010 with a record of 79 wins, six losses, and three draws. No one ever stopped him during his 30-year career.

Camacho was inducted into the International Boxing Hall of Fame in 2016. He shone brightly inside the ring, but he had dark moments outside it, ending with his tragic shooting death in November 2012.

Drath captures the ups and downs of the Puerto Rican boxing superstar in this highly anticipated documentary.

Zenger: You have done a remarkable job with all of your documentaries, but your boxing ones have been really special. What made Hector “Macho” Camacho a subject for you, and someone who you wanted to dig deeper into his story?

Drath: Thank you! Well, Hector was one of those bigger-than-life characters from when I was a fan watching sports as a kid. I also had a great affinity towards him because he was a New Yorker, from East Harlem. He was just one of those guys that—there was a moment in boxing where he owned the sport! After Leonard and before Tyson, it was Hector Camacho. It was “Macho Time!” I just felt like nobody had done this story. And when he was killed and there were so many questions about his murder and the fact that it was unsolved, I just knew I had to.

Zenger: With “Assault In The Ring” you captured the good, bad, and the ugly of boxing. A “No Mas” hit on the controversial side of the sport. This one captures one of the greatest showmen in boxing history, and all his tragedy. What do you feel like viewers will take away from your documentary?

Drath: Just on what you said, he took what [Muhammad ] Ali started and quadrupled it. If there was a showman, I agree with you, it was Camacho. What do I think fans or viewers will take away from this? I’m not exactly sure, but I hope that they go on a ride, the Hector Camacho ride—from the humble beginnings in the Barrio to the top of the boxing world. And that they see that this man, as bright as he was, also had a dark side. Unfortunately, that dark side caught up with the light. It put the light out. What started as one of the brightest lights in boxing was darkened by his inner demons, which he could never fully run from.

Zenger: Boxing to a degree is a very dark sport, and secretive at times. You have been able to capture some great content in your previous two boxing documentaries, and I’m sure you did the same with “Macho.” The people that you reach out to, are they willing to talk and be open about these fighters and situations?

Drath: Oh certainly! You’d be amazed at how truthful people become when the cameras start rolling. The people that loved him, while they want to protect his legacy and his reputation, they also are true. What you find with Hector Camacho is, even though it was widely known that he had this dark side and this party life, it didn’t stop you from loving him. He never was not a sympathetic character. In his darkest moments, he was still a sympathetic character. And I think that’s why people kind of accepted—that’s who he was. So people were ready to talk about it because people want to celebrate it. It’s part cautionary tale and it’s part tragedy. And it’s also an inspirational story of someone who against all odds made it.

Zenger: In your research and your findings, did you learn anything new about Camacho?

Drath: Oh yeah! A lot of fun facts along the way. His biggest influence, believe it or not, is Bruce Lee. He loved Bruce Lee. That was something I learned. I learned a lot about his style and his early days of fighting and where he fought. One of the many things I actually set out to learn is about the circumstances of his murder. That was something that I felt was this open wound for the family, and we’re still living with it today. And it was that charge that kind of made me say, “I gotta find out more information here.”

Zenger: To have a Puerto Rican icon murdered in Puerto Rico, where he is or should be revered—and yet they seem no closer to solving the murder of Hector Camacho. Unbelievable to me.

Drath: Well, I did dig into that. And the sad truth is, if Puerto Rico can’t solve the murder of their hero of the streets, then whose murder can they solve? You’re right: If they can’t solve his murder, then what kind of luck are you are you going to have? Only about a third of murders get solved there. And they have the second-largest police force in all of the United States and its territories. They are second only to New York City. So they have this massive police force and they still can’t solve these crimes. and this crime.

Zenger: This documentary definitely appears to capture the highs, middle ground and lows of Hector Camacho. Did you sense that most of his problems came once his career was over, or do you feel like when he was at his highest point, things came too easily for him and his problems stemmed from there?

Drath: I honestly feel like you can’t pinpoint it. I even feel like in the beginning there was foreshadowing of what was to come. Even at the height of his career, there were moments where it was like, “Oh s**t, is he going to show up for the fight?” He had the networks scared. When he was on, there was nobody better. He was an unknown commodity at times. Which Camacho is going to show up?

Zenger: Showtime has this documentary exclusively. How did that come together?

Drath: I pitched it around and I talked to Showtime, and after one phone call, it was right away done. I gotta tell you, I could not be happier working with any other network. Showtime is a network that really cares about both the Latino community and about their fans and most importantly about boxing. They have just been a great network to work with. Stephen Espinoza, who is the president of Showtime Sports, is a remarkable executive who helped us in the making—in the sense of getting us great feedback and great ideas and notes. And also Vinnie Malhotra, who is out in L.A. They were just terrific. And I’m not just saying that because they funded it. They were truly great to work with.

Zenger: It premieres on Showtime on Dec. 4. What happens between now and Dec. 4 in terms of what’s going on with the film?

Drath: Believe it or not, we’re still kind of putting the final touches on it right now. With the film, putting on the graphics, mixing the music. We’ve got a month to promote it and talk about it, because we want as many people as we can get to see it. This is an important film for boxing fans and also for the Puerto Rican community, because he truly was a legend and is a legend for the Puerto Rican people and the people of Spanish Harlem, New York. And now more than ever they can use a shot in the arm. Puerto Rico has had a lot of hardships in the last eight years or so. He was killed eight years ago, Nov. 20. Well, he was shot.

Zenger: What is it about boxing that provokes you to want to do these documentaries?

Drath: I always have been drawn to the underdog no matter what. I’ve always rooted for the underdog. I mean, I’m a Mets fan, for crying out loud! Fighters usually come from hard lives, or what could be hard lives. They usually come from socioeconomically depressed lower-income families, most of the time. And they fight their way out of it. There is something so primitive yet beautiful about that. I think the sport can be so engaging. When you see a great fighter, it’s so athletic. I’m drawn to the sport because of its athleticism, and I’m drawn to the stories because of the underdog nature of them.

Zenger: I think documentaries like these show a side of humility. It shows that although fighters are looked at as brute-force athletes, they also have a sensitive side as well. I love seeing the side of fighters that documentaries like yours oftentimes showcase.

Drath: Yeah! I think that’s important. These are people. When I first started working with fighters I had no idea that they were some of the nicest, kindest and most humble human beings that I have ever met. You think fighters are going to be these angry, nasty guys, but they’re really not. This is a sport. And it’s a primitive sport, it’s a brutal sport, and they are true warriors. But almost every time, they are humble warriors.

Zenger: I cannot wait until Dec. 4 to see your work and to see this light be shed on the late great Hector “Macho” Camacho. Is there anything else you would like to add?