As Busy as a V: Bozeman Building Her Own ‘Empire’ with Acting and Music Careers

Hip-hop legends Trina and Too Short join the Grammy-nominated singer on the remix of her latest single “Juicy.” 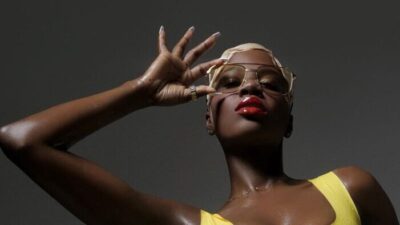 Grammy-nominated singer and actress V Bozeman returns to our playlist with her most recent hit, “Juicy” (Remix), which is available on all digital streaming platforms. V tapped hip-hop royalty Trina and Too Short for the “Juicy” remix, which put us in an ultra-sexy mood, thanks to the rappers’ salacious flair. Her upcoming scripted series, “Sacrifice,” in which she stars alongside actors Paula Patton and Marques Houston, is in production.

In the movie version of “Sacrifice,” viewers got to see the public and hidden lifestyle of the music industry through the eyes of an entertainment lawyer played by Patton. The Chris Stokes-directed film is being adapted to a series that is expected to premiere sometime in 2021 on BET+. Bozeman is busy, currently working on a new album to be released in 2021 as a follow-up to her singles. She’s also putting her acting abilities on display and she created an OnlyFans page, leaving no stone unturned to close out what has been a unique 2020.

Known for her recurring role on the Fox show “Empire,” V Bozeman has shared the studio with musical giants such as Timbaland, CeeLo Green, Rihanna and Timothy Bloom.

Zenger: V … how are you doing?

V Bozeman: I’m good, Percy. How are you?

Zenger: I’m doing great. My man Glasses Malone told me you are the dopest, so I’m looking forward to this interview.

V Bozeman: Ah, man, that’s the native right there. I love him.

Zenger: COVID isn’t slowing you down at all. You have a lot going on. How have you been able to maneuver around all this and stay so productive?

V Bozeman: You know what, it’s actually been bittersweet. It’s been a blessing and a curse. I needed to slow down in a lot of different areas and be able to focus and hone in on my artistry as far as my social media platforms, really kind of understanding the science behind that whole thing. That’s why you probably see an improvement with how I communicate with my fans on social media. So, I have been just trying to keep busy, make sure I engage 100% more (laughing), and try to look on the brighter side of things. You just gotta keep your vibrations as high as you can because there are a lot of things going on in the world, so you gotta create that balance. And of course, my artistry and my music does that. And just working on a whole new level of engagement with my fans.

Zenger: Social media can be a blessing and a curse as well. What has that been like for you — to put yourself out there more and gauge fans’ reactions to your everyday postings?

V Bozeman: You know (laughing), it’s a fine line because I’m very vocal, especially about current events and things like that and the political arena. I’m very vocal, but at the same time, I’m very relatable. I’m just like a homegirl. A lot of my supporters … maybe they didn’t know I was as relatable as I am. I really don’t know how to be any other kind of way. It’s a fine line because it’s a very sensitive time in terms of the climate is concerned. So, when I kind of peek my head through the political arena or the state of Black America arena, it gets very intense. But you know, I don’t shy away from it. I am who I am. My beliefs are righteous in my heart, so I just try to create the balance for myself. We have a good time.

Zenger: Given the fact that there is so much going on both socially and politically, I’m sure the album you are working on for 2021 is going to be very deep and thought-provoking.

V Bozeman: It really, really is. I’m very aware of my balance. Even though I know I have to engage with my fans on these social platforms, I also have to make sure I sow goodness into myself at the same time. You can become overwhelmed. I put a lot of what’s going on in the world in my music, but I also put what the homegirls is going through too on an everyday basis in our personal lives. It’s two different worlds out here. We go outside and we experience what’s happening in society and then we come home and we’re experiencing what’s happening personally in our own personal lives. I just tried to mix the two and try to engage in that way and be relatable in that way, especially with “Juicy”. People really didn’t expect me to put something so racy or provocative out. But I’m just reminding the homegirls that, yo, it’s a very heavy time now. We still have to uphold our femininity. We still have to be unapologetic about our womanism and our sexuality, and it’s OK. So, these are the little cookies and gems that I’m trying to give to my homegirls that’s like me, even though we in this climate.

Zenger: You’re a marketing genius, because when I saw a song by V Bozeman titled “Juicy” remixed featuring Trina and Too Short, I had to hear it

Zenger: You can’t go wrong with that combination.

V Bozeman: You can’t. Think about it, you got, Mtume, that’s already a legend right there. He done gave to the culture in such an amazing way, I had to keep that bar up. Too Short of course is going to come with his isms, and he’s a legend and people love and respect him. Trina is a legend. She’s been around. She’s proven herself time and time again, and those are my real friends. So, I was like, yeah, I ain’t doing this remix without these two. And they’ve never even done a song together, so I thought that was dope. Bringing hip-hop, R&B, the Bay Area and Miami together. I thought it was dope.

Zenger: And there’s something about that “Juicy” beat and melody that you just can’t go wrong flowing to that.

V Bozeman: Yeah man! You gotta show up for that one if you wanna touch that one. Thank you so much. I’m so thankful for Mtume for even clearing that for me. I was very, very humbled by that because Mtume is our gem.

Zenger: And you provided the visuals for the “Juicy Remix.” How did that come together?

V Bozeman: Man … I just really wanted to do something different. And thank God for my team at Artistry. My management, Max Gousse, Monica Payne and the amazing talent of workers that’s under that Artistry umbrella. It’s a lot of young minds there, and they come to me with all types of different ways to engage with my fans. And to keep it interesting. And it’s like this whole little thing where you want to approach things like less is more. And that’s always been my mantra. So, I figured, we’re in a pandemic, it’s very hard to do a video during a pandemic in Miami or L.A. We’re locked down in a whole lot of ways, and it’s real expensive. So, team came up with a plan where it was like, “Yo, let’s do something fly on the Facetime and give them some flava.” See, that’s where your talent gotta come in at. You know what I’m saying, like you said, Trina and Too Short, you can’t go wrong with that. Get us all on one accord and one screen, and I think magic was made.

Zenger: It’s not just the music with you. You are about to start taping a show for BET+ called “Sacrifice,” starring Paula Patton and Marques Houston. You recently started an OnlyFans page, you’re working on a new album, just dropped the remix to “Juicy.” How important is it for you to use all your talents?

V Bozeman: It’s so important now in this day and age of social media and what’s going on digitally. First of all, people get bored in 2.5 seconds (laughing). It’s just gotten that way, so you cannot put all of your eggs in one basket. By now, I guess we’ve come to find out how good you can sing or how good you can rap. You have to make sure your brand is solidified and very clear to the consumer. You can’t assume that just because you can sing a note or lay some bars. You gotta give ’em every aspect of the spectrum. You gotta give ’em fashion; you have to give them personality; you have to give ’em YouTube. They want to understand you as a person in your life and they want a front-row, center seat. It’s entertainment; it’s just leveled up in such a way that, it’s a lot. You gotta figure that brand out, and that’s all I’m doing

Zenger: You are an amazing talent and you have had the opportunity to work with some amazing talents. Tell us a little bit about “Sacrifice.”

V Bozeman: Man, thank God and the ancestors for looking out. I’m excited. I’m excited to finally show my acting chops on this new series that got picked up; 10 episodes we got picked up for. My character Tamika is so fly. She’s very cunning and witty. She’s quick, she’s fly and she’s sexy. The series … it’s a great storyline. It keeps you on the edge of your seat. I think it’s good for the culture. It’s a whole new way to look at the industry through what she does for a living, which is law. I just love the cast. I love working with Paula [Patton]. She’s like a big sister. Erica Ash is amazing in this film, Marques Houston … I’m just honored to be a part of it. I just want to thank Chris Stokes for bringing this opportunity here for us. It was a great opportunity to be a part of a Black film and do it the right way.

Zenger: You always hear “step outside of your comfort zone.” You are acting, singing, and as I mentioned, even have an OnlyFans page now. Do you have an uncomfortable zone?

V Bozeman: (Laughing). To be an artist, you have to be vulnerable. In my early years, that used to be an issue for me, being so vulnerable. But as you grow and learn and you get comfortable being solid in who you are, I’m so matter-of-fact with who I am and what I want to be. I know the pace and tone that I want to set. No, I’m not uncomfortable because I’m not going to do nothing that I don’t want to do. Everything is going to be organic. It’s going to make sense, and it’s going to be right for my spirit. Yeah … I’m not uncomfortable.

Zenger: That’s awesome. I can tell you are comfortable in your own skin. I appreciate your time; I cannot wait to see all of your endeavors come to light. Is there anything else you would like to add?

V Bozeman: Thank you so much for your time and for you spreading the word. Again, I just want to thank Trina and Too Short for joining me on this record. I’m still in awe of them even agreeing to do this. I thank all my supporters for being down with me through all of the years. It’s so much more to come. Check me out on social media. I be everywhere.

A Dollar A Day: The Human Cost Of Abused Miners

Features & Profiles Heroes No One Knows

VIDEO: The Incredible Life Of Daniel Smith, Living Son Of A Slave

The Veracruz Carnival: Out Of The Streets And Onto The Internet