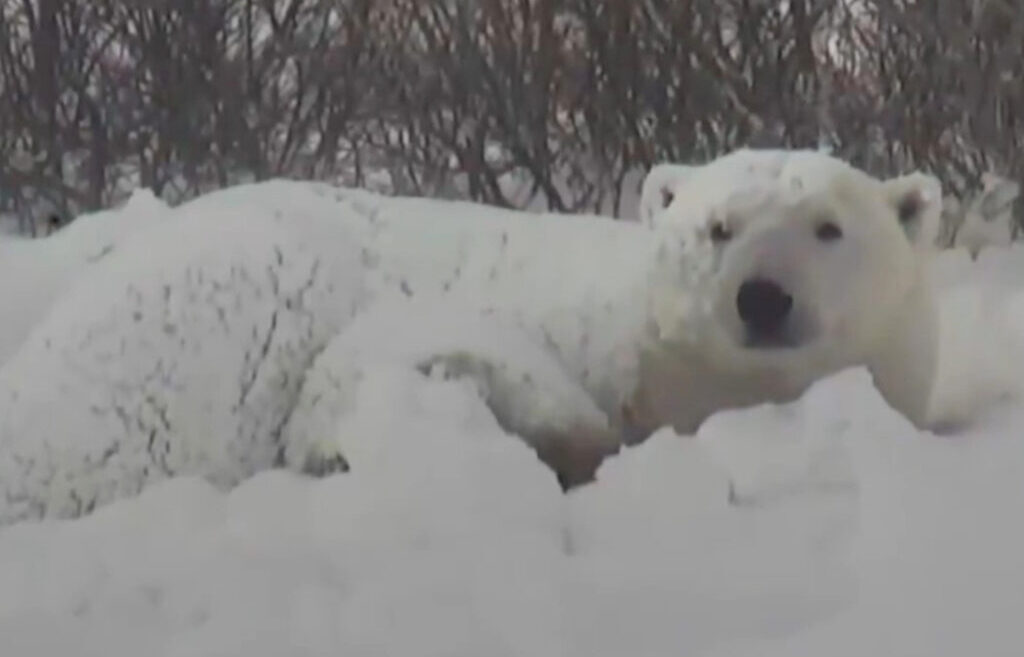 A polar bear shot in an unknown location on an unknown date blends in with its snowy surroundings -- a form of camouflage. (Clipzilla, RealPress)

CHURCHILL, Canada—Hundreds of polar bears are enjoying a fresh blanket of snow as they pass through a small Canadian town on their way to spending the winter at Hudson Bay.

A live hidden camera in Churchill, Canada, located in northern part of Manitoba province, captured the moment a snow-covered polar bear perfectly camouflages in the snow pops its head up to reveal its disguise.

The footage taken by explore.org, a philanthropic live nature camera network and documentary film channel, was shared on social media on Nov. 1. At the beginning of the video, all that can be seen is what appears to be a mound of snow. Suddenly, there is a slight movement as the polar bear hidden under the snow breathes. Then, its silhouette appears before the wild animal lifts its head and looks right at the camera.

“10/10 camouflage Mr. Bear; we thought you were snow,” explore.org said in its caption.

Residents and tourists in Churchill, known as the “polar bear capital of the world,” can see hundreds of polar bears each November as the animals travel to the freezing Hudson Bay, where they take to the ice for the winter. The town experienced its first snowfall last month, and a storm dumped more snow on the area over the weekend.

The polar bears in the region are some of the 22,000 to 31,000 that inhabit the Arctic Circle. Because its population is decreasing, the polar bear, which is the largest bear in the world at 6- to 9-feet tall, is listed as “vulnerable” on the IUCN’s Red List of Threatened Species. The animals have a thick layer of fat and water-repellent fur to keep them warm in cold temperatures, and are reliant on sea ice for traveling, hunting, resting and mating.

Wildlife enthusiasts can also spot polar bears on the Canadian tundra from July to September, and a variety of tours and excursions offer a closer look at the predators.