Several other states have also announced a ban over concerns about air pollution and Covid. 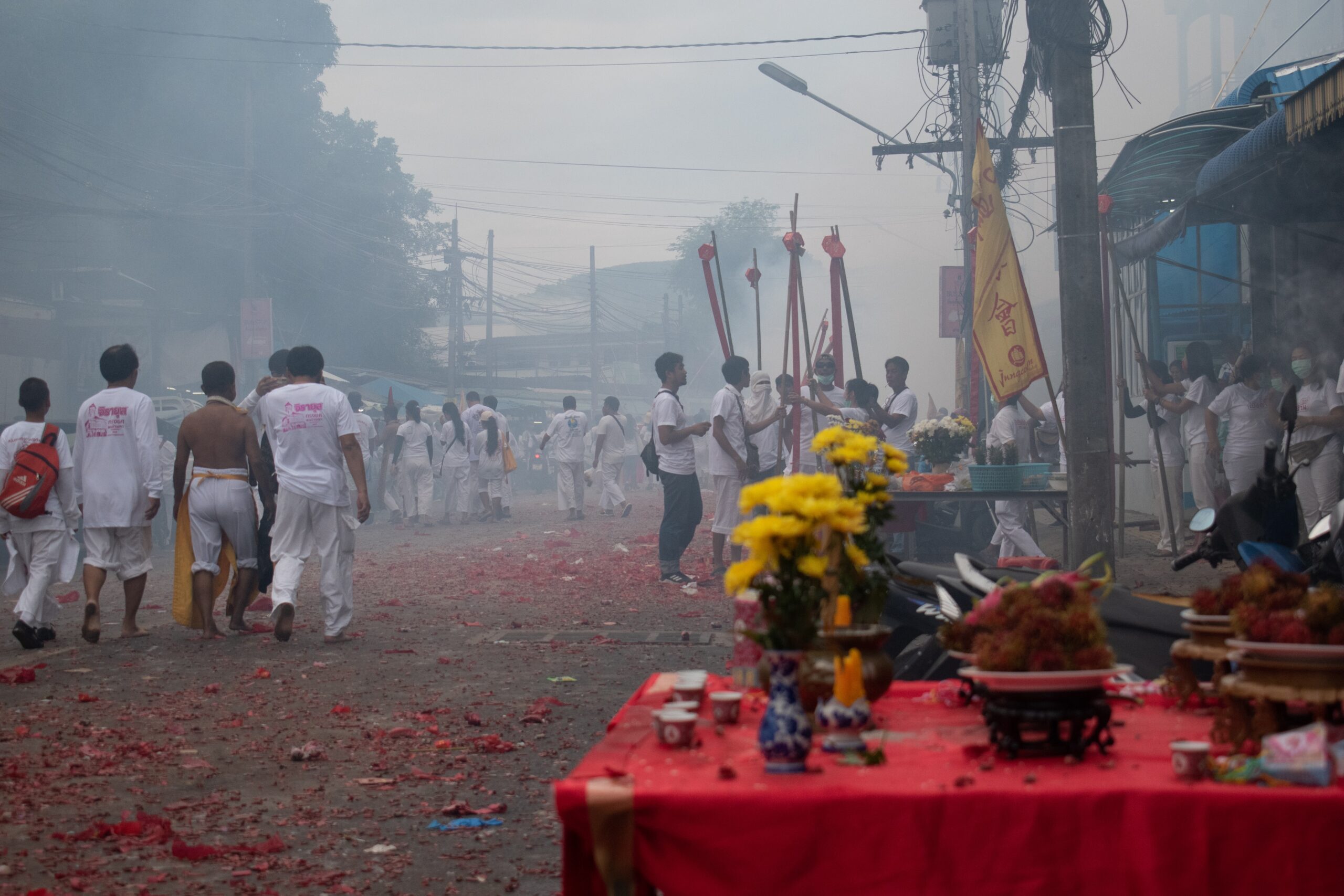 Over the years, the practice of setting off firecrackers has become a point of contention because of increasing levels of air and noise pollution Courtesy: Anna Sushok (Unsplash)

Mumbai — Worsening air quality and the pandemic have led to a ban on traditional fireworks during India’s Diwali festival this month.

The National Green Tribunal on Nov. 9 ordered a ban on firecrackers in the country’s capital of New Delhi and other cities that recorded poor air quality last year.

Diwali, also known as the festival of lights, is an important Hindu religious festival. It is traditionally celebrated by lighting oil lamps. It is believed that the light and sound of firecrackers drive away evil. But over the years, the practice of setting off firecrackers has become a point of contention because of increasing levels of air and noise pollution. Amid the pandemic this year, protests against the use of firecrackers grew stronger from all quarters.

“There are many studies that have now linked air pollution to Covid-19,” said Dr. Kedar Toraskar, chief of critical care at Wockhardt Hospital in Mumbai. “Not just Covid-19, bad air quality is a trigger for all kinds of viral illnesses. Firecrackers add to the pollution, and it is definitely a good idea to curb their use.”

Toraskar is a member of the Covid-19 task force in Maharashtra, the worst affected Indian state with more than 1.7 million recorded cases and 45,000 Covid-related deaths. The task force had recommended a curb on firecrackers.

India has recorded over 8.5 million Covid-19 cases and 126,000 deaths. New Delhi is currently experiencing the third wave of Covid-19, with the daily count of cases breaching 7,000.

“New Delhi is a classic example of the link between bad air quality and rise in Covid-19 cases,” said Toraskar.

While the ban in New Delhi and its satellite towns — together known as the National Capital Region — will come into effect from midnight Nov 9 and remain until Nov 30, the tribunal is allowing the sale of green crackers in cities where the air quality is at a “moderate” level. However, setting off firecrackers has been restricted to two hours on specific days. Other Indian states, including West Bengal, Odisha, Rajasthan, Karnataka and Haryana, had already announced fireworks bans, but later some governments made exceptions for particular days with specified times and only for the use of green crackers. 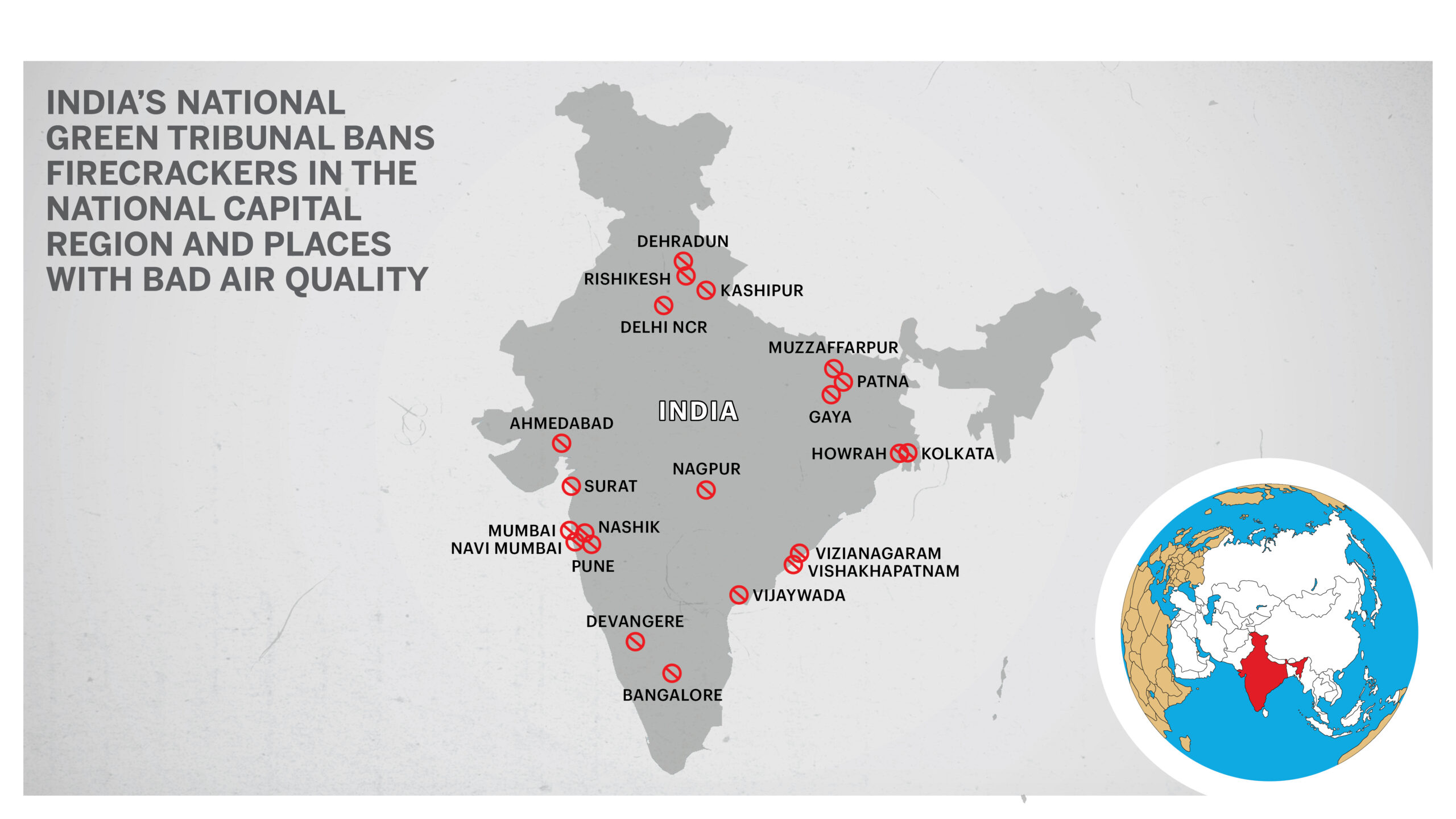 Mumbai also banned the use of firecrackers in public spaces and released a set of guidelines. The Brihanmumbai Municipal Corporation, the civic body serving Mumbai and its suburbs, has allowed setting off “mild firecrackers” within housing society compounds and courtyards of houses on the evening of Nov. 14, which is also the day for puja (making an offering) for Laxmi, the Hindu goddess of wealth and prosperity.

The bans have deeply impacted the fireworks industry in India, which was already reeling from the pandemic and the lockdown.

“My heart goes out to the people from the fireworks industry, but this is a form of toxic emission that can be completely avoided,” said Bhavreen Kandhari, a New Delhi-based environmentalist who is also a member of Warrior Moms, an organization fighting for clean air for their children.

“Air pollution is the biggest public health emergency. It is the biggest killer, and yet we don’t treat it like an emergency at all. It is unfortunate that the green tribunal has announced a ban only till Nov. 30 and has allowed green crackers. Studies have shown that green crackers are full of chemicals,” Kandhari said.

In a 2018 study, researchers analyzed hourly air quality data from 2013 to 2017 in Delhi to estimate the impact of Diwali, especially the concentration of Particulate Matter 2.5. They found that the festival led to a small but statistically significant increase in air pollution.

“Winter months see some of the worst air pollution levels in Delhi,” the study said. “Over a period of two days, Diwali adds about 40 μg/m3 [micrograms per cubic meter] to PM 2.5 particulate concentration. While this number may look small in itself, it is high considering the already poor air quality around the time.”

Another study published in 2019 looked at airborne microbes during Diwali in 15 sites across Chennai city in south India. That study showed an increase in airborne fungi due to firecrackers.

“The decision to ban firecrackers is in the right direction as the bad air quality clubbed with emissions from the firecrackers can increase the risk of Covid-19,” said Dr. Arun Sharma, director-professor, Department of Community Medicine at the University College of Medical Sciences, University of Delhi. “It is a piece of common knowledge that Delhi’s air quality level deteriorates severely during the winter months. The bursting of firecrackers during Diwali adds to this severity.”

Sharma, who is also president of the Society for Indoor Environment, said that the Covid-19 virus is believed to be airborne. “The already existing pollutants and the pollutants emitted from firecrackers create more suspended particles in the air that directly increase the risk of Covid-19 infection,” he said.