Arnab Goswami’s firm said his arrest was a “vindictive attempt to punish Republic Media Network for speaking truth to power.” 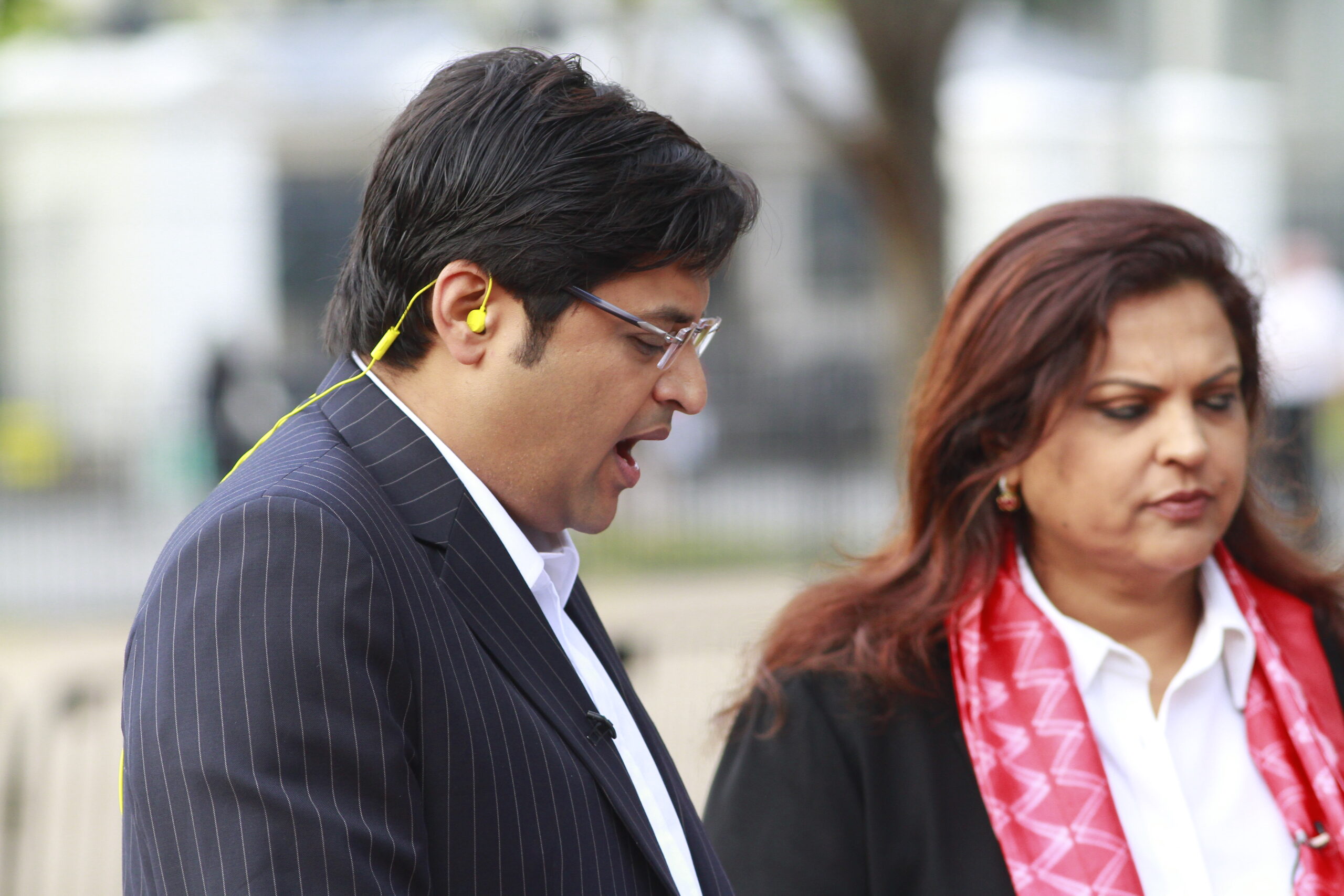 New Delhi — Arnab Goswami, a news anchor and the editor of Republic Media Network, was arrested at his residence on Nov. 4 by Mumbai police for his alleged role in abetting an architect’s suicide in 2018. His arrest in the case, which had been closed in 2019, was immediately condemned by Indian journalists and politicians.

After appearing in a local court in Alibag, a coastal town in Mumbai, Goswami was sent to jail. On Nov. 5, the court rejected a request by police to interrogate him while in custody. The Bombay High Court is yet to pronounce an order on Goswami’s petition for interim bail.

Goswami’s arrest is related to the case of Anvay Naik, 53, managing director of Concorde Designs Private Ltd., and his mother, Kumud Naik, 83, a director in the company. The two were found dead at their farmhouse in Alibaug in 2018.  Police ruled the deaths were suicide and said Anvay left behind a suicide note that mentioned three names, including Goswami’s. The note said that the three individuals owed him money for work done by his company, and purportedly specified that Goswami had not paid Naik’s company for interior design work on a studio. Naik’s note reportedly said the nonpayments were the reason for him taking his life.

Republic TV on Nov. 4 issued a statement refuting the claim: “ARG Outlier Media Pvt Ltd [owner of Republic Media Network] has paid over 90 percent of the amounts due to deceased Anvay Naik’s company Concorde Designs Pvt. Ltd. (CDPL) as per the terms of the work orders issued, over two years ago. The remaining sum was to be paid on completion of the pending work, which has since not been undertaken.

“It is put on record that despite multiple meetings, emails, letters and WhatsApp messages reaching out to CDPL, Mrs Akshata Naik, and Ms Adnya Naik regarding ARG Outlier Media Ltd’s willingness to ensure a full and final settlement, no concrete response has been received.”

Journalists and politicians, including the ruling Bharatiya Janata Party (BJP), condemned the arrest.

Goswami’s media firm said, “Arnab Goswami’s arrest in a mocked-up suicide case is an attempt to regurgitate a closed case in a motivated, malice-ridden and vindictive attempt to punish Republic Media Network for speaking truth to power.”

The media company also claimed Goswami and his family were assaulted by the police. Various videos have been making the rounds of social media showing Goswami’s interactions with the police officials after his arrest.  In one video, Goswami is seen pointing toward the police at his residence and saying, “These are the people who assaulted me.”  In another video, police officials are seen asking Goswami to come out of his residence and trying to pull him out as he attempted to close the door. The video shows the officials reading him the details of the 2018 case and the sections of the law under which he was being arrested.

Javed Mulla, a spokesperson for the Raigad Police, said Goswami’s arrest came after the investigation was reopened with permission from the court. Feroze Sheikh and Nitesh Sarda, the two others named in Naik’s suicide note were also arrested.

Anil Deshmukh, Maharashtra’s home minister, ordered in May of this year that Naik’s suicide case be reinvestigated. The investigation had been closed in 2019 when the then-BJP-led government headed the state Assembly.

After Goswami’s arrest, various members of the Indian government, including union ministers and senior BJP leaders, condemned the police action, saying it reminded them of the state of emergency imposed by former Prime Minister Indira Gandhi from 1975-77. Gandhi belonged to the Congress party, which is now in opposition.

“Congress and its allies have shamed democracy once again. Blatant misuse of state power against Republic TV and Arnab Goswami is an attack on individual freedom and the fourth pillar of democracy. It reminds us of the Emergency. This attack on the free press must be and will be opposed,” Home Minister Amit Shah said.

Prakash Javdekar, the information and broadcasting minister, tweeted: “We condemn the attack on press freedom in Maharashtra. This is not the way to treat the press. This reminds us of the emergency days when the press was treated like this.”

Maharashtra is ruled by the Shiv Sena, a right-wing Marathi regional and Hindu nationalist political party, in alliance with the Congress party and the Nationalist Congress Party.

Some ministers who voiced their concerns about Goswami’s arrest were asked why they were silent when other journalists were arrested in BJP-ruled states.  Critics also point out that India ranked 142nd out of 180 countries on Reporters Without Borders’ World Press Freedom Index in 2020.

Goswami and his channel have been regularly accused of running campaigns against activists and politicians who are opposed to India’s ruling party.  He often attacks the opposition during his loud and shrill prime time debates and has not been shy about expressing his dislike for the “Lutyens Media” — a term he uses to describe the liberal journalists of New Delhi.

Earlier this year, Maharashtra authorities investigated Goswami for broadcasting alleged communally provocative content on the lynchings of Hindu monks in Palghar, a town in Maharashtra.  Further, his network is one of four channels under investigation for allegedly inflating viewership figures. The figures are crucial for organizations placing advertisements on these channels. The investigations have led to a standoff between  Goswami, his firm and the state government.  Earlier, Goswami had demanded the resignation of Mumbai Police Commissioner Parambir Singh.

Some journalist groups, nonetheless, are divided in their reaction to the arrest.

The Editors Guild of India, which previously was critical of Republic TV’s conduct, said it was shocked to learn of Goswami’s arrest. It called upon Maharashtra’s chief minister to ensure Goswami is treated fairly.

The TV Journalists Association Maharashtra tweeted, “Mr. Goswami has been arrested in a case filed against him related to a personal matter. It isn’t associated with his profession.”

The News Broadcasters Associations said it was “dismayed by the manner in which he was arrested. Even though we do not agree with his type of journalism, we denounce retaliatory action, if any, by the authorities against a media editor. Media is not above the law, but the due process must be followed.”

The Supreme Court of India, on Nov. 6, granted Goswami protection from arrest in the Maharashtra Assembly’s breach of privilege motion case filed in September this year.

The motion was brought in state Assembly on Sept. 16 for Goswami’s use of derogatory language against Maharashtra Chief Minister Uddhav Thackeray and NCP chief Sharad Pawar.

The Supreme court had also issued a notice of contempt to the secretary of the Maharashtra Assembly for writing a letter to Goswami on Oct. 13.  The letter, according to the court, breached the confidentiality of the Assembly’s proceedings by approaching the top court.

Painting, Music, And Rugby — The Hidden Talents Of Bollywood Stars

VIDEO: Snowboarding Prodigy Wins National Youth Championship For U8s At The Age Of 5

The Girl On The Bicycle

VIDEO: Step Too Far: Mum Who Bedded Stepson Shows Off Their Newborn Baby