Endangered Camel Calves Get A Kick Out of First Snow

Denver Zoo’s ‘ships of the desert’ played soccer while seeing white stuff for the first time. 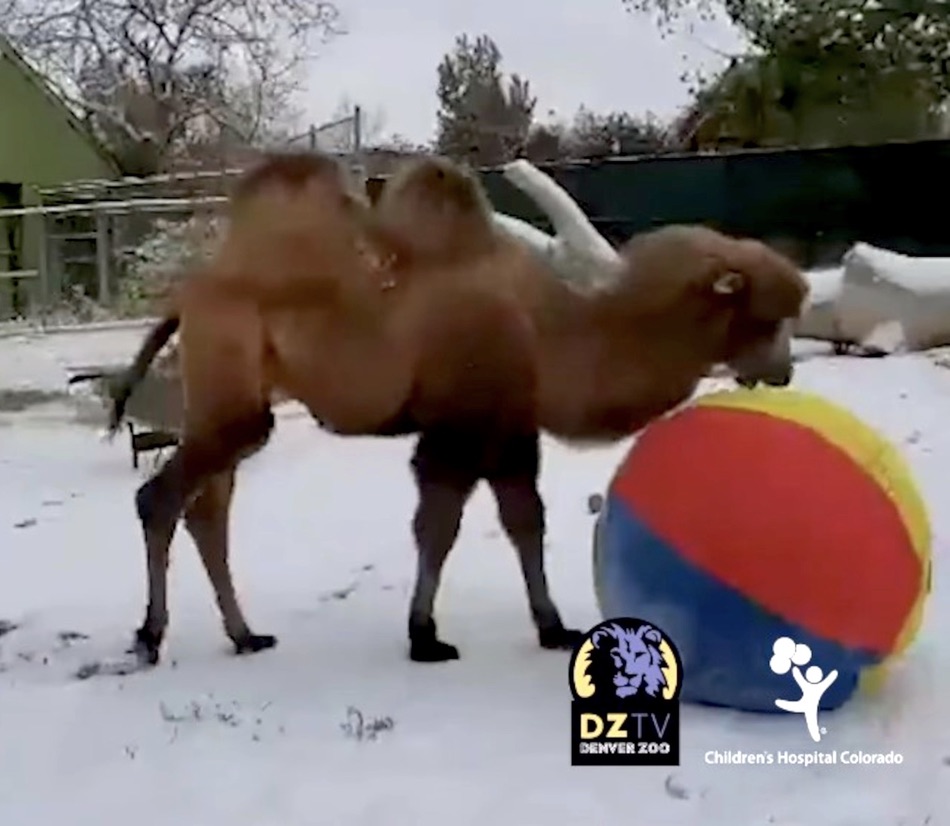 Endangered camel calf, also known as Bactrian, play in the snow for the first time. (@DenverZoo/Clipzilla)

DENVER—Two baby Bactrian camels enjoyed their first snow with a game of soccer at a Colorado zoo.

The Denver Zoo shared footage of their play session on social media on Oct. 26. In the video, the 6-month-old calves, named Hagrid and Sprout, can be seen playing with inflatable balls with a blanket of snow on the ground as their caretaker watches.

“While we humans are poorly equipped for this weather, some of our Mongolian species are equipped for the average -30 °F winter temperatures their wild cousins survive in,” the zoo said of the camels, which arrived there in August.

The Bactrian camel, (Camelus ferus), lives in Central Asia from Afghanistan to China, primarily in Mongolia’s Gobi desert. The animals, often called the “ships of the desert,” can survive months without water and can drink up to 35 gallons at once. They have two humps on their backs, which store fat and convert energy, and a third eyelid that washes sand or dirt out of their eyes, much like a windshield wiper. Their diet mostly consists of thorny plants, and they tend to travel in groups as large as 20.

Growing up to 10 feet long and weighing between 1,300 and 2,200 pounds, Bactrian camels are the largest animals in the desert and have thick, wooly coats for warmth and insulation during the winter, which they shed in the summer. They can survive in temperatures ranging from as high as 122 degrees Fahrenheit to as low as minus 20 degrees Fahrenheit.

The species is currently listed as “critically endangered” on the International Union for Conservation of Nature’s Red List of Threatened Species. Nearly all the remaining 1.4 million Bactrian camels are domesticated, with fewer than 1,100 living in the wild today. While wolves are their natural predators, loss of habitat presents the greatest threat to the survival of the species.