Losing her limbs hasn’t stopped Pratibha Hilim from toiling to tutor the children of her village in India. 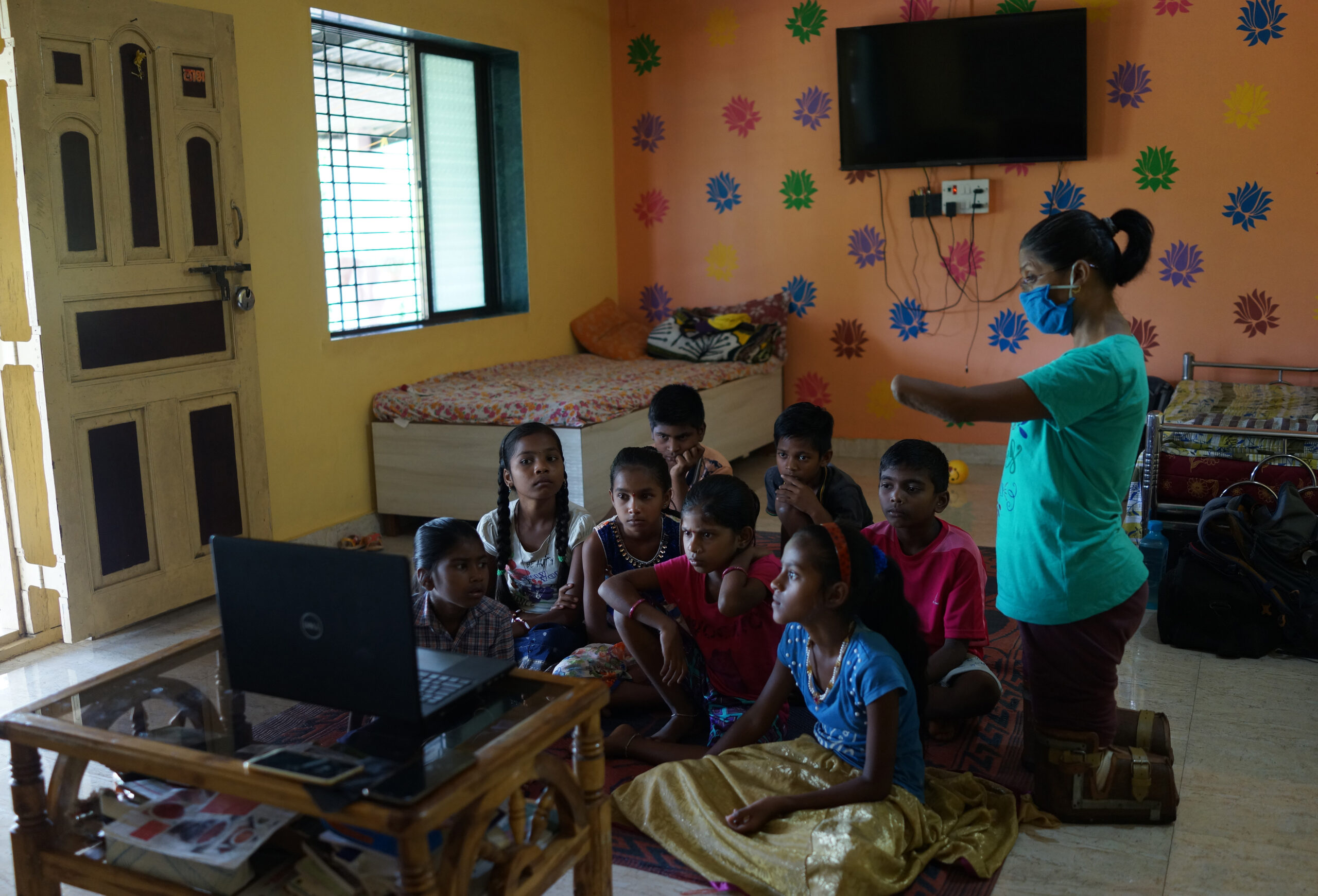 “Good morning, teacher,” a loud and clear chorus rings out as Pratibha Hilim, enters the veranda of her home in Maharashtra’s Karhe village, in Palghar district, where an open-air class is underway.

Hilim, a bilateral amputee, is a Zila Parishad (district body) school teacher, who has taken on the task of teaching the students of her village, free of cost, in her own home. And she has been doing so for the last five months, through the Covid-19 lockdown.

Brimming with energy and seemingly oblivious of her bilateral amputee condition, the 50-year-old decided to tutor children instead of remaining idle through the lockdown, when schools in India have been shuttered.

“I have spent 25 years of my life teaching; I can’t just sit at home doing nothing,” said Hilim.

In India, students in rural areas have been having a tough time keeping up with online education, as they often have no access to computers, smartphones, or the Internet. Hilim has helped bridge the gap by teaching junior school children various subjects like English, Marathi (the language spoken by the majority of people in Maharashtra), math, history, science, geography, and civics.

Hilim’s fortitude is remarkable considering that just over a year ago, in June 2019, she lost her limbs after complications from dengue fever, a mosquito-borne disease with a high mortality rate that strikes India in the rainy season every year.

“It was work as usual in the paddy fields just two days before I was to join a new job at Rahnal Zila Parishad School in Bhiwandi Taluka, Thane,” said Hilim. “I felt feverish and uneasy on the day I was to join work, and before I knew it, I had fallen unconscious. My son, Sumit, rushed me to the local private Pramila Hospital in Thane.”

“Looking at my deteriorating condition, I was referred to the “super-specialty” Jupiter Hospital in Thane where I was diagnosed with dengue fever. The next day, my hands and feet developed an unbearable burning sensation and turned black.”

“I was not satisfied with the treatment at Jupiter Hospital, so I decided to move her to the government-run JJ Hospital, where doctors amputated her left hand and both legs,” said Pratibha’s husband Pandurang Hilim.

Pandurang suggests that there may have been negligence on the part of Jupiter Hospital but has not taken any legal action so far.

“I did not pursue the negligence case fearing that I would lose my government job if they filed a counter-complaint against me,” said Pandurang. “The people running private hospitals are an influential lot. Besides, I was not in a state to fight a legal battle when I saw Pratibha’s condition after the operation. I am still in debt. Jupiter Hospital charged me INR 15 lakh (USD 20,000) for her treatment.”

Jupiter Hospital refuted all claims of negligence when Zenger News got in touch with them.

“Patient Pratibha Hilim had come to Jupiter Hospital with severe shock, very low blood pressure, and progressive multi-organ failure. She had to be first stabilized and resuscitated,” said a Jupiter Hospital statement. “The patient was diagnosed with tropical fevers—rickettsial fever and dengue shock syndrome. During the disease, she developed vasoconstriction, gangrenous and ischemic changes in the limbs and myositis. In such cases, usually, the mortality rate is very high (sic).”

“We had a multi-specialty team involved in treating the patient, including a senior physician, infectious disease specialist, hematologist, nephrologist, intensivist, and a hand surgeon. With the tireless efforts of the team, the patient’s life was saved. The family was counseled time and again right from the time of admission.”

Hilim is still on sick leave without a salary for almost a year now and is eagerly awaiting her medical fitness certificate so that she can resume her duties at Bhiwandi Zilla Parishad school.

Now recovered from her nightmarish experience, Hilim has kept her spirits high by learning news skills that her condition now demands.

“Look at my handwriting,” Hilim says enthusiastically as she tries to turn a leaf of her notebook that is filled with her writings. “I use a circular belt that has been customized to hold a pen/ chalk in my right hand and fine-tune my writing skills.”

She also exercises, walks on prosthetic limbs, does not miss her daily yoga, and her morning, and post-dinner walks, as advised by her doctors.

However, even with the considerable degree of independence that Hilim has achieved, she still requires considerable care. Sumit had to quit his job to be with his mother, while younger daughter Dr. Mahi Hilim, who is pursuing a Bachelor of Ayurveda Medicines and Surgery (BAMS) degree, has to help her mother in everyday tasks like combing her hair and eating her meals.

“We are looking for a full-time attendant for my mother so that we can pursue our further studies and focus on our careers,” said Sumit who wants to complete his degree in engineering. He regularly takes his mother for her doctor’s appointments and physiotherapy sessions.

Hilim is more concerned about the education of the village children than her own problems. She stresses about the drop in attendance of kids from the mostly tribal belts of Jowhar, Palghar, and Mokhada

“I have accepted my reality. My interest in farming and gardening keeps my worries away, while teaching remains my passion

Hilim waits for the day when she will get artificial limbs from the Department of Prosthetics and Orthotics at the All India Institute of Physical Medicine and Rehabilitation in Mumbai. However, with doctors busy with the Covid-19 pandemic, it may be a long wait.