Rare Albino Python Rescued and Released into the Wild

There is a thriving underground market for wildlife in Sri Lanka 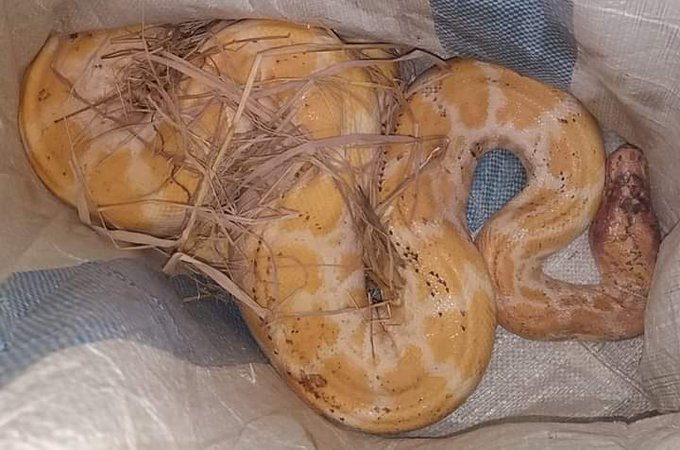 The rescued albino python at Ritigala. (Courtesy of Prasad Welikumbura)

An Indian rock python was rescued by the Department of Wildlife (DWC), Sri Lanka, from Ritigala last month. Although the Indian rock species is common in Asian countries, this python found in the North-Central part of Sri Lanka was an exotic albino variety.

“This is the first time that an albino python has been found in Sri Lanka,” said Dr. Tharaka Prasad, director of health, Department of Wildlife. “There is a high demand for rare animals like this python.”

“A villager had caught this python and tried to sell it at a high profit, but he failed,” said Prasad. “The DWC was alerted by a person from the Ritigala ranges (a forested mountain range in central Sri Lanka) and the python was swiftly rescued. The investigations are still underway to find out where this specimen was being taken to be sold.”

“Wildlife trafficking is a USD 15 billion business and most exotic reptiles are sold as pets in the European market,” said Ravi Perera, the Founder of Serendipity Wildlife Foundation.

With whitish skin with honey brown patches, the reptile showed some signs of injury and was taken by the DWC for further investigations. Albinism is a genetic disorder that causes the skin, hair, and eyes to have a little color or no color at all. It’s a condition that can be found in humans as well as animals.

“Normally, the DWC rescuers look for injuries on the head when they rescue a creature, and the discoloration on the head raised a suspicion that it might have been injured. However, closer examination revealed that there were no significant injuries caused to the reptile,” said Prasad.

“Initially, we had plans of handing it over to the National Zoo, but we changed our mind when the National Zoo refused to take the reptile, and there was no point of keeping it with the DWC. So, it was decided that it should be released into the best possible environment where it would not be at further risk,” said Prasad.

After a week-long discussion, the python was released into the wild.

The National Zoo in the past has been accused of negligence. In 2016, many animals were missing and over 300 animals died due to lack of care.

All Ceylon Wildlife Officers’ Association (ACWOA) had strongly opposed the original plan to move the animal to the Dehiwala Zoo.

The python was found in an area used for Chena cultivation—a 5,000-year-old farming practice where staple food like rice is grown in paddy fields, while vegetables, greens, grains, and cereals are cultivated in rain-fed lands called “Chenas.”

Chena land is marked by clearing an untouched forest area, setting it ablaze, and cultivating it soon after. The forest starts to re-grow in the deserted land after a couple of months. When the trees grow about a foot tall, the semi-wild growth is cleared and the forest is again set ablaze for cultivation.

Deforestation and illegal activities have posed a threat to wildlife in Sri Lanka, and Muhadiram Sethi, wildlife activist, fears that there is a risk involved by releasing the python into the wild.

The Flora and Fauna Protection Ordinance has been effective in protecting wildlife but the country’s systems have failed to introduce conservation programs suitable for modern time.

“DWC should practice modern methods of dealing with such issues and implement native programs that teach people to coexist with wildlife for better conservation. It should get rid of the old methods such as caging and elephant holdings,” said Sethi. Elephant holding grounds are places where these animals are penned in to avoid them causing any problems to crops and habitation.

The Veddas, the indigenous natives of the island, co-existed with wildlife, and this method caused minimal conflict between humans and animals.

“Sometimes modern-day solutions are nothing but old practices,” said Sethi.

The Indian rock python, also known as the Python Molurus, is a species that moves only when there is a scarcity of food, or feels threatened.

“It’s natural for pythons to be found in Ritigala because of the many streams that dot the area,” said Tharaka.

The Ritigala Forest Reserve is situated in Anuradhapura, about 39 miles (ca. 63 km) from the Wilpathu National Park. According to an Auditor General report, Anuradhapura had purchased the highest number of Thunder and serpent flares—firecrackers to keep elephants and snakes away. In September this year, 100 acres of forest cover close to the national park was sawed down for timber and burnt entirely.

The cabinet has decided to allocate Other Forest Lands—a term used to designate areas that are not gazetted as forest lands—for economic activities.

Environmentalists say that natural resources and wildlife in these forests are going to be jeopardized because of this move.