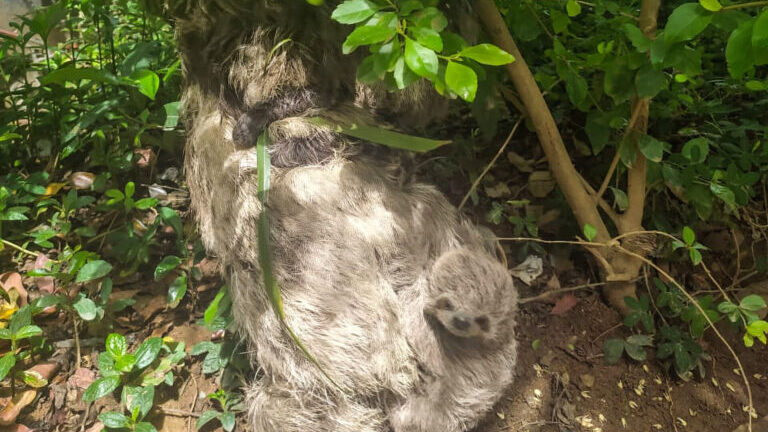 TEOFILO OTONI, Brazil—Most sloths prefer spending their time in the tropical rain forests of Central and South America. But that’s not the case in Teofilo Otoni, a city of about 135,000 residents in southeast Brazil, where a group of eight to 10 sloths has taken up residence in a town square — and experienced a spate of births in recent months.

The most recent delivery took place Oct. 28 in Tiradentes Square, the city’s center.

“About two months ago, two females had cubs, and recently, we were surprised that one of those females had a newborn cub, which you can see in the video, still with the placental remains,” said biologist Janaina Mendonca Pereira, who filmed the latest birth and shared it with Zenger News. “We were surprised because it’s very rare. The time between one baby and the other was short, so it was probably a simultaneous pregnancy.”

Mendonca, who is also the municipality’s secretary for the environment, said up to 30 sloths once inhabited the urban square. But no one knows how they got there in the first place.

Known for their slow movements, sloths generally spend the majority of their time hanging upside down from trees in the rainforest. Though staying high in the trees helps them evade predators, the forests they call home are  vulnerable to deforestation, the World Wildlife Federation notes.

The specific species of “townie” sloths was not disclosed by Mendonca, but they appear to be of the three-toed variety.

Mendonca and her team hope to resume monitoring the sloths after pandemic restrictions are lifted. Brazil has been one of the countries hit hardest by the pandemic. As of Nov. 2, tracking by the World Health Organization shows it has experienced more than 5.5 million confirmed cases of COVID-19 and just under 160,000 deaths.