Researchers used a GPS tracker to follow the maiden flight of an eagle named Davina, from Austria all the way to Belarus.
By Les Steed November 5, 2020
Facebook
Twitter
Linkedin
Email 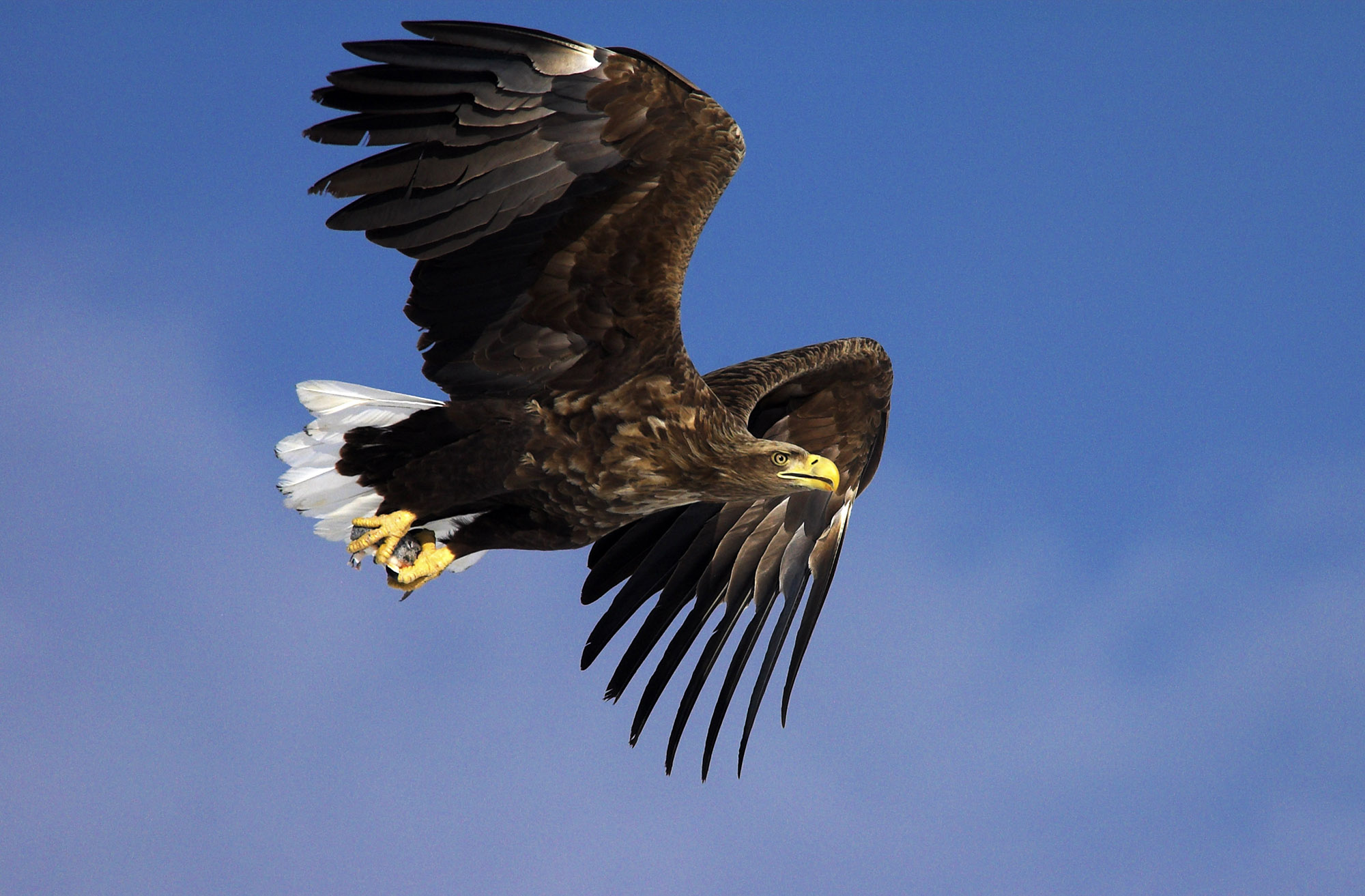 VIENNA — When you’re a 10-pound white-tailed eagle with an eight-foot wingspan, you can safely fly just about anywhere you want. But when Davina set a distance record on her very first maiden migration flight, scientists gawked and wowed anyway.

Davina hatched in March at the Donau-Auen National Park in Vienna, Austria, and first left the nest in June. Her odometer had 1,864 miles on it when she returned home three months later, making her trek the farthest eastern migration ever measured by the World Wildlife Fund for Nature—the group known in the U.S. and Canada as the World Wildlife Fund.

It wasn’t a real odometer. It was better – a GPS tracker that reports both how far an animal travels and exactly where.

Tracking bird migrations is part of a long-term research and conservation project by the WWF at Donau-Auen, where guests can visit an exhibit that kept tabs on Davina’s flight path, and will do it again for a new crop of young birds next year.

Davina crossed parts of Poland, the Czech Republic and Slovakia, and spent a short time soaring through Lithuanian airspace, before heading home with a short stop along the Baltic Sea.

“Telemetry helps us to learn more about the birds’ migration behavior, where the birds rest and where their breeding places are. The fate of each bird can be tracked precisely,” Pichler said. “This helps to better assess the threats to eagles and thus to develop suitable protection measures.”

Those threats include collisions with electricity-generating wind turbines, he said, an unintended consequence of going green.”We have never before been able to document such a long journey of Austrian white-tailed eagles to Eastern Europe. This underlines the importance of cross-national conservation measures, without which the animals will not be able to return to their original home to raise their own offspring”, Pichler said.

The white-tailed eagle is Germany’s national bird, and a close biological relative to the bald eagle, America’s avian emblem since 1782. Austrians call them “sea eagles,” but they’re scattered all across Eurasia. Fully grown, they linger in rocky coastline environments, waiting for the chance to feed. The juveniles—a word that described Davina when she left Vienna—usually remain inland.

There they perch in the trees above large bodies of water, nesting and storing energy for their next opportunistic hunt. Their targets might be fish or small mammals, or carrion left behind by other winged or four-legged hunters.

It’s common for white-tailed eagles to use their intimidating presence and the element of surprise to steal food from other predators.

Several countries considered the species endangered or extinct through most of the 20th Century. But conservation projects, laws targeting poachers and regulations limiting pesticide use have turned things around. Now the International Union for the Conservation of Nature says Davina’s kind are a species of “least concern.”

There are 12,000 white-tailed eagles in Europe today. Some were spotted above the plains of Southern England this year for the first time in 240 years following their release on the Isle of Wight in a bid to repopulate them.

Davina’s expedition, which took her far away from her place of birth, is a normal thing for an eagle, Pichler said, an important way for birds of prey to expand their habitats over time, maintain population density and ensure genetic diversity. “However, we have never documented such a long journey by a young Austrian eagle across Eastern Europe before.”

Austria offers a suitable habitat for around 35–40 breeding pairs of white-tailed eagles. Donau-Auen covers nearly 36 square miles in Vienna and Lower Austria. Five breeding pairs raised a total of six eaglets in the park’s wetlands during the 2020 season.

The three other Austrian eaglets in this year’s telemetry study were named Diane, Dante and Darius. Facebook voters who chose the winning names weren’t as excited about calling them Dania, Donata, Dunya, Donato, Douglas or Dylan.

Diane lost her tracker in June, but the other three birds never stopped providing information about their whereabouts. Dante has been making circles in the Vienna–Bratislava area and in the northeastern Austrian region of Waldviertel. Darius flew mostly to the Czech Republic.

Eagles across Europe build nests and reuse them year after year, coming back to the same sites for generations. One nest in Iceland has been in use for more than 150 years.

Davina will sexually mature between age 4 and 6, and she will stick with one mating partner for life. White-tailed eagles perform elaborate calls and screeches to attract the opposite sex, often forming a vocal duet that can be heard far above the forest floor.

Pairs perform courtship dances, taking deep headfirst dives from high altitudes while interlocking their claws. It’s part carnival ride, part death-spiral. They hold on to each other until the last possible moment, skirting death every time.