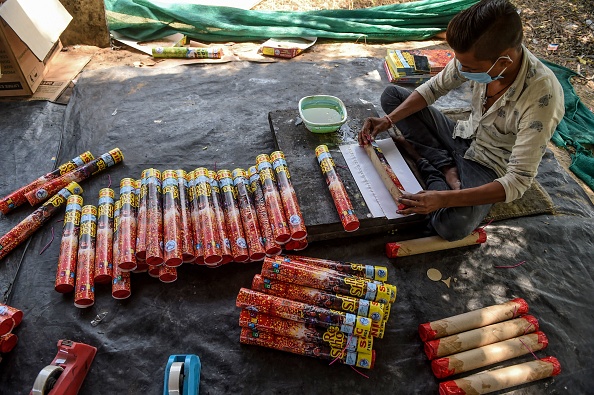 A worker prepares firecrackers at Sonic Fireworks in Vaanch village, some 20 km from Ahmedabad on October 23, 2020, ahead of the Hindu 'Diwali' festival or the Festival of Lights. (Courtesy: SAM PANTHAKY/AFP via Getty Images.)

New Delhi — Marieswaran, who runs a small-scale firecracker factory in India’s firecracker capital Sivakasi, saw sales dip 25 percent lower than usual this year and was waiting for the Diwali festival to bring some cheer. But a state government ban on firecrackers has left him with no option but to shut down his business.

In addition to Marieswaran, hundreds of other fireworks manufacturers in Sivakasi fear they’ll have to shut down. The town, in Virudhunagar district of Tamil Nadu, has around 1,000 manufacturing units and supplies products to the whole of India. The yearly turnover of India’s firecracker industry is typically about INR 5,000 crores ($ 672 million).

This month, however, the National Green Tribunal, established by parliament in 2010, issued notices to 18 states and union territories regarding a possible ban on firecrackers. The tribunal heard a plea by the Indian Social Responsibility Network seeking remedial action against the use of firecrackers in order to reduce the severity of the Covid-19 pandemic.

Referring to a monitoring report by the Central Pollution Control Board stating that the air quality in 122 cities in 18 states was beyond the norms set by the Air Act in mid-August, the tribunal said it might have to consider prohibiting the use of firecrackers “to protect the health of the vulnerable groups in these cities.”

On Nov. 1, Ashok Gehlot, chief minister of Rajasthan, issued a state ban on the sale and bursting of firecrackers “in order to protect the health of Covid-19 infected patients and public from poisonous smoke emanating due to fireworks”

“In this challenging corona pandemic time, protecting lives of people is paramount for the government,” he tweeted.

A similar ban in “public interest” has been issued in the states of Odisha, Sikkim, West Bengal, and Delhi.

Responding to the bans in Rajasthan and Odisha, the member of parliament from Virudhunagar district, B.Manickam Tagore, wrote to the states’ chief ministers urging them to allow the sale of “green” fireworks.

Following a Supreme Court order on Oct 23, 2018, CSIR-NEERI (the National Environmental Engineering Research Institute), created and funded by the central government, took up the “green cracker” project. Firecrackers that cause 30-35 percent lower emission of particulate matter (PM10 and PM2. 5) and 35-40 percent lower emission of sulfur dioxide) and nitrogen oxide are categorized as “green crackers” by CSIR.

Industries registered with the institute can use the chemical formulated by CSIR-NEERI. These crackers release water vapor, not dust, and are not as loud as standard firecrackers.

“Most of the manufacturers have shifted to green crackers since their development,” said Manickam. “When the government has itself approved the green fireworks after detailed studies, why is it averse to their sale?”

“This last moment ban is inconsiderate of both manufacturers and traders,” said Marieswaran, who employs around 100 workers in his factory. He has been associated with the firecracker industry for the last 24 years.

“We manufacture goods as per the quantity of orders received. We have fixed clients, and most of them make payments from the money they make after selling off the procured goods. We have already dispatched our manufactured products to retailers in different states. If I don’t get my dues, how will I pay my employees?”

“More than 1 million people are dependent on the firecracker industry. In Sivakasi alone, there are 600,000 people employed in this sector,” said Raja Chandrashekaran, president of the Federation of Tamil Nadu Fireworks Traders.

He said 300,000 workers are employed directly, “whereas more than 300,000 are involved in indirect jobs like printing boxes, folding boxes, tube making, weighing of raw materials, etc. If the poor sales continue even after Deepawali, many companies will shut down leading to huge unemployment.”

Wholesalers and retailers also are staring at huge losses due to the recent bans.

Faced with huge losses throughout the year and now the ban, many fireworks retailers in Rajasthan have already started exploring other livelihood options, said Deepak Lalwani, owner of Rama Firework Traders, a 70-year-old wholesale company in Udaipur, Rajasthan.

“Had the ban come a month early, we wouldn’t have procured goods in such huge amounts or wouldn’t have ordered goods at all. We haven’t been able to sell the crackers we ordered in the beginning of the year. We lost the entire summer wedding season to the pandemic and now this ban comes all of a sudden,” Lalwani said.

As for employment opportunities in Virudhunagar, Chandrasekaran said, “Fireworks is the only thriving industry here. There are matchmaking industries, too, but mechanization has killed many jobs. Sivakasi has a dry climate and is unfit for farming activities.”

Both Manickam and Chandrasekaran said that intervention by the central government is required if the country is to save the fireworks industry from collapsing.

“The ruling party that goes around giving slogans of Atmanirbhar Bharat (the Self-reliant India campaign) has entirely neglected the fireworks capital of India. Despite following all government protocols, it is Sivakasi’s industry that is suffering, while the illegal sale of Chinese crackers goes unchecked.”

The Chinese crackers are not only harmful to the environment, but also defy Explosive Rules, 2008 as they contain banned chemicals, including red lead, copper oxide and lithium, among others. Strict anti-pollution norms and regulatory uncertainty over the years have given birth to a flourishing market for cheap black-market imports from China.

India is the world’s second-largest fireworks manufacturer, behind China, which accounted for 94 percent of fireworks imports by the United States in 2019. India’s Petroleum & Explosives Safety Organization prohibits the import and export of fireworks.