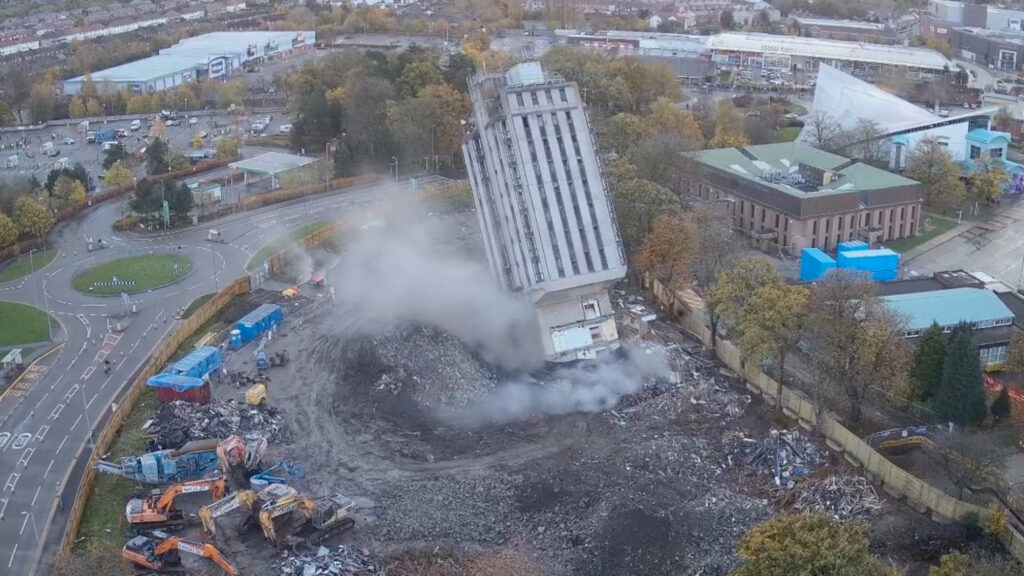 Drone shot of the demolition of former police station in Wexham, Wales (Newsflash)

The controlled-demolition took place in Wrexham in North Wales on Nov. 1.

“End of an era for Wrexham and North Wales Police. We used a drone to assist in clearing the site,” the North Wales Police said on Facebook. “We now have a fit for purpose Divisional HQ in Llay and a town centre station at the Oriel/Library.”

The local council said the controlled demolition was filmed via drone for the TV show, “Scrap Kings.” The drone was fitted with heat-sensitive cameras to ensure no one was nearby when the demolition took place. They were also used to record the demolition of the tower at the former station.

Local authorities set up roadblocks in the area to protect the public and stop an unwanted crowd gathering during the pandemic. Prior to the demolition, the council warned residents to “stay away from the area.”

Gavin Nicolas, project manager for Total Controlled Demolition Services, said the police station fell in the direction of the Asda garage and “concertinaed at the base,” allowing the rest of the tower to crumple under its weight “exactly as we planned it.”

Supermarket giant Lidl applied to have the building demolished in 2018 to make way for a new 1,325-square-meter store.

After leaving the 1970s-style tower, North Wales Police moved into a $2.4 million station in Wrexham with a $27.7 million divisional facility in Llay.

In July, discount supermarket chain Lidl, part of the German-owned Schwartz Group, announced it would open one store per week in the next six months, creating up to 1,000 new jobs by the end of 2020. These 25 new stores will be opened across various regions, including England, Scotland and Wales. Plans for 2021 and 2022 include the opening of 100 additional stores across Great Britain.