The exercise takes place at a time when India is locked in an army standoff with China along the Line of Actual Control. 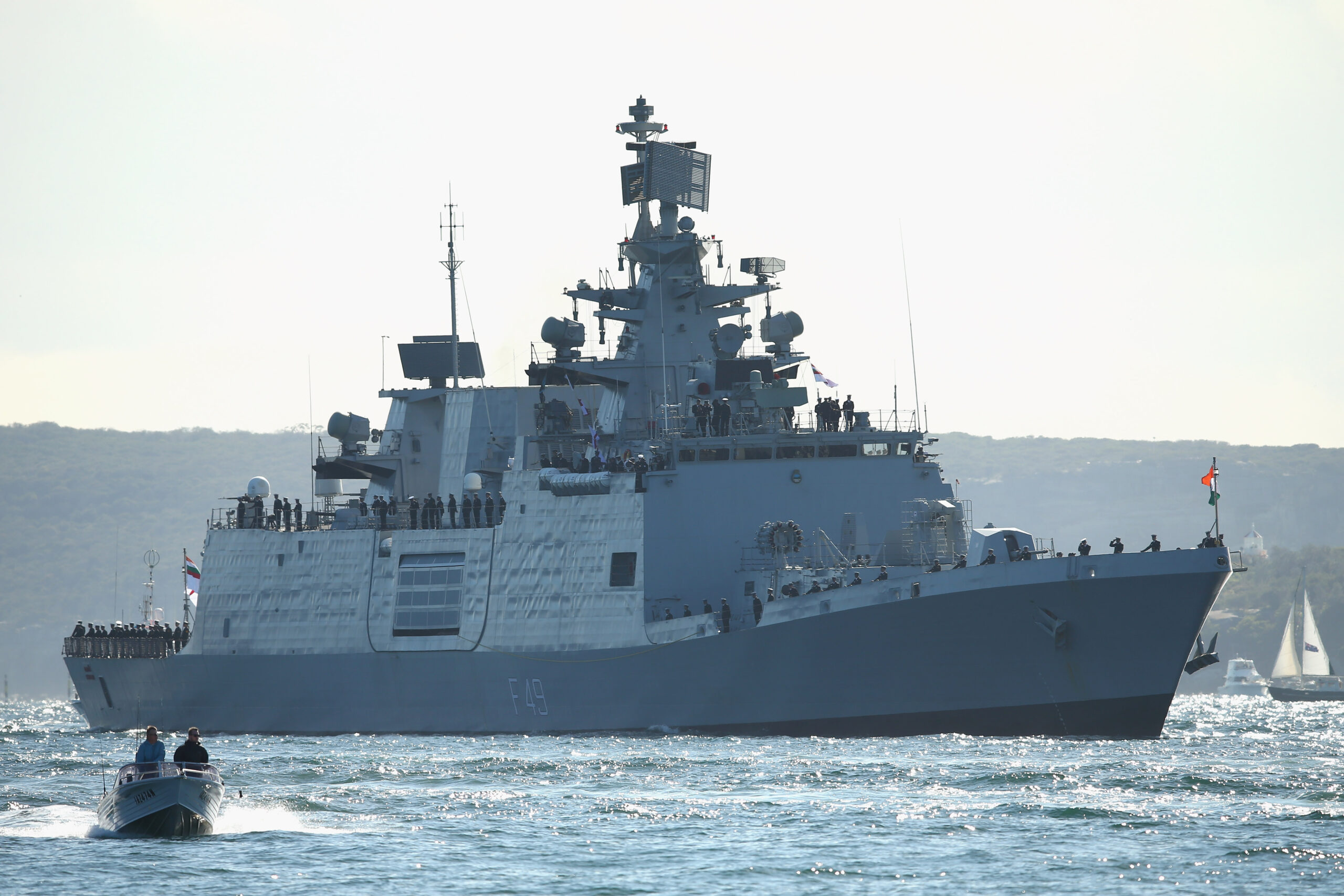 SYDNEY, AUSTRALIA - OCTOBER 04: Indian Navy warship, INS Sahyadri arrives in Sydney Harbour on October 4, 2013 in Sydney, Australia. Over 50 ships will participate in the International Fleet Review at Sydney Harbour to commemorate the 100 year anniversary of the Royal Australian Navy's fleet arriving into Sydney. Prince Harry will take part in the fleet review during his two-day visit to Australia. (Photo by Cameron Spencer/Getty Images)

Kolkata, India — India, the United States, Japan, and Australia started the first phase of Malabar naval exercises on Nov. 2 in the Bay of Bengal to counter China’s presence in the region and to support future military cooperation among the members of the Quadrilateral Coalition.

The four-day exercise takes place at a time when India is locked in an army standoff with China along the Line of Actual Control. Thousands of troops are positioned near the western Himalayas. There are also heightened tensions between the U.S. and China over many issues, including defense and trade and China’s increasing military presence in the East and South China Seas.

Australia’s diplomatic relations with China worsened this year after Australia called for an independent body outside the World Health Organization to conduct a global inquiry into the spread of the coronavirus.  China subsequently imposed new tariffs of up to 80 percent on Australian beef and barley.

For the exercise, the Indian Navy has deployed five ships, including a submarine, alongside the USS John S McCain guided-missile destroyer, Australia’s HMAS Ballarat a long-range frigate with MH-60 helicopter, and Japan’s maritime self-defense ship Onami, a destroyer with SH-60 helicopter.

Madhav Das, professor of international relations at Jawaharlal Nehru University, said that it is important to control the growing influence of China in the area, as the Indo-Pacific region is strategically important for all the democratic nations.

“Australia [which joined the coalition this year] by its size and location becomes an indispensable part of the Indo-Pacific strategy, hence it is crucial to convince them and strategically win over them,” he said. “The center of gravity has moved from the Atlantic region to the Indo-Pacific region.”

Japan has been involved in a dispute with China over the possessions of islands in the East China Sea.

China has accused the U.S. of a Cold War mentality as America urges its allies to counter China’s growing regional influence.

The Indo-Pacific region, a hub of global trade and energy supply, is the strategic focus of the coalition. Two-thirds of the world’s container trade passes through the region.

India Lt. Gen. Gurmeet Singh said the maritime disputes in the region are a result of China’s expansionist efforts, and that there is a challenge for the Chinese when it comes to security.

“They have got a one-China policy which is being propagated throughout the world, and reunification of Taiwan is a pending issue since its independence,” he said. “They have a boundary issue with Japan in the East China Sea. In recent times, after Covid-19, due to the Cold War between the U.S. and China, this area has gone to a bigger prominence.”

“There is a Chinese naval threat in these areas. The most major problem is that China is occupying several islands in this area and is enhancing the EEZ [exclusive economic zone] area in the South China Sea. The entire world aims to have free and inclusive lanes of communication in the ocean and international territories, and China has been interfering in the flow of the maritime trade in this particular area,” Singh told Zenger News.

During the ASEAN summit in June 2019, the 10 members agreed to work together on the region’s economy and security, as well as peace and stability, in the wake of growing tensions between the U.S. and China.

For the war games, the Royal Australian Navy said that the deployment reinforces the commitment and right to exercise freedom of navigation and overflight under international law across the Indo-Pacific region.

The exercises “allow the HMAS Ballarat and broader Navy to hone our warfare and mariner skills and develop our ability to operate and communicate together,” Cmdr. Antony Pisani, said in a statement, “The shared mutual trust both navies have for each other ensure such activities are mutually beneficial, enhancing the readiness and preparedness of the ships that undertake them.”

There will be no contact among the friendly navies in keeping with health protocols due to the Covid-19 pandemic. The exercise is meant to underscore the countries’ commitment to an open, inclusive Indo-Pacific and a rules-based international order.

Cmdr. Ryan T. Easterday of the USS John S. McCain said that the activity reinforces the strong bond with Australia and that training will increase the maritime skills and battle proficiency of the ship’s crew.

Phase 2 of the Malabar Naval exercise will take place in the Arabian Sea around mid-November.

The annual Malabar exercises were initiated between India and the U.S. in 1992. Japan became a permanent member in 2015, and this year Australia joined the coalition.