A complaint has been filed against a Bollywood superstar and the producers of ‘Kaun Banega Crorepati.’ 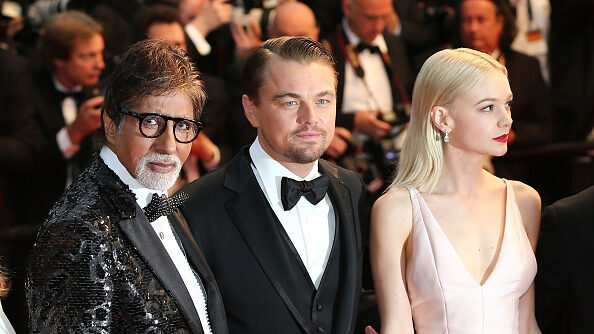 Bollywood actor Amitabh Bachchan, with Leonardo DiCaprio and Carey Mulligan attend the Opening Ceremony and premiere of 'The Great Gatsby' during the 66th Annual Cannes Film Festival at Palais des Festivals on May 15, 2013 in Cannes, France. (Photo by Neilson Barnard/Getty.)

Mumbai, India — A member of Prime Minister Narendra Modi’s Bharatiya Janata Party (BJP) from the western Indian state of Maharashtra is seeking action against Bollywood star Amitabh Bachchan and the producers of the TV show “Kaun Banega Crorepati,” an Indian version of “Who Wants to be a Millionaire,” for allegedly hurting Hindu sentiments.

Bachchan is the host of the game show, currently in its 12th season. It has been airing on Sony Entertainment Television for the past 10 years. The Indian adaptation of the show, which aired in the UK and the U.S., gives away up to INR 7 crore ($10.5 million) if a contestant can correctly answer 16 questions.

Due to the pandemic, the show delayed its premiere this year. This season’s tagline is “Jo bhi ho, har setback ka jawab comeback se do” (Combat any setback with a worthy comeback).”

Abhimanyu Pawar, the BJP legislator from Latur district, about 300 miles from Mumbai, in an official written complaint called a First Information Report, to Latur superintendent of police Nikhil Pingle said action should be taken against Bachchan and Sony Entertainment Television over a question asked during Friday’s ‘Karamveer’ episode.

The special segments, a shift from regularly programmed guests, feature people or organizations who have worked toward the betterment of society.

Season 12 featured social rights activist Bezwada Wilson, the founder of Safai Karmachari Andolan. Wilson has been crusading against rehabilitating manual scavengers, who almost always belong to lower castes. Manual clean involves carrying, disposing of, or handling human excrement in an insanitary latrine or in an open drain or pit.

Wilson was born in 1966 in the Kolar Gold Fields in Karnataka in Southern India. His father and older brother worked as manual scavengers.

“There was an attempt to insult Hindus and create discord between Hindus and Buddhists who have been living in harmony,” Pawar tweeted, posting a copy of his two-page letter to the police official.

The KBC episode had Wilson and actor Anup Soni in the hot seat opposite Bachchan, who asked the following question, worth INR 6.4 lakh ($8,500): “On 25th December 1927, Dr B. R. Ambedkar and his followers burned copies of which scripture?”

The options were: “(A) Vishnu Purana (B) Bhagavad Gita, (C) Rigved and (D) Manusmriti.”

Bachchan then explained, “In 1927, Ambedkar condemned the ancient Hindu text Manusmriti that justifies caste discrimination and untouchability and burned its copies.

“All four options pertained to Hindu religion. It is clear that the motive behind this question was to hurt the sentiments of Hindus,” Pawar said in his police complaint.

“This question spreads the message that Hindu religious scriptures are meant for burning and triggers enmity between Hindus and followers of Buddhism,” wrote Pawar.

The question has prompted an angry public response, including those who accuse the show of running “leftist propaganda.” Others said it hurt Hindu sentiments.

Wilson, who answered the question, doesn’t think it’s a matter of left or right.

“It happened in history, there was a question, and we had to answer it, so we gave the right answer,” he told Zenger News. “My special intervention will amount to nothing. Even the left will say it happened, and it’s history, you cannot refute it.”

Filmmaker Vivek Agnihotri, a member of the board of India’s Central Board of Film Certification and a cultural representative of Indian cinema at the Indian Council for Cultural Relations, is one of the few members of the Indian film industry who has commented on the incident.

Agnihotri, who has publicly voiced his support of the right, tweeted that the show has been “hijacked by Commies” and “Innocent kids, learn this is how culture wars are won. It’s called coding.” In light of the uproar on social media, the hashtag #BoycottKBC has surfaced.

Several other tweets were along these lines: “Hinduphobic propaganda runs deep everywhere if you pay close attention. Look at this question asked in an episode of KBC. Observe their shared laughs while they ponder over the options. Brings them happiness!? If Hindus don’t realize this now, soon it’ll be too late.”

Subodh More, an anti-caste activist in Maharashtra and member of Jati Anta Sangharsh Samiti (JASS), a collective of anti-caste discrimination organizations, says the official written complaint has been filed to cause “unrest and stir up trouble.”

“I feel this the person who filed the FIR has a casteist outlook,” he told Zenger News. “Whatever question was asked, it wasn’t wrong, it’s a fact.”

More said that the Manusmriti is anti-Dalit, against downtrodden castes and anti-women. It was burned by Dec. 25, 1927 by Babasaheb Ambedkar, the Indian scholar, and social reformer, who inspired the Dalit Buddhist movement and campaigned against social discrimination.

The Manusmriti is a sacred theological text, one of the first to be translated from Sanskrit to English, and was used to outline Hindu law by the British Colonial government. Touted to be written during the second century BCE to the third century CE, the text covers duties, rights, laws, conduct and virtues.

“Those who don’t believe in social equality will complain about the question on KBC,” said More. “The FIR should be squashed. It’s anti-constitutional.”

Both Bachchan and Sony Entertainment have remained mum on the subject so far. Attempts seeking a statement from KBC creators and the channel’s representatives have been unanswered. Shortly before the episode aired, Bachchan took to Twitter to address his views on manual scavenging, terming it “unconstitutional and illegal.”

In the past, the actor has closely worked with the BJP-led central government on many social campaigns, including the national cleanliness mission, Swachh Bharat Abhiyan.