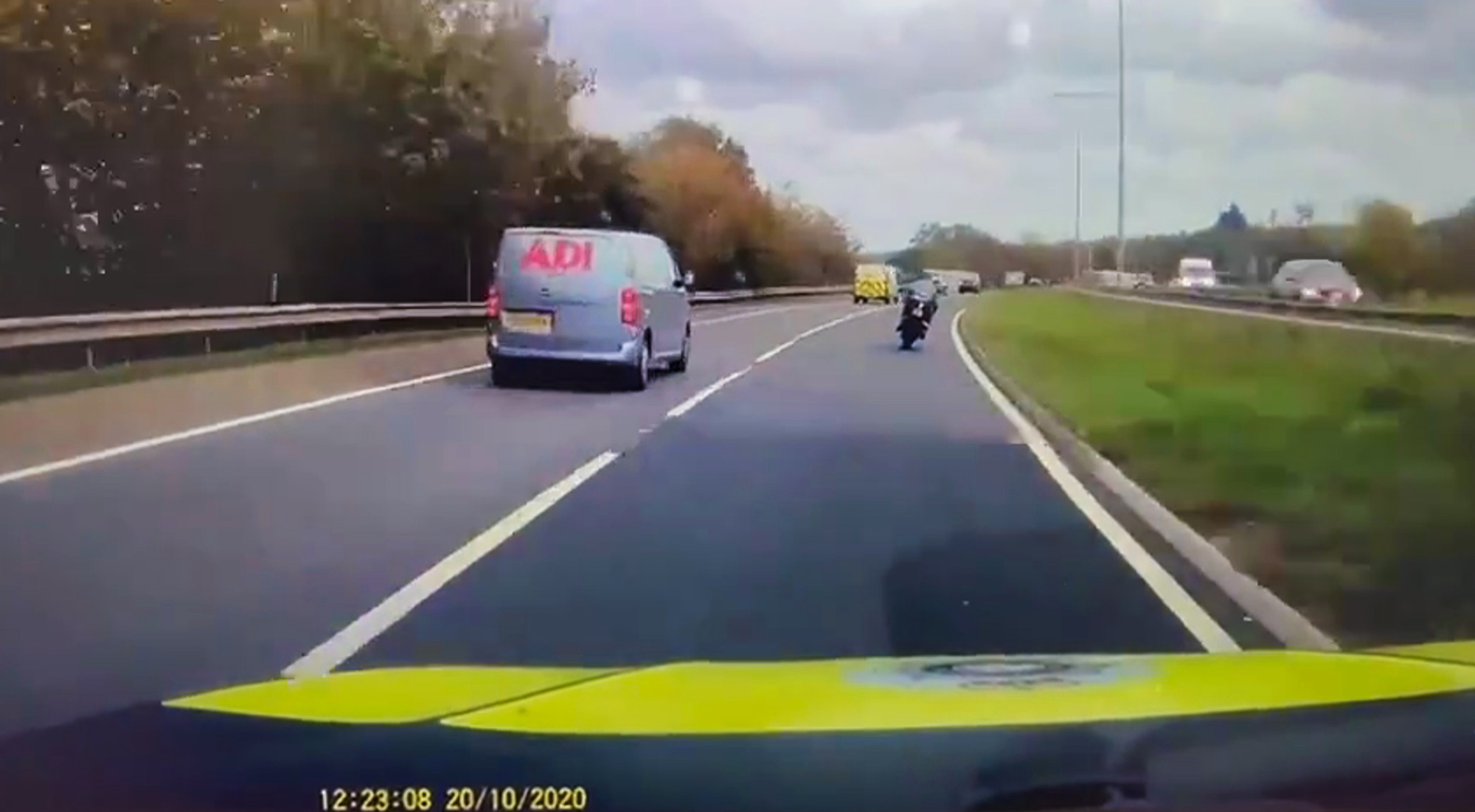 A motorcycle chase by the police patrol vehicle. (@NorthantsARV/Newsflash)

NORTHAMPTONSHIRE, England—A motorcyclist faces a court appearance after being clocked at 120 mph without realizing police officers were in hot pursuit.

Footage shared by the Northamptonshire Police Department on Oct. 20 shows the biker, who appears to be completely oblivious that authorities are following, plowing down a busy highway at speeds higher than 100 mph. Officers eventually pulled the driver over and issued a citation for driving at excessive speed. (The speed racer’s name and age were not immediately available.)

“This motorcyclist failed to spot the big marked ARV (armed response vehicle) directly behind and topped out at 120mph, [and] even with the emergency lights on it didn’t see us,” the police department said while posting the video on social media. “A day in court will follow.”

Speeding drivers have presented a persistent problem for Northamptonshire County, where offenders can be required to take an online driving course, receive a fine of $130 and three penalty points on their license, or appear in court.

Police there reported nearly 7,700 speeding offenses in September, with the fastest driver clocking in at 137 mph. Drivers of cars were the main offenders, and most infractions occurred on roads with 30 mph speed limits. Of those caught speeding, 100 were referred to Magistrates’ Court for serious offenses. The vast majority of infractions were recorded by mobile enforcement cameras installed by the force’s Safer Roads Team.

“It’s always disappointing, despite all the campaigns and warnings about speeding, that so many drivers still choose to drive at excess or inappropriate speeds,” said Matt O’Connell, manager of Safer Roads Operations. “We would urge motorists to think about their actions and drive at a speed suitable for the weather conditions and within the posted limit. We cannot be any clearer — speeding kills.

“It is one of the four biggest causation factors in collisions and driving even just a few miles per hour over the speed limit can have extreme consequences, leaving families devastated by the loss of loved ones.”

Last year, the county recorded its highest number of deaths (42) and serious injuries (347) on its roads in eight years. In response, the force launched a new road safety campaign, Operation Journey, this month.