He has presented himself as both a reformer and a ‘law-and-order’ president. 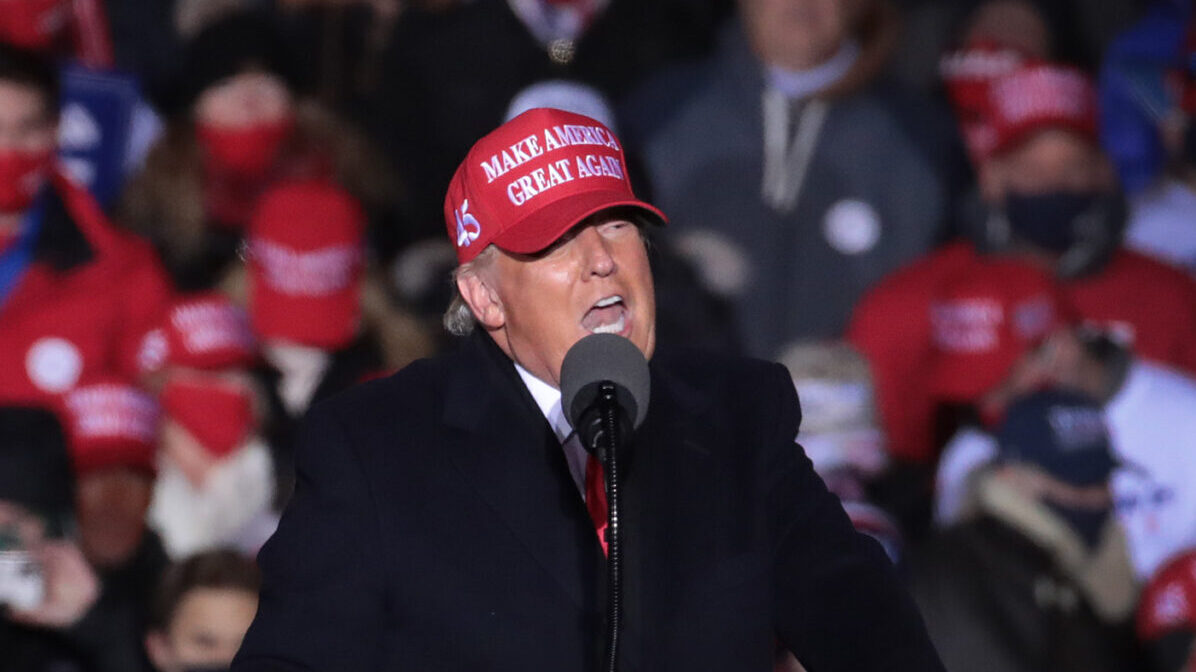 KENOSHA, WISCONSIN - NOVEMBER 02: President Donald Trump speaks to supporters during a campaign rally at the Kenosha Regional Airport on November 02, 2020 in Kenosha, Wisconsin. Trump, who won Wisconsin with less than 1 percent of the vote in 2016, currently trails former vice president and Democratic presidential candidate Joe Biden in the state according to recent polls. (Photo by Scott Olson/Getty Images)

WASHINGTON, DC — President Trump has only partially embraced criminal-justice reform, despite frequently congratulating himself for his efforts.

After signing the First Step Act into law in 2018, he has since declared he got criminal-justice reform “done.”

The law is both Trump’s signature criminal-justice reform effort and the first significant piece of legislation addressing the matter in decades. Passed with bipartisan support, it undid many harsh sentencing policies by providing more federal inmates with paths to early release and lessening punishments for certain crimes. More than 3,100 federal inmates were released within the first year of its enactment.

Besides a follow-up “Ready to Work Initiative,” which aimed to provide former inmates with a second chance at success, and the promise of a Second Step Act, the First Step Act has largely been an outlier in the Trump administration’s criminal-justice reform record. It has also been quietly undermined by his Department of Justice, which has resisted releasing inmates who qualify under the law and has argued against people it makes eligible for sentence reductions in court.

The administration has also underfunded the act’s programs and changed its risk assessment to reduce the number of federal inmates allowed release to mitigate the spread of the coronavirus.

Trump’s other criminal-justice efforts have included making a series of high-profile acts of clemency.

They include commuting the sentence of and later pardoning Alice Johnson, a first-time drug offender who was serving life in prison. His action came after a personal appeal from reality TV star and businesswoman Kim Kardashian West. Trump followed up the move by granting additional acts of clemency to other low-level and nonviolent offenders in February and again earlier this month.

However, the president has also used his presidential powers to pardon or commute the sentences of his allies, which have been more controversial. Among those benefiting from such largesse are:

In addition, the Department of Justice, under Attorney General William Barr, moved to drop the case against former national security advisor Michael Flynn, who pleaded guilty to lying to the FBI about his contacts with the Russian ambassador during the transition to the White House.

In May, nearly 2,000 former Justice Department officials called for Barr to resign after he asked a federal court to reduce the prison sentence its lawyers had recommended. The reversal came after Trump tweeted his displeasure.

“As we said then, ‘governments that use the enormous power of law enforcement to punish their enemies and reward their allies are not constitutional republics; they are autocracies,’” the letter states.

At the same time, Trump has criticized the Obama administration’s approach to pardons and commutations, which led to former President Obama setting a record for reducing inmates’ sentences, by complaining that his predecessor let too many prisoners free.

Despite bragging that without him, “you don’t have criminal-justice reform,” Trump has just as loudly promoted “tough-on-crime” policies that run counter to that first goal.

He first appointed then-Sen. Jeff Sessions (R-Alabama), who has a long history of calling for punitive policies, as attorney general, followed by William Barr, who served in the role under former President George H.W. Bush and published a report titled, The Case for More Incarceration. He has resisted efforts to end the cash bail system, and Trump’s DOJ has reinstated the federal death penalty and began carrying out executions at the national level earlier this year for the first time in nearly two decades.

The president has also encouraged the expansion of the death penalty in drug cases, which Sessions signed off on.

Private prisons have flourished under the Trump administration after Sessions revoked an Obama-era initiative to phase out the reliance on private contractors to run federal prisons in 2017. Such corporations have since been used in Trump’s crackdown on immigration to hold undocumented immigrants in detention centers. By 2018, 65% of detainees being held by the Department of Homeland Security were housed in privately operated facilities.

Those families separated at the U.S.-Mexico border have also been a legal and ethical problem for the administration. A federal judge ordered the government to reunite families separated under its “no tolerance” migration policy, but the parents of 545 children still can’t be found.

Separately, while Trump has said he believes recreational cannabis policies should be left to the states, his administration has threatened marijuana prosecution in states that have legalized the substance. Sessions turned over another Obama-era directive in 2018 that made it easier for prosecutors to enforce federal marijuana laws in states where it is legal. The president has also repeatedly targeted state marijuana protections in federal budget proposals, including his 2021 proposal, which calls for ending a major protection for state medical marijuana programs.

Trump’s DOJ has also sharply curtailed the Obama administration’s hallmark pattern-and-practice probes, which launched a historic number of investigations into instances of local police department misconduct. Although the department is investigating a few recent officer-involved shootings of black Americans, it has been reluctant to pursue broader probes, arguing it is unfair to impose expensive changes to police departments upon local taxpayers.

Instead, the administration has focused on giving police departments money and resources to combat crime and has revamped the Collaborative Reform Initiative, which aims to protect police officers through efforts such as purchasing bulletproof vests. It also reversed an Obama executive order that blocked military gear from being repurposed for local police departments in 2017.

Amid a national focus on systemic racism in policing and police brutality, the president signed an executive order pushing police reform in June. The measure created new guidelines for the use of force and established a national police misconduct database, but it remains unclear how effective the order will be in reforming police practices at the local level.

As protests spread across the nation in response to the death of George Floyd, a black man killed during an arrest by a white officer in May in Minneapolis, Trump vocalized support for police officers and called for “law and order.” He has opposed growing calls to reform the police, and has shot down proposals to end qualified immunity for officers, which severely limits instances in which they can be targeted in civil-rights lawsuits.

Trump responded to the civil unrest that broke out during the Floyd demonstrations by sending federal agents into major cities, often without the local government’s consent, to arrest protesters, some of whom were charged with federal crimes that carry long sentences. In some instances, these agents used irritants, rubber bullets and kettling tactics against protesters.

Peaceful demonstrators in Washington, D.C., were also met with low-flying helicopters using force to dispel them. Some protests involved the vandalism or destruction of statues and monuments that depict figures tied to racism and discrimination, which Trump condemned. He further cracked down on the trend by signing an executive order in June that promoted harsher penalties for those defacing statues.

Trump’s mixed-messaging and his administration’s contradictory actions on criminal-justice reform have presented a challenge as he faces off against former Vice President Joe Biden in the 2020 election.

In campaign-trail attacks on his opponent, the president has presented himself as a “law-and-order” candidate. He has knocked Biden and his running mate Kamala Harris (a former California attorney general) for being “weak” on crime. However, Harris has also been criticized by some progressive reformers as an example of a “tough on crime” era.

Still, Trump has simultaneously painted himself as a reformer, juxtaposing that image with the Violent Crime Control and Law Enforcement Act, commonly known as the 1994 Crime Bill, that Biden sponsored as a senator from Delaware. The law — which imposed tougher prison sentences, escalated the War on Drugs and increased funding for prisons — has been pointed to as a large contributor to the nation’s mass incarceration problem.

The president has largely avoided making clear promises on the future of criminal-justice reform under his administration, should he be reelected. His second-term agenda makes no mention of the issue.