Deising’s Bakery sells cookies with Biden’s or Trump’s face on them, feeding its poll that has consistently picked the winner. 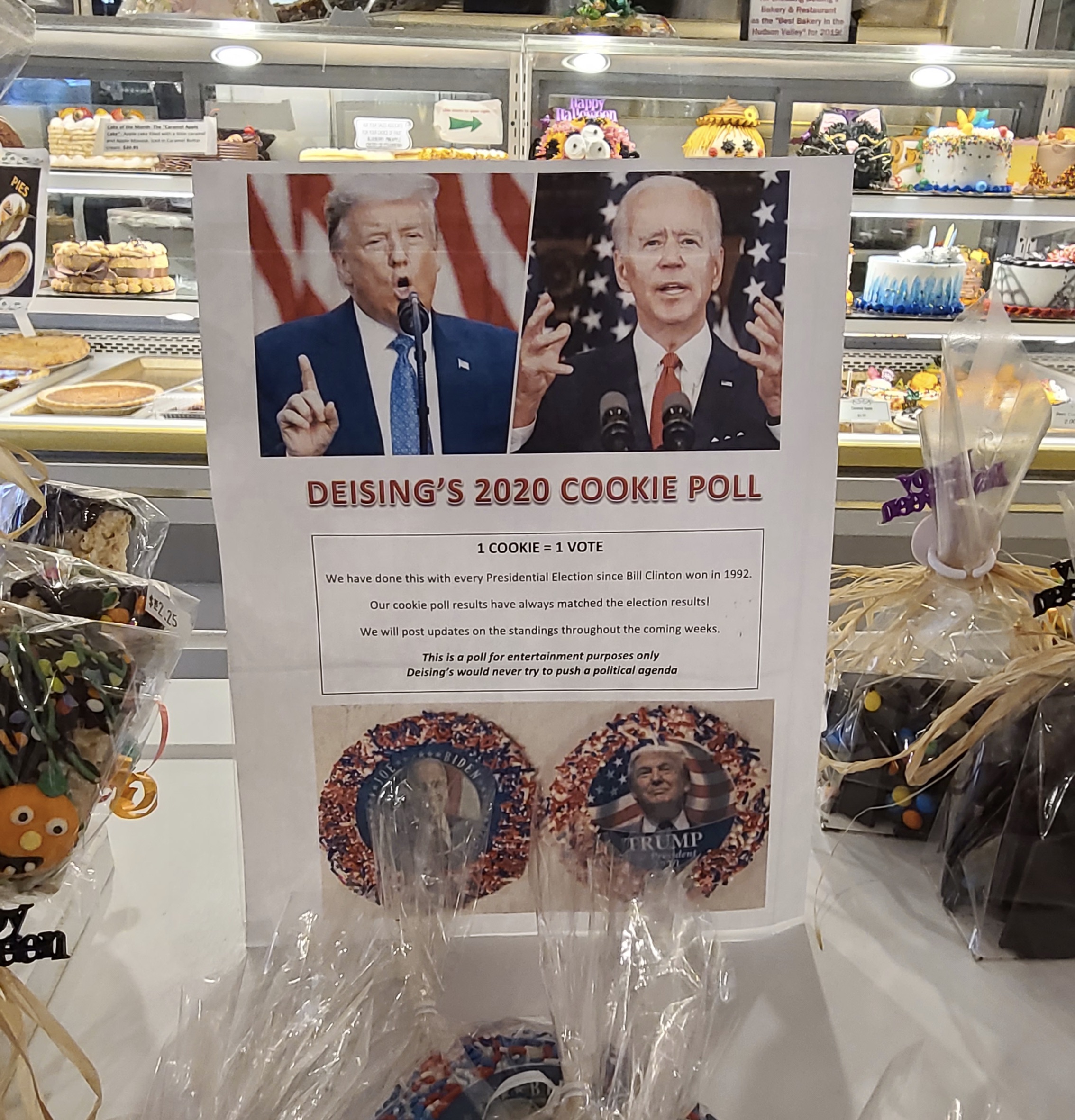 KINGSTON, N.Y. — A bakery in Kingston, New York, has created a sweet take on a salty presidential election with a cookie poll that lets customers “cast votes” by purchasing Joe Biden- or Donald Trump-themed cookies. So far, 992 Trump cookies have been sold since they started the poll on Oct. 1, putting the president at a 72-cookie lead against Biden, whose count stands at 920. The update is current as of the bakery’s Oct. 29 reporting.

The round sugar cookies are decorated with red, white and blue sprinkles and feature either Trump’s or Biden’s face on them. They are priced at $48 a dozen by mail order including shipping, or $2.50 each in-store. Deising’s Bakery keeps track of the count at the register and on Facebook.

Unofficial presidential election polls have been a fun way to predict the election in America for decades. Nickelodeon has a “kid’s choice” poll that targets Americans who won’t officially be able to vote for years — this year, the kids are leaning toward Biden. The poll has been right six out of the last eight elections.

Other businesses, such as Halloween mask manufacturers and sellers, have cast their predictions every four years as well — even predicting Trump in 2016 when many news polls were incorrect.

“The closest cookie poll we’ve had was in 2000, which is coincidentally the closest election we’ve had,” said bakery president Eric Deising.

During the 2016 election, the poll’s numbers rose to 400 cookies for Donald Trump, versus 345 cookies for Hillary Clinton. This year the numbers have more than doubled, with each candidate raking in at least 900 cookies with less than a week left until Election Day.

“We almost didn’t do them this year because we’re concerned about the sensitivity of this election, but it’s been really popular. There has never been an argument in-store, which I was surprised about,” Deising said.

A post on the bakery’s Facebook page highlights the importance of levity during today’s deeply partisan political environment: “This cookie poll is about having fun and being lighthearted! Deising’s has never, and will never endorse a political candidate. Most importantly, this cookie poll helps support our family business and the employees that work here.”

Though the New York bakery’s poll currently has Trump winning, it is unlikely Trump will secure the solidly “blue” state. The last time New York voted Republican was during the 1984 election, choosing Ronald Reagan over Walter Mondale.

Customers may purchase as many cookies for either candidate as they’d like, which leads to some subtle competition in the store.

“If Trump gets too far ahead, someone will come in and buy 55 cookies just to catch Biden up,” Deising said. “It happens the other way around too. We recently had an order from a wholesale customer for 100 of the Trump cookies for a Republican get-together.”

Deising does not have his own prediction of the election outcome, but one thing he knows for sure is that cookie sales will spike closer to Election Day. “Once we get closer, the number will jump up. People buy them for election night parties,” Deising said.

Customers can show support for their preferred candidate by purchasing the cookies up until 5:30 p.m. EST on Election Day Nov. 3, when the shop closes for the day. Whether we’ll know on election night whether any poll’s results were half-baked remains to be seen.