Other than Ayodhya in Uttar Pradesh, other places had little or no celebrations. 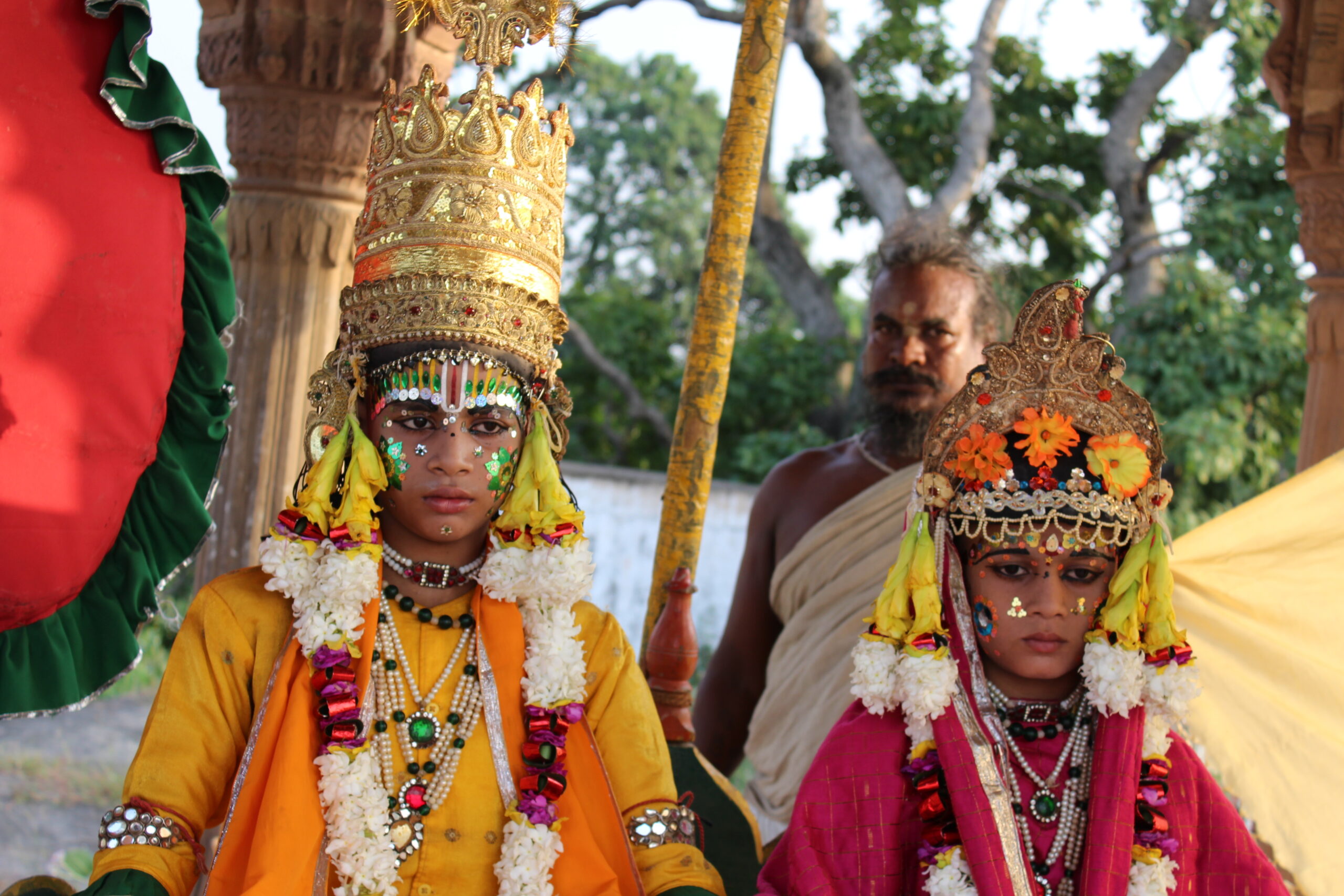 A young boy and girl enact the roles of Lord Ram, and his consort Sita, at the Ramlila at Ramnagar, Varanasi. Courtesy: Dinesh Sethi

“If it were not for the pandemic, the whole town would have been celebrating — singing along and clapping to the beats of the kirtans (hymns) sung in the Ramlila,” said Vijayanand Tewary, a resident of Ramnagar, Varanasi that hosts the world’s oldest Ramlila.

Ramlila is a dramatic folk enactment of the Hindu god-king Ram’s life through songs, narration, recital, and dialogue. It is performed across northern India during Navratri, a nine-day-long Hindu festival, held each year in autumn according to the ritual calendar. The most famous Ramlilas are those of Ayodhya, Ramnagar, Vrindavan, Almora, Satna, and Madhubani.

The Ramlila festivities were declared an “Intangible Cultural Heritage of Humanity” by UNESCO in 2008.

The Ramnagar Ramlila lasts for a month, unlike the others that begin at the onset of Navratri and end with Ravan Dahan—where an effigy of the demon king Ravan is burnt – on Dusshera, 10 days later. Residents of Ramnagar await the Ramlila throughout the year and lakhs of visitors, including foreigners, assemble to witness this grand celebration.

This year, due to the Covid-19 pandemic, Ramnagar did not host the Ramlila to avoid containment of the infection. The huge grounds that served as Ramlila venues lay desolate and there was gloom all around.

Tewary, secretary of Bharat Vikas Parishad, grew up watching tourists from far-off places flocking to Ramnagar in hundreds of thousands to watch the epic Ramlila. “It is the first time that this 200-year-old tradition was broken,” he said.

Fables have it that the king of Varanasi used to travel to Chhota Mirzapur, a village located at around 10 miles from Ramnagar, to watch Ramlila, which used to begin only after he reached the spot. However, the king was upset when, in one instance, the Ramlila began without his presence. Since then, Kashi Naresh, as he was popularly addressed, started “Ramnagar ki Ramlila” on the banks of the sacred Ganges.

The current Kashi Naresh, Anant Narayan Singh, is in charge of the yearly Ramlila at Ramnagar.

“The Ramlila was started by the Maharaja of Kashi in 1806 and has continued since then,” said Hridayanand Pandey, who has been participating in Ramnagar’s Ramlila since he was two.

A businessman by profession, Pandey grew up watching his father and grandfather enacting different roles in the Ramlila. Apart from playing characters, Pandey also directs the Ramlila.

“Participating in Ramlila is a family tradition here. A few families keep playing the roles of Ravan, Hanuman, and Parshuram, year after year. Our family has been playing the role of Vyas Muni, among others. ”

At Ramnagar, various grounds have been designated for each of the life episodes of lord Ram.

“We have different grounds for Ayodhya, Janakpur, Panchvati, Lanka, Kshirsaagar, and several others. Even the actors who play characters do not perform a second role,” he added.

“Every year, the king rides on elephant, horses, or chariots and reaches the venue. Even businessmen from Varanasi participate in such processions. With fairs, lights, food stalls, and music – there is fun and frolic everywhere. But this year, there is none,” said Tiwary.

While Ramnagar’s residents are sorrowful due to the canceled festivities, the temple town of Ayodhya saw a star-studded Ramlila and a celebration grander than ever.

Ayodhya has been a major election card for the ruling BJP since its inception. Prime Minister Narendra Modi presided over the “bhumi poojan” ceremony of the Ram Mandir in Ayodhya on August 5 this year.

Staged at Laxman Qila, on the banks of the river Saryu, Ayodhya’s Ramlila saw Bollywood stars and actors-turned-politicians play the key roles of Ram, Sita, Laxman, Ravan, and Hanuman.

“It was the first time I took part in a Ramlila,” said Dagar. “Working with renowned actors and enacting Ram’s character – that too with such pomp and show – was an experience I had never dreamt of.”

Due to Covid curbs, an assemblage of viewers was not allowed this year but was live-streamed on YouTube and Doordarshan — the public TV broadcaster. Huge LED screens were installed at different places and mobile vans were sent to villages to help people watch the live telecast.

Organizers of Ayodhya’s Ramlila claimed to have clocked a viewership of over 10-crore viewers even before the finale, the — “Ravan Dahan.”

“My mother wanted to watch me perform live on the stage, but that wasn’t possible due to Covid-19. However, my friends and family who were glued to their TV sets and mobile screens, appreciated my performance,” said Dagar.

“Ramlila at Ramnagar still takes place in the traditional style – without microphones, loudspeakers, and halogen lights,” said Tewary when asked why a similar arrangement didn’t take place at Ramnagar’s Ramlila. “The enactment is done in natural lighting using Petromax lights. So, photography or video filming of the plays is difficult. But this is what makes our Ramlila unique.”

Though the local administration in some parts of northern India allowed hosting of Ramlilas, Covid-19-induced restrictions on minimum assemblage and social distancing put a dampener on the festivities.

“Only 25 percent of the usual numbers appeared to watch our Ramlila this year,” said Sunil Mavi, a member of the Indraprastha Ramlila committee in Delhi.

“Due to the low-key celebrations, everything was affected. Food stall vendors didn’t make enough money. Neither did any of the other stalls. The Ramlila artists, therefore, ended up getting less than 70 percent of what they usually make.”

Although the Indraprastha Committee went live on Facebook throughout the nine days of the Ramlila, it failed to fetch many viewers.

Like the Ramnagar and Indraprastha Ramlila, most of the Ramlilas in the country were either canceled or were a minimalist affair. The vendors, artists, carpenters, decorators, equipment providers – every professional community that awaited the event to make a penny or two, now have to wait for a year, or maybe more.