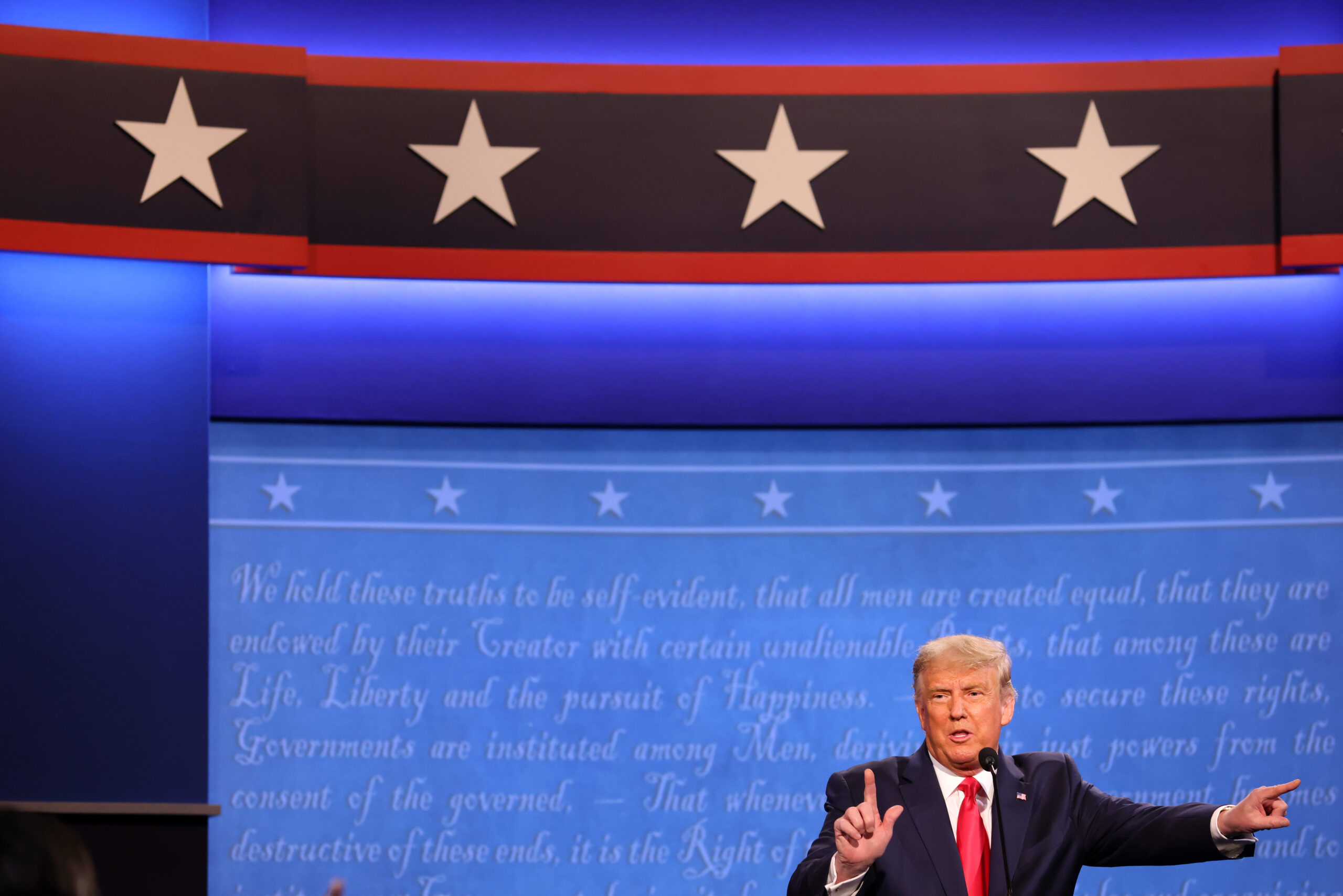 President Donald Trump participates in the final presidential debate against Democratic presidential nominee Joe Biden at Belmont University. The subject of the National Debt was not breached. (Photo by Justin Sullivan/Getty Images)

WASHINGTON — America’s national debt is larger than the economy itself.

A key pledge Donald Trump made in his 2016 campaign was that he would eliminate the entire national debt in eight years. Not deficit—the difference between what the federal government spends and brings in each year—but the debt itself.

“It is hard to believe we now owe a full year’s worth of output,” says Maya MacGuineas, president of the Washington-based Committee for a Responsible Federal Budget. “We weren’t supposed to cross this threshold for over a decade, but here we are. Debt is the size of the economy today, and soon it will be larger than any time in history.”

The federal deficit tripled to a record $3.1 trillion in fiscal year 2020, which ended Sept. 30. As a percentage of the U.S. economy, that’s the highest level—15.2%—since 1945, the last year of World War II, when the government was financing massive defense spending.

The deficit tripled largely because of spending in response to the Covid-19 pandemic, but MacGuineas points out that the U.S. government was gushing red ink long before that crisis hit.

“We can’t blame the pandemic for most of this massive debt load,” she says. “Lawmakers spent the last five years approving unpaid-for tax cuts and spending hikes during the expansion, rather than getting our fiscal house in order, securing our trust funds and prepping for an emergency where borrowing would be justified.”

Treasury Department data supports this view. As 2020 began, the national debt stood at $23.17 trillion, up $3.23 trillion—or 16.2%—from the level President Trump inherited when he was sworn in three years earlier.

Conservative-minded economists shake their heads at how quickly the debt is piling up.

“The pandemic has obviously been a major driver this year,” says Brian Riedl, senior fellow at the right-leaning Manhattan Institute, “but even before that, we were headed for deficits exceeding $1 trillion this year, on our way to $2 trillion in a decade. Even if this year’s pandemic spending spike goes away, we’re still heading for huge deficits.”

Blame for all this spending cuts evenly down partisan lines. “On the left, liberals will say, ‘Tax the rich and cut defense, and we’ll be fine,’” Riedl says. “On the right, you hear people say, ‘Cut welfare, cut foreign aid and we’ll be fine.’ Neither side really comprehends the degree of broad-based, middle-class tax increases, as well as significant reforms to middle-class benefits, that will be required.”

As for Trump’s eliminate-the-debt pledge, it was based on his view that “bad trade deals” were to blame for our indebtedness, not an imbalance between government spending and revenues.

Speaking with The Washington Post’s Bob Woodward in 2016, Trump said, “No, but I’m renegotiating all of our deals, Bob. The big trade deals that we’re doing so badly on. With China, $505 billion this year in trade. We’re losing with everybody.”

Aside from the fact that the trade gap with China was $366 billion when Trump spoke—not $505 billion—the then-candidate did not understand that eliminating a trade deficit does not mean that the money winds up in government coffers. Even if that $366 billion somehow flowed into the Treasury, it would have been just 1.8% of the national debt at the time Trump spoke.

“The idea that anyone could eliminate the entire national debt in a few years, while also promising tax cuts and without touching Social Security and Medicare, which Trump also promised, was so mathematically illiterate as to be absurd,” Riedl says. “It was just throwing out incoherent promises and numbers that were so outlandish as to be almost disqualifying.”

And things have gotten far worse since.