Khadi, a home-spun natural fiber textile, is being woven by 400 families in a village called Oaxaca in Mexico. 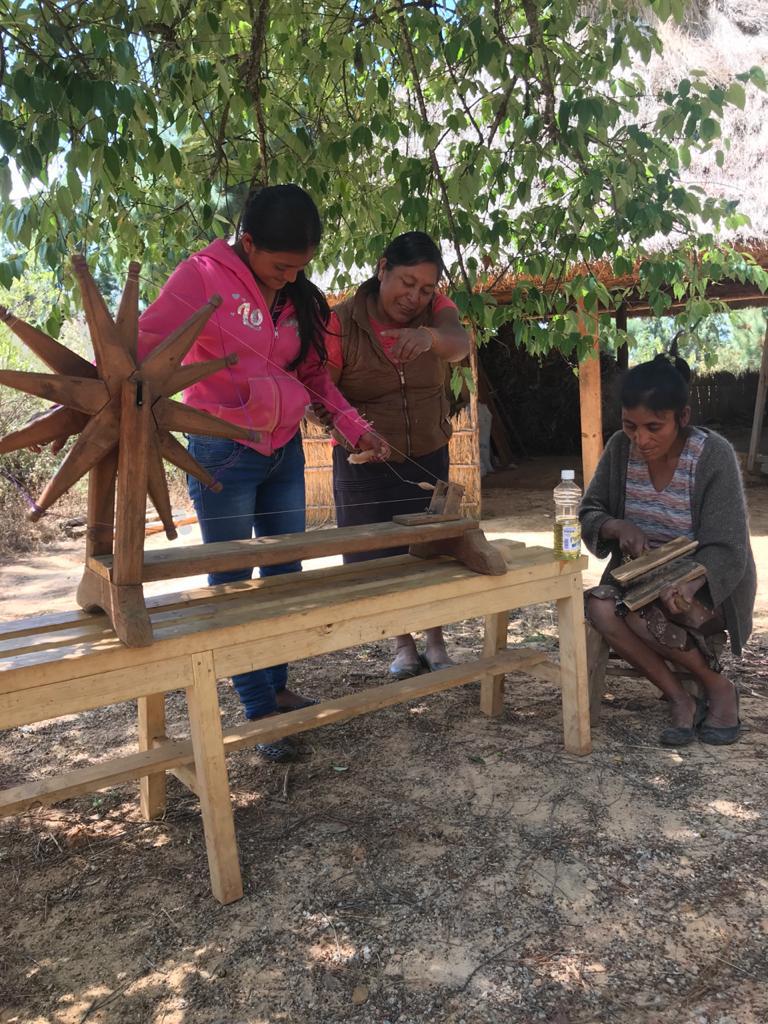 For Indians,  Khadi is not just another textile; it is synonymous with India’s freedom struggle. During India’s fight for independence from the British, Mahatma Gandhi urged his countrymen to boycott foreign goods and use Khadi, a hand-spun, natural fiber fabric, to promote self-reliance.

Interestingly, Khadi has now found a home in Mexico, far from the land where it originated. In a village called Oaxaca, 400 families are involved in the process of making Khadi. And they are keeping the environment-friendly essence of the fabric alive by using natural fertilizers for the cotton plant, and natural, plant-based dyes for the cloth. Marigold flowers are used to color the fabric yellow and the bark of oak trees from the Sierra Sur forests is used to obtain a brown color.

The village came into focus when Indian Prime Minister Narendra Modi spoke about it in his monthly radio show — Man Ki Baat. He spoke about how the appeal of Khadi had transcended borders and asked Indians to buy local products such as Khadi, this festive season.

Khadi came to Oaxaca when Mark Brown, the man behind Khadi Oaxaca, visited India in the 1980s to stay in Gujarat, on the western coast. He stayed at the Gandhi Ashram and learnt about Gandhi and Khadi.

In the 1990s, years after he got back to Mexico, Brown brought a spinning wheel to Oaxaca to teach his family how to use the wheel.

“Almost 50 percent of the villagers already knew how to spin, so when I brought this wheel, it wasn’t difficult for them to pick it up,” said Brown. Slowly, more and more families in the village took to weaving Khadi.

This venture has made the village self-sufficient. The cotton used for Khadi is grown in Oaxaca. Local carpenters make the spinning wheel and the villagers are the weavers. While Khadi is providing a livelihood to the people of Oaxaca, Brown said he considers this venture more of a social service than a business.

Khadi Oaxaca has a wide range of products from fabric, apparel to household products. It also accepts donations apart from selling its products within Mexico.

Khadi Oaxaca, however, does not want to restrict itself to Mexico. “We see a market in France and many other countries, which we would like to tap.”

A staunch follower of Mahatma Gandhi, Brown feels that it is necessary to be the change. “The clothing industry is one of the most polluting industries. It is time for a change and Khadi is environment-friendly,” says Brown.

“I consider the spinning wheel to be the wheel of ‘Dharma’ (the right way of living).”

Meanwhile in India, the government is trying to give this fabric a push. Recently, the minister for medium and small enterprises (MSMEs), Nitin Gadkari, urged retail giant Walmart to make Khadi a part of its supply chain. This ministry has also been engaging with various embassies to conduct exhibitions on Khadi.

Khadi comes under the MSME ministry.

Government estimates say that there are close to 500,000 Khadi weavers in India.

Arun Panda, former secretary in the ministry of MSME, says that for Khadi to regain its glory, it needs to be repackaged.

“Khadi has to be marketed as modern and stylish by the Indian government and global giants. Fashion designers should also be involved in this,” says Panda.

“The artisans will fetch a good price if it appeals to the modern generations. Khadi has to be made contemporary or artisans will leave the profession for alternative jobs. Weavers are finding it difficult to sustain themselves.”

Panda adds that if Khadi becomes a style-statement, people will not hesitate to pay a higher price just the way people do for organic food. “These weavers deserve higher prices as the product is hand-woven.”

The government has also been planning to shoot videos on Khadi to market it internationally. KVIC has held exhibitions and fashion shows in 60 countries.

The Central Board of Secondary Education (CBSE) which is responsible for school education in the country, had issued a circular asking schools to celebrate “Khadi Wearing Day” at regular intervals.

The Khadi commission is not only looking for new opportunities for weavers, but also fighting fake Khadi markets.

“As far as protecting the interest of Khadi artisans is concerned, the Khadi commission has come down heavily on prominent e-commerce sites selling fake Khadi products and misusing the brand name. Legal notices have been served to 1000 such firms”, says Vinai Saxena, Chairman of KVIC.