US Offers Sri Lanka a Different Vision, Accuses China of Being a Predator

The strategically positioned island nation is courted by both superpowers. 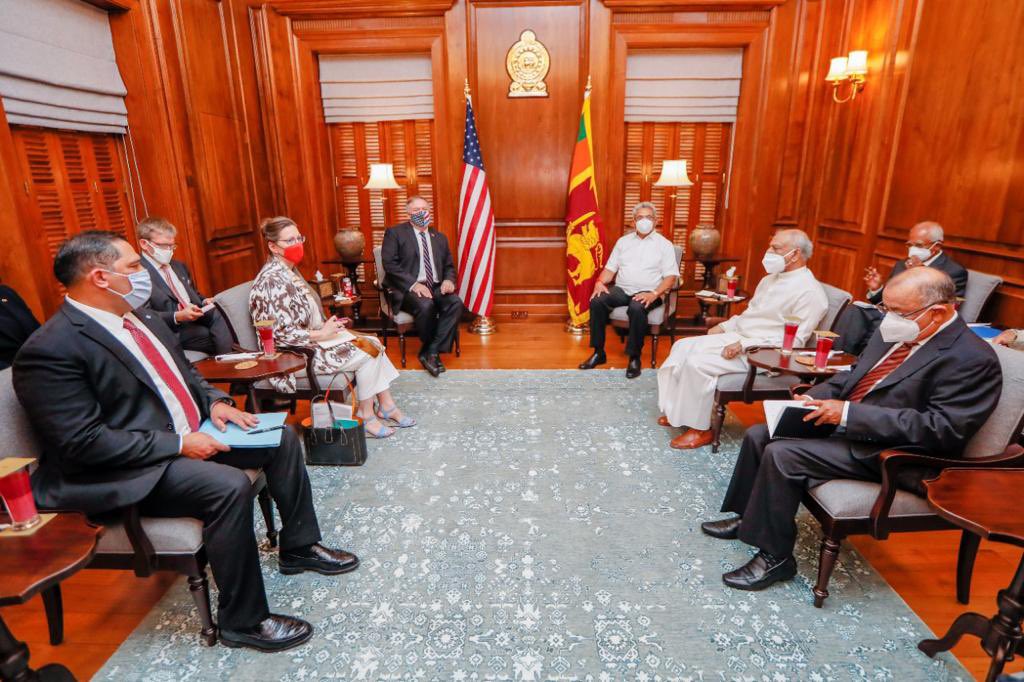 Colombo — Calling the Chinese Communist Party a predator, U.S. Secretary of State Mike Pompeo said during bilateral talks in Colombo that America offers a different vision for Sri Lanka and its democratic values.

By “bad deals” he was referring to the Hambantota Port deal with China. The port was handed over to China on a 99-year lease after Sri Lanka defaulted on the debt it incurred on a loan from China to build it. The U.S also considers the construction of the Colombo Port City a bad deal.

Pompeo said a strong and sovereign Sri Lanka will be a powerful strategic partner for the U.S. on the world stage and can be the beacon for a free and open Indo-Pacific region. He did not elaborate on details of any plans for U.S. investments in the country, nor did he address the stalled $480 million Millennium Challenge Corporation grant.

When asked during a press conference if he was in Sri Lanka to discuss the MCC and the Status of Forces Agreements with the U.S., Pompeo said, “My visit today was to figure out good ways to build and develop our relationship so the American private sector companies can see the opportunity and invest in Sri Lanka.”

Human rights reconciliation, which many anticipated would be on the agenda, did not come up  — at least publicly.  In advance of Pompeo’s visit, Amnesty International had sent the secretary a letter about human rights violations and war crimes in the country.

Pompeo assured  President Gotabaya Rajapaksa that the U.S. would not bring any investment that would exclude Sri Lankans from working. He also said the U.S. will not offer loans that Sri Lanka will not be able to repay or extort them in any way.

Pompeo’s visit comes at a time of heightened geopolitical tensions in the region, particularly regarding China’s expansionist policies. During his trip to South Asia, Pompeo visited New Delhi on Oct. 26 and 27, and after stopping in Sri Lanka, went on to the Maldives.

In response to Pompeo’s remarks, the Chinese Embassy in Sri Lanka tweeted: “Sorry, Mr. Secretary Pompeo, we’re busy promoting China-Sri Lanka friendship and cooperation. We are not interested in your alien versus predator game invitation. The U.S. can play two roles at the same time as always.”

In a statement just ahead of Pompeo’s visit, the embassy said: “We are firmly opposed to the United States taking the opportunity of the State Secretary’s visit to interfere in China-Sri Lanka relations, and to coerce and bully Sri Lanka.”

Various political parties in Sri Lanka expressed resentment ahead of Pompeo’s visit. The opposition People’s Liberation Front held protests in front of the U.S. Embassy in Colombo on Oct. 26, accusing the U.S. of trying to interfere in the country’s internal affairs.

There were no such protests when Yang Jiechi, a top Chinese delegate, arrived in Colombo last month.

Political analysts suggest Sri Lanka is caught in the middle of regional tensions in the Indian Ocean region between China and Sri Lanka.

“The statements issued by the U.S. and Chinese embassies in Colombo indicate a Cold War is going on between the two countries. The statements have crossed diplomatic decencies and have entered a zone of mutual accusation,” said N. Nillanthan, a Sri Lankan political analyst.

As both China and the U.S have raised concerns over Sri Lanka’s sovereignty, analysts question whether “Sri Lanka was really sovereign or not.”

“In the post-Covid-19 period, where there seems to be a growing cold war, it is an unusual situation for two superpowers of the world fighting to maintain relationships with a small country like Sri Lanka,” Nillanthan said.

Owing to its geographical position in the Indian Ocean region, Sri Lanka has become a vital cog in the foreign policies of both China and the U.S. with respect to the Indian Ocean region. While China’s Belt and Road initiative will be bolstered if Sri Lanka agrees to more cooperation, the U.S. is eyeing a more strategic relationship with the country to better position itself in the region.

“Sri Lanka is important to both the Belt and Road Initiative by China and in the Indo-Pacific region. It is easier to influence the southern parts of India if Sri Lanka is acquired first. The cold war mentality of the two superpowers deems the island nation important for its strategic importance,” Nillanthan said.

“Sri Lanka is a neutral, non-aligned nation. It will build relationships with the U.S. and other countries,” Gunawardena told Pompeo.

Some analysts see it differently.

“Sri Lanka has aligned with China post the civil war that ended in 2009 and that was obvious. The statements issued by the foreign ministry of Sri Lanka of not being aligned is far from being true. China has obtained the Hambantota port and has changed the map of Sri Lanka by constructing the port city,” Nillanthan said.

China has extended its cultural influence, which includes the opening of Chinese schools and teaching Mandarin in the countries it has invested in such as Pakistan. As attempts at Chinese cultural integration in the island nation mushroom in form of names written in Mandarin on billboards, employment of Chinese workers, and availability of Chinese cuisine, Sri Lankan political analysts have some concerns about the country’s identity.

“The traditional identities of Buddhism in Sri Lanka have been replaced with modern ones such as the lotus. The Chinese influence in the country has increased to an extent that even billboards on the island have Mandarin in them. Sri Lanka hasn’t seen this much Chinese influence in its modern and traditional Sri Lanka. It has become Chinese-centered and is contradicting the traditions of Sri Lanka,” Nillanthan said.

Sri Lanka finds itself in the position of being caught between the crossroads of two superpowers who are pitted against each other and are eyeing a bigger share in the region and the global economy.

“The truth is, Sri Lanka is stuck between the predator and the double-faced superpower,” said Nillanthan.

Pompeo’s visit was the first by a top U.S. official since that of former Secretary of State John Kerry in 2015.