Ankhi Das’s exit comes amid row over data privacy violations and how political content is handled in India. 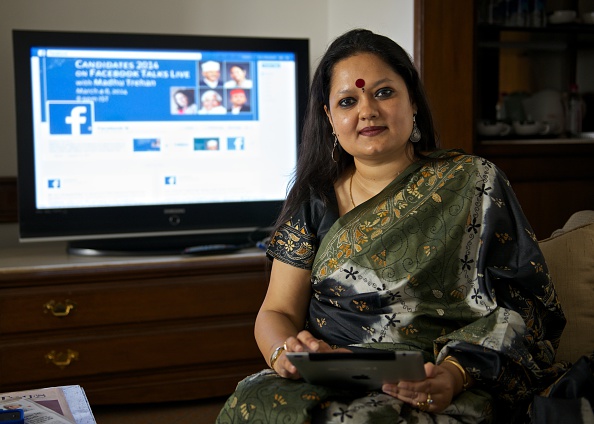 Ankhi Das, former public policy director, Facebook India and South and Central Asia, during an interview at her office on March 3, 2014 in New Delhi, India. (Photo by Priyanka Parashar/Getty Images.)

Weeks after finding herself amid a hate speech controversy that drew widespread criticism from the opposition in government, Ankhi Das, Facebook’s public policy director for India, South and Central Asia, quit on Oct 27.

Shivnath Thukral, who was India’s public policy director at WhatsApp, is her interim replacement, according to media reports. Thukral, a former journalist, worked for Das at Facebook for two years until March 2020. Thukral also worked with Prime Minister Narendra Modi’s Bharatiya Janata Party (BJP) during the campaign for the 2014 elections to the Lok Sabha, the lower house of parliament.

“Ankhi has decided to step down from her role in Facebook to pursue her interest in public service,” Ajit Mohan, managing director of Facebook India, said in a media statement. “Ankhi was one of our earliest employees in India and played an instrumental role in the growth of the company and its services over the last nine years. She has been a part of my leadership team over the last two years, a role in which she has made enormous contributions. We are grateful for her service and wish her the very best for the future.”

Das was in the eye of the political storm that raged across the Indian media and opposition after the Wall Street Journal and TIME magazine published reports in August on Facebook’s favoritism toward India’s ruling party. She was named as the person who allegedly provided the BJP “favorable treatment on election-related issues.”

In conflict with Facebook’s pledge to remain neutral in elections around the world, Das shared an anti-Muslim post on her Facebook page and celebrated Prime Minister Narendra Modi’s victory in the 2014 elections.

The news articles published in August sparked a fierce row between the BJP and the opposition Congress party in the months that followed, resulting in both parties moving privilege motions against each other.

Facebook executives found themselves in a spot with repeated summons in an investigation by the parliament.

Mohan was questioned by the parliamentary standing committee on information technology chaired by Congress member of parliament Shashi Tharoor on Sept. 2, Das was summoned to appear before another parliamentary panel regarding concerns over data privacy on Oct. 23.

The social media giant was also summoned by the Peace and Harmony committee of the Delhi Assembly but did not appear.

As per media reports, Indian politician T. Raja Singh, in his Facebook posts and public appearances, had said Rohingya Muslim immigrants should be shot, called Muslims “traitors’” and threatened to raze mosques. Singh is a BJP member in the Telangana assembly and is known for making provocative statements.

Until the report by the Wall Street Journal on Aug 14, no actions were taken by Facebook India to take down Singh’s posts or ban his social media handles under the purview of Facebook.

The Journal had also stated that the company had taken it easy on the ruling party and three other “Hindu nationalist individuals and groups” to avoid damaging the social media platform’s business prospects in its biggest market.

Even as Facebook took down the posts of Singh and another BJP member known for controversial remarks about Islam, Anand Hegde, the next day, the controversy intensified within a few hours of the Journal’s publication. Constituents of the left and right wings hurled allegations at each other on social media.

Rahul Gandhi lashed out at the BJP and Facebook India on his Twitter post: “BJP & RSS [feed] control Facebook & Whatsapp in India. They spread fake news and hatred through it and use it to influence the electorate. Finally, the American media has come out with the truth about Facebook.”

On Aug. 16, Ankhi Das filed a complaint with the Delhi Police Cybercrime cell accusing journalist Awesh Tiwari and four others of issuing “violent threats against my life and body through online posting/publishing of content,” according to media reports.

Asked about the allegations, Tiwari said, “I had only translated the Wall Street Journal report to Hindi and posted it on my wall so that the message could reach a broader audience.”

Based in Chhattisgarh’s capital of Raipur, Tiwari is a freelance journalist with 25 years of experience and the former state head at Swaraj Express, a Hindi news channel.

“I had earlier shared a few posts critiquing Facebook for its biased content regulation policies, and this time it was only the post on the WSJ report. I don’t know Ankhi Das personally, nor have I ever interacted with her. I kept getting repeated murder threats over the phone and was pressured to delete the post. This is an utter violation of my freedom of expression.”

On Aug. 17, Tiwari filed a first information report (FIR) with the Chhattisgarh Police against Das, Ram Sahu, a resident of Mungeli, Chhattisgarh, and Vivek Sinha, for threatening him.

In a copy of the FIR reviewed by Zenger News, Tiwari stated that he was harassed and threatened by multiple people following his Facebook post and requested a case registration on the charges of obstruction of communal harmony, defamation, and criminal intimidation, among others.

Concerns about violation of the election’s model code of conduct have been high amid residents of Bihar casting their votes in the state Assembly elections that are underway through Nov 7.

Asked about protocols carried out by Facebook to regulate election-related content, the company said, “We are committed to maintaining elections integrity and there is a cross-functional team spread across multiple geographies working to secure the Bihar elections.”

“The policy prohibits election-related and voter fraud — things that are objectively verifiable like a misrepresentation of dates and methods for voting (e.g., text to vote). Amid Covid-19, we’re also focused on preventing new forms of potential voter suppression. We have now started to remove explicit claims that you will contract COVID-19 if you vote,” Facebook states.

“Das is only one of the hundred puppets that the ruling party uses to manipulate the countrymen. Her exit alone doesn’t solve the deep-rooted problem,” Tiwari said. “Both businesses and political parties keep using such tactics to stay in power. The fight against these forces must not stop.”