The inability to finance coal-based plants is forcing the switch. 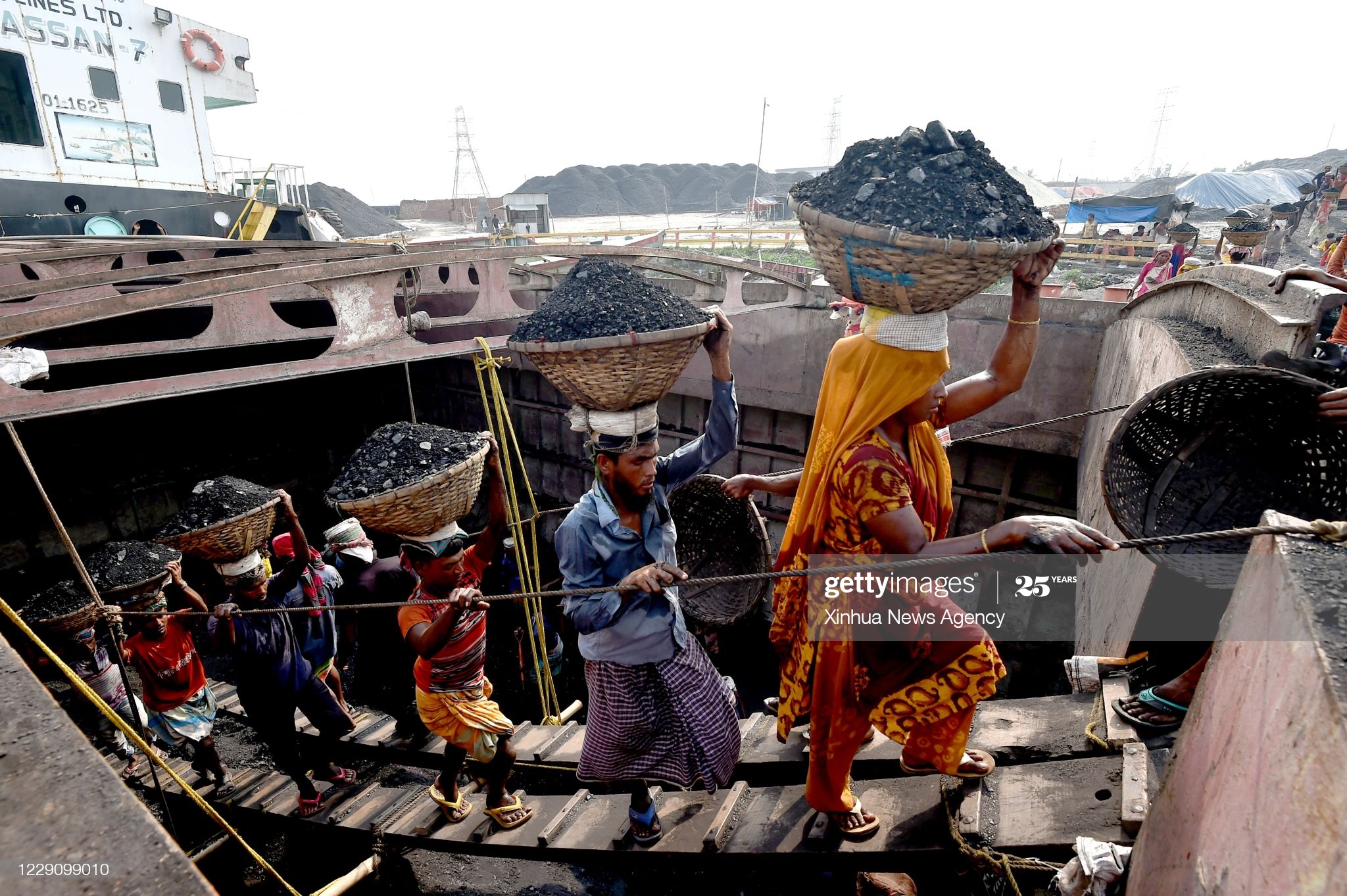 Laborers unload coal from a cargo ship in baskets on their heads at a river bank in Dhaka, Bangladesh on Oct. 15, 2020. (Photo by Xinhua/Getty Images.)

Kolkata, India — Bangladesh is planning to shift from coal-based power plants to those operating on liquefied natural gas due to the high cost of new power plants and the country’s peculiar topographic characteristics.

As power demand in the country soars, authorities plan to review their construction options to reduce dependence on coal.

The country has or has plans for 26 coal-based power plants, of which two are functional, six are undergoing construction and the remainder have yet to be built. Authorities plan to review all of them.

“We are planning to continue with the three coal-based power plants among those which are under construction. Currently, we are aiming for 40- 41 gigawatts of generation capacity. Of this, only 5 gigawatts are coal-based,” Nasrul Hamid, Bangladesh’s minister of power, energy and mineral resources, said during a webinar conducted by the Centre of Policy Dialogue in July.

The Ministry of Power, Energy and Mineral Resources has asked Prime Minister Sheikh Hasina to approve the conversion of 13 coal-fired power plants, which have not yet been built, to liquefied natural gas-based plants.

Coal planning in Bangladesh started in 2010 under the Power System Master Plan, which states that 50 percent of the country’s power production will come from coal by 2041. However, the scenario changed in 2016 when Hasina banned extraction of coal.

“When the government started to implement the coal projects, they found the large coal vessels could not come to our shores because they have deltaic long slopes. Therefore, coal project infrastructure became a major barrier,” said M. Tamim, professor of Petroleum Engineering at Bangladesh University of Engineering and Technology. With a deltaic slope, the slope of the water channel becomes lower and less stable.

Tamim said the low cost of electricity production was another reason for the preference of coal over other alternatives in 2010 when the plan was developed.

A joint study by Transparency International Bangladesh and Bangladesh Poribesh Andolon in 2019 pegged the country to have one of the largest coal power pipelines in the world with a combined capacity of 33.2 gigawatts. If all the proposed projects are built, the country’s coal power capacity would increase 63-fold.

It also pointed out that Bangladesh will have to heavily rely on foreign economic assistance for the proposed projects.

“It would cost Bangladesh an estimated $2 billion annually to import large volumes of coal to power the proposed coal plants. Unless the exports increase significantly, this would add billions to a negative balance of trade, and lock in Bangladesh to costly coal imports for decades,” the study noted.

This inability to finance coal-based plants is thus driving the country to switch to liquefied natural gas.

“The most important reason is economic. Coal, which was once considered cheaper than other energy-mixes, is no longer alone the cheap source,” said Khondaker Golam Moazzem, research director at the Centre of Policy Dialogue.

“The amount of land required for establishing these plants in a densely populated country like Bangladesh is the second major constraint. Also, the global financing for coal-based power plants has become difficult,” he said. “Power generation through alternate energy-mixes offer better options to the government, and a number of financing countries have changed their domestic policies to pursue clean energy.”

Moazzem said Bangladesh is one of the signatories of the Paris Agreement, which mandates reducing the temperature by 2050 through reduction of greenhouse gas emissions.

Bangladesh is also chair of the Climate Vulnerable Forum and is committed to work toward combating the vulnerabilities of the climate-affected countries and pursuing clean-energy initiatives.

Under the Paris Agreement, approximately 200 countries agreed to reduce their emissions to limit global temperature increase in this century to 2 degrees Celsius above preindustrial levels,

“We have a power capacity of around 21,000 megawatts against our maximum demand of 13,000 megawatts. The reserved margin for this year is more than 40 percent,” said Mohammad Hossain, director-general of Power Cell, Bangladesh. “The domestic natural gas is decreasing very rapidly in our country. So, the utilization of the gas-based power plants are at times hampered because of the shortage of the gas.”

Estimates predict the generation of 36,018 megawatts worth of electricity by 2025, when the country’s demand is projected to be 24,952 megawatts. This would translate into an excess of 11,066 megawatts or 30.7 percent.

Hossain said Bangladesh has already started importing liquefied natural gas for power plants, and that liquefied petroleum gas is being considered as a substitute for transportation and household uses such as cooking.

“Liquefied natural gas is now blended with our domestic gas. The upcoming gas-based plants will consist of them. The fuel mix is done considering the availability, sustainability and cost,” he said.

While Bangladesh’s power division states that 94 percent of the country’s population has electricity, some households are still without power. The national grid covers only about 80 percent of the population, and the rest depend on solar-based power.

According to the country’s Sustainable and Renewable Energy Development Authority, Bangladesh currently generates 649 megawatts of electricity through solar, wind, hydropower and biomass.

China is the largest investor in the country’s power sector, followed by India and Japan.