The agency claimed it had “credible information” on some NGOs and trusts collecting funds to carry out secessionist activities. 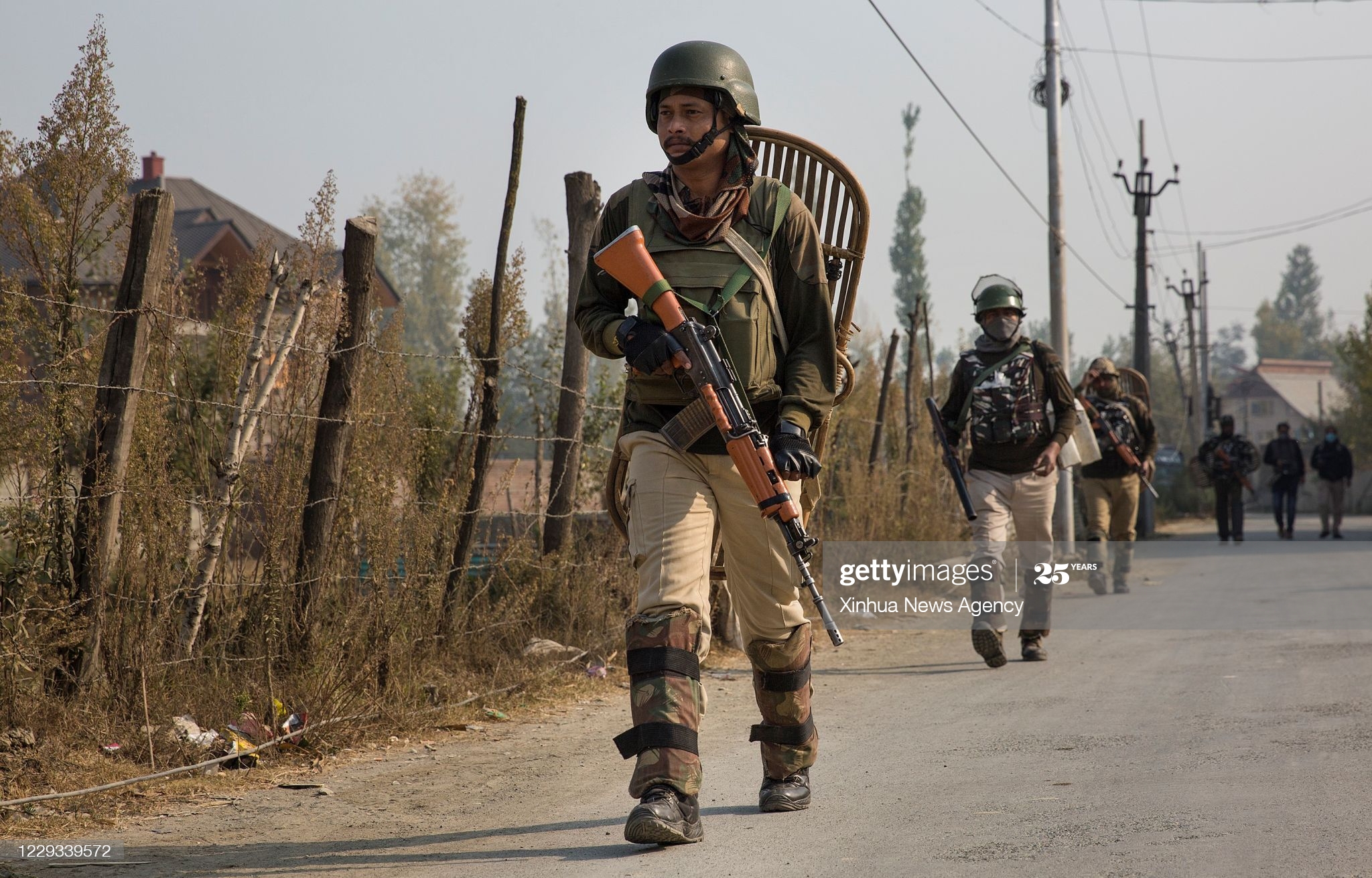 Indian paramilitary troopers move back to their base camp after a gunfight at village Mouchwa of Budgam district about 29 km south of Srinagar city, the summer capital of Indian-controlled Kashmir, Oct. 28, 2020. (Courtesy: Javed Dar/Getty Images.)

During an investigation into potential funding of secessionist activities, India’s counterterror task force on Oct. 28 and 29 raided several nongovernmental organizations, trusts, and the home of one journalist.

The National Investigation Agency (NIA) said the searches were carried out after it registered a case on Oct. 8 on “receiving credible information on certain NGOs and trusts collecting funds domestically and abroad through so-called donations and business contributions etc., and then utilizing them for secessionist and terrorist activities in J&K (the union territory of Jammu and Kashmir).”  The directive to register the case came from the Ministry of Home Affairs.

The head of one NGO said she got a call Wednesday morning from someone at his office telling her that a raid was underway.

“The NIA continued with its raid for seven hours even though I denied the allegations of terror funding,” Parveena Ahanger, chairperson of the Association of Parents of Disappeared Persons (APDPK), said in a press statement issued after the Oct. 28 raid.

“APDP has not received any funds from foreign organizations,” Ahangar said in the press statement. She said her organization had received grants from the UN Voluntary Fund from 2009 to 2019 for victims of torture, the accounts of which were sent to the UN each year.

The NIA also raided the offices of NGO Athrout, which aids underserved communities, and GK Trust, which runs the English daily Greater Kashmir.

Zafarul-Islam Khan, the former chief of the Delhi Minorities Commission and founder of Milli Gazette newspaper, said his house was raided by the NIA on Oct. 29.

The raids come at a time when the Indian government has introduced sweeping changes to the domicile and land laws in Kashmir following the repeal last year of the region’s special status under Article 370 of India’s Constitution amid widespread local opposition.

Home Minister Amit Shah told parliament in 2019 that Article 370 was the root of terrorism in Jammu and Kashmir, and that it needed to be repealed in order to integrate Kashmir into the mainstream of India. The Indian government blames Pakistan for supporting terrorism, including groups active in Kashmir, a region claimed by both India and Pakistan.

Local political leaders fear the new land and domicile laws have opened up the newly formed union territory to outsiders, leaving the Kashmiris in a vulnerable situation

The individuals and organizations that were the subjects of the recent raids include Khurram Parvez, a human rights activist and coordinator of the J&K Coalition of Civil Society, his associates news agency AFP journalist Parvaiz Ahmad Bukhari, Parvez Ahmad Matta, and Bengaluru-based associate Swati Sheshadri.

The political leaders of Kashmir voiced their objections.

“The NIA raids on human rights activist Khurram Parvez and the Greater Kashmir office in Srinagar is yet another example of the Indian government’s vicious crackdown on the freedom of expression and dissent,” said Mehbooba Mufti, the last chief minister of Jammu and Kashmir as a state. “Sadly, the NIA has become the Bharatiya Janata Party’s pet agency to intimidate and browbeat those who refuse to fall in line.”

The Bharatiya Janata Party (BJP) is the ruling party in India.

The Kashmir Editors Guild expressed its concerns over the raids on the offices of Greater Kashmir. The guild said it was worried about the mounting costs of being a journalist in the region and how the Kashmiri media has been “targeted, demonized, vilified and raided by both the state and non-state actors for a long time now.”

While the counterterror agency said the raid was not on the newspaper but the trust operating it, the management of the newspaper said: “The investigating agency checked their (Greater Kashmir) computers and even took away the hard drives.”

Last year the newspaper’s editor-in-chief was questioned by the agency in connection with another terror funding case.

Mufti also accused the ruling party of targeting journalists who do not write in their favor.

“At a time when J&K’s land and resources are being plundered, the Indian government wants media publications to write op-eds about diabetes and yoga. In BJP’s ‘all is well’ charade, truth is the biggest casualty. Any journalist unwilling to become a part is targeted,” she tweeted.

Mufti is vice president of the newly formed People’s Alliance for Gupkar Declaration, a group of seven political parties that have pledged to fight to restore Kashmir’s special status.

Mufti’s People’s Democratic Party was the first Kashmiri political party to have formed a coalition with the BJP in the former state after the Assembly elections in 2014. Five years later, she was among the first political leaders to be arrested or detained hours before the Indian government repealed Article 370.   She was released this month from detention after 14 months and since then has been at the forefront of opposition to the Indian government’s moves in the valley.

The troubled history of the Indian-administered union territory has been marked by violence and disappearance of thousands of people.

“The [Indian Army] military operations in Kashmir were marked by the excessive and disproportionate use of force. Since 1990, more than 70,000 people have been killed and more than 8,000 have been subjected to enforced disappearances, several thousands have been arrested and detained under repressive laws,” a 2019 report by the International Federation for Human Rights states.

In an earlier incident, human rights activist Parvez was stopped by immigration officials at Delhi’s international airport on Sept. 14 from traveling to Geneva for the UN Human Rights Council. Two days later, he was arrested in Srinagar. Parvez was in jail for 76 days and was released only after the Jammu and Kashmir High Court declared his detention illegal.

Ahanger’s organization, founded in 1994, is a collective of relatives of the victims of enforced and involuntary disappearances in Kashmir. In 2019, she was named on the BBC’s list of 100 inspiring and influential women from around the world.