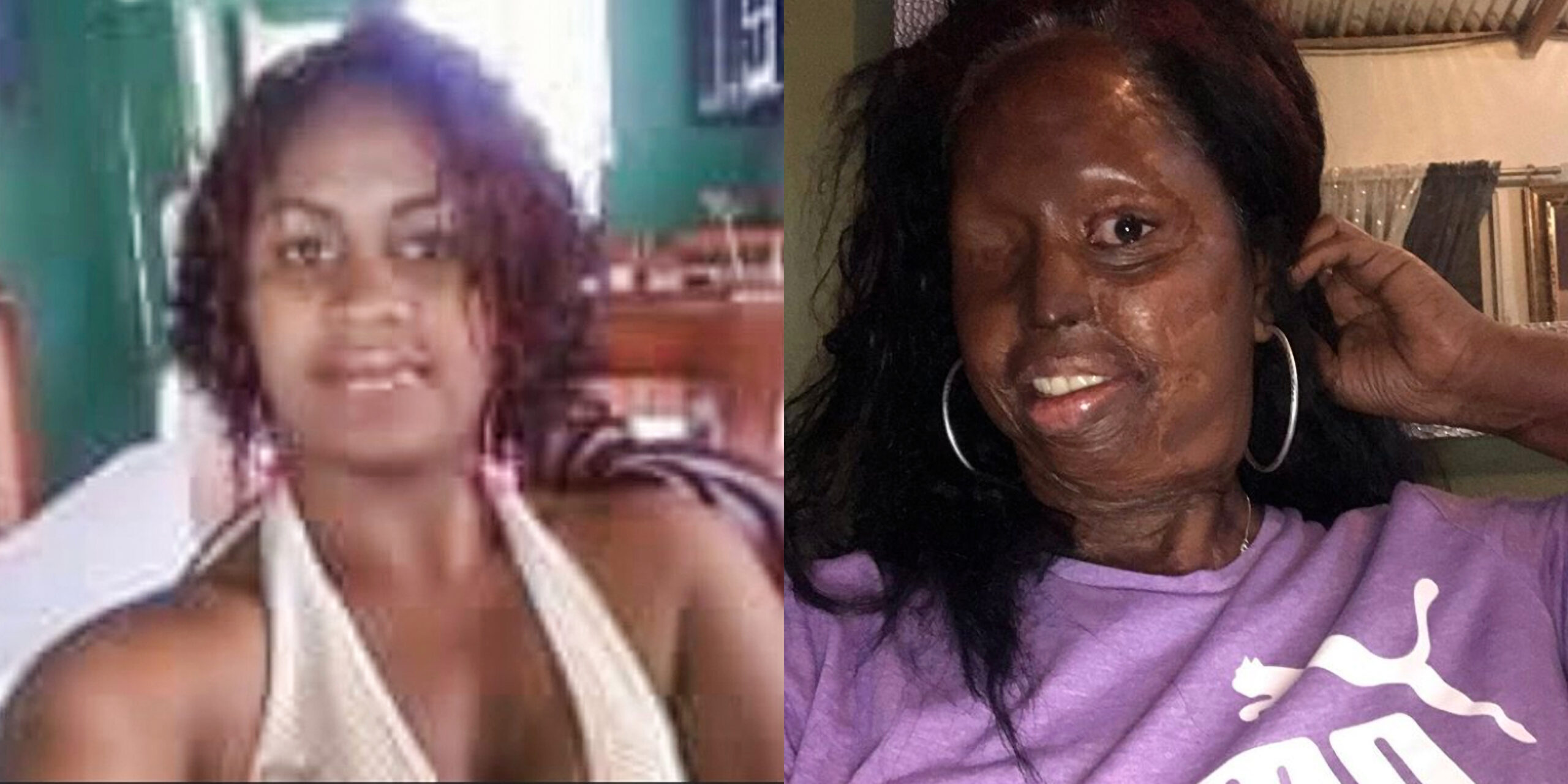 Esther Jimenez, the victim of an acid attack nine years ago, is stepping forward to break the seal of silence victims endure (RealPress)

BONAO, Dominican Republic—A woman whose face was disfigured in an acid attack nine years ago has launched a campaign to lift the stigma surrounding the phenomenon and push for tougher punishments in the Dominican Republic and elsewhere.

Unfortunately, she has plenty of company.

Acid attacks against women are almost an everyday occurrence in the Caribbean country, where 14% of all patients treated at the Luis Eduardo Aybar Hospital‘s burn unit are victims of acid attacks.

Worldwide, some 1,500 women die or are left brutally disfigured from acid attacks every year, according to the British NGO Acid Survivors Trust International.

Esther Jimenez is one of these women. In 2011, Jimenez — who lives in Bonao  — was attacked by a man in her workplace, who threw an acid concoction known as “devil acid” in her face. Since then, she has undergone 27 painful surgeries to reconstruct her face.

But rather than hide, Jimenez is stepping forward to break the seal of silence victims endure and to promote longer jail sentences for attackers.

She still feels like a beautiful woman, despite the severe damages to her face, Jimenez told Zenger News in an exclusive interview.

“A guy came to the cafe and threw a  liquid at her that it was later discovered was a so-called “devil acid,” which is a mix of sulfuric, chlorhydric and muriatic acids.

She was aided by bystanders, who poured water on her wounds to ease the pain and took her to a nearby hospital. From there, she was transferred to the burn unit of the Aybar hospital in Santo Domingo.

“I thought I was never going to make it,” she said.

To this day, Jimenez doesn’t know why she was attacked. She believes it was arranged by a jealous person. The attacker got away, and no one was ever punished for the cruel attack.

The latest such attack to spark international attention happened on Sept. 25, when 19-year-old Yocaira Amarante Rodriguez was attacked by two men on a motorbike on her way home from work. The moment the two men threw acid on her, burning 40% of her body surface and likely causing her to go blind, was caught by a security camera.

The footage caused international outrage and prompted U.S. rap star Cardi B (whose father is of Dominican descent) to offer a $10,000 reward for the capture of the attackers. Three men were subsequently arrested for the assault, among them Rodriguez’s ex-boyfriend, who allegedly orchestrated it.

But this is the exception rather than the rule. Even when attackers are caught, their punishment is much too lenient compared to the price paid by their victims, Jimenez said.

Currently, acid attacks are punished by up to five years in jail in the Dominican Republic.

“They take a person’s life as she knew it. They cause a very painful death of the person that used to be,” she said.

After the attack on Rodriguez made headlines, the Monsenor Nouel public prosecutor’s office also decided to reopen Jimenez’s case.

The years since being attacked have been harrowing for Jimenez. Her nose drooped, she lost sight in one eye, which had to be removed, and she underwent a number of surgeries to transplant skin from different parts of her body to her face and neck.

“When my mum saw me like this, she told me that she could not bear it because I was her little daughter. She died because of it, it was a painful moment for me. I lost a lot of things. I lost my alleged friends and also my boyfriend at that time,” Jimenez said.

One of the things that sustained her during this period was prayer. Another important support was her sister. During the years of treatment, Jimenez’ sister moved into her house to help her and her three children.

“The youngest one, at that time he was 5, he told me I wasn’t his mum. It took him a long time, but after slowly learning that I was still the same caring person behind my wounds, he finally accepted me.”

She talks about her experience on her Instagram account, which currently has more than 70,000 followers, encouraging women to overcome  adverse situations.

Jimenez runs a small secondhand shop and spends the rest of her time as a single-mother raising her now four children: Crisleidy, 18, Brailin, 16, Darwin, 12, and Darlin, 4.

“I am delighted with my little shop. Running a business makes me fell useful as a woman. I have a job and something to do,” she said.

In addition, Jimenez is very active on social media, where she regularly posts pictures of herself, something rarely done by acid attack victims.

She has become something of a role model for Dominican women and receives lots of messages of support, often thanking her for sharing her story and breaking  the taboo.

Acid-based violence against women is not confined to a certain region, religion and culture. It is a global phenomenon, according to Acid Trust Survivors International.

However, as many as 90% of all incidents occur in developing countries, and an estimated 60% go unreported, often because acid attacks for the victims  lead to economic and social ostracizing. In South America, Colombia and the Dominican Republic are known for this type of violence.

Jimenez, however, refuses give up. She has not changed as a person since the attack, she insists.

“Before I had the acid thrown on me, I felt beautiful,”- she said. “And even like this, burned, I look in the mirror, I look at this little eye that I cannot close properly, and still I say ‘look at the beautiful eye. I feel beautiful anyway.’”

“I am the same person. It does not matter what a woman goes through; everything depends on what you decide to feel like,” she said.

It has become her personal goal to spread this message to other women, especially women who have suffered similar injuries.

“I want them to feel as beautiful as I do. There are people with much fewer challenges than I have endured who still wish to die. I want to help those women and motivate them to keep on living and love themselves.”