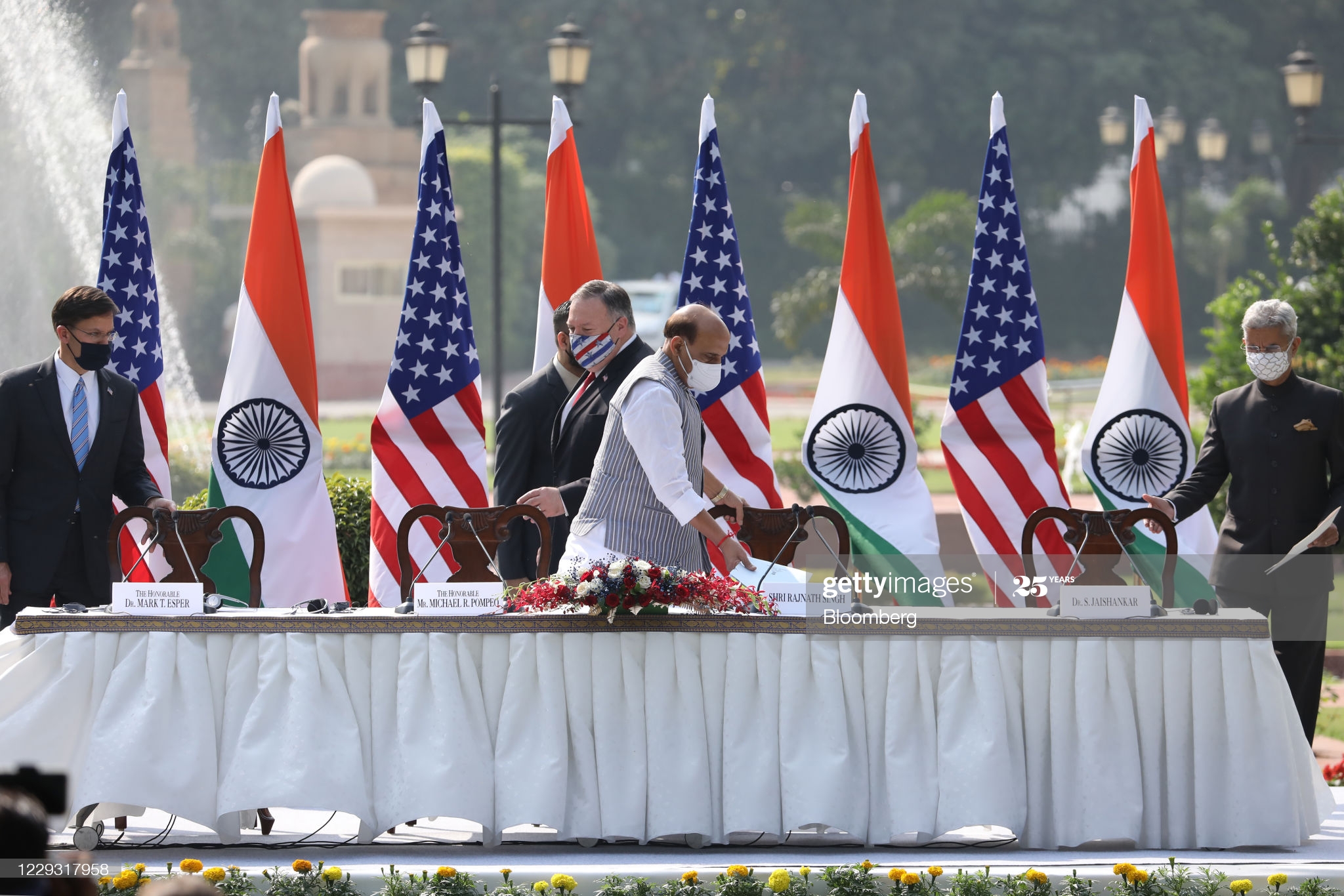 U.S. Secretary of State Mike Pompeo reaffirmed his country’s support in safeguarding India’s sovereignty and liberty amid a rising Chinese threat in the region as both countries signed an important satellite data sharing agreement on Oct. 27 in New Delhi.

“Our leaders and citizens see with increasing clarity the Chinese Communist Party is no friend to democracy, the rule of law, transparency, the freedom of navigation, the foundation of a free, open and prosperous Indo-Pacific,” Pompeo said as he criticized the expansionist policies of China and warned of an imminent Chinese threat.

“Big things are happening as our democracies align to better protect the citizens of our two countries and indeed, of the free world,” Pompeo said.

The U.S. National Geospatial-Intelligence Agency and India’s Ministry of Defence signed the Basic Exchange and Cooperation Agreement (BECA) on geospatial cooperation during the meeting. The agreement pertains to the sharing of geospatial intelligence information on maps and satellite images for defense purposes.

“Our military-to-military cooperation with the U.S. is going well, and we have identified projects for the joint development of defense equipment,” the Indian defense minister said.

Since 2002, India and the U.S. have signed three foundational agreements, including the General Security of Military Information Agreement, the Logistics Exchange Memorandum of Agreement, and the Communications Compatibility and Security Agreement.

The third edition of the 2+2 dialogue comes amid the backdrop of the Indo-China military standoff in India’s union territory of Ladakh and the U.S. presidential election on Nov. 3, with Donald Trump seeking a second term.

“We visited the National War Memorial to honor the brave men and women of the Indian armed forces who sacrificed their lives, including the 20 killed by the PLA in Galwan valley,” Pompeo said, referring to the violent hand-to-hand combat between the Chinese People’s Liberation Army and the Indian Army in mid-June. About 20 Indian soldiers, including a colonel, were killed.

Washington’s ties with Beijing have deteriorated over a range of issues, including the Covid-19 pandemic, internment camps for the Muslim minority Uighurs in China’s Xinjiang province, sweeping changes to the laws in Hong Kong that further concentrate China’s power in the Special Administrative Region, and the country’s aggression in the South China Sea.

Pompeo has been at the forefront of the U.S. attacks on China’s policies and has been vocal about the Indo-China border standoff.

“Pompeo’s attacks and allegations against China are nothing new,” Wang Wenbin, China’s foreign ministry spokesman, said after Pompeo’s remarks. “We urge him to discard the Cold War zero-sum mentality, stop hyping up the so-called ‘China threat’ and the misguided efforts to sow discord between the regional countries, and undermine regional peace and stability.”

Before this visit, Pompeo and Jaishankar met on Oct. 6 at the Quad meeting in Tokyo, which also included the foreign ministers of Australia and Japan.

“The 2020 ministerial was the first standalone meeting of the Quad — the previous minister-level and working-level meetings have taken place on the sidelines of other summits. The readouts of the four countries noted the importance of regularizing the ministerial, as well as continuing working-level and subject experts’ meetings,”  the Brookings Institution, a U.S. think tank, stated in an online report.

On Oct. 19, India’s Defence Ministry announced the participation of the Royal Australian Navy in the Malabar series of naval exercises, which also includes the U.S. and Japan.

China has been wary of the Quad alliance, which it considers as an alliance to contain its influence in the region. The meeting in Tokyo drew sharp criticism from China. Foreign Minister Wang Yi called it an “Indo-Pacific NATO.”

While China was not mentioned directly in Jaishankar and Singh’s remarks, nor in a joint statement by the U.S. and India, Jaishankar said that the Indo-Pacific region was a focal point of the talks.

“We reiterated the importance of peace, stability and prosperity for all countries in this region,” Jaishankar said. “This is possible only by upholding the international order, ensuring the freedom of navigation in the international seas, promoting open connectivity and respecting the territorial integrity and sovereignty of all states.”

In addition to the diplomatic deliberations, Esper said the U.S. looked forward to “advancing sales for key defense platforms, including fighter aircraft and unmanned aerial systems.”

The U.S. continues to be a top defense supplier to India, with deals totaling over $20 billion. In 2016, the U.S. designated India a major defense partner.

Reports suggest that India could be closing in on a deal to buy 30 MQ-9B Guardian drones from the U.S. worth $3 billion. Boeing, the American aerospace equipment manufacturer, is also looking to sell 57 of its F/A-18 Super Hornet to the Indian Navy.

India’s defense minister said only that “there are negotiations when we have to buy or sell weapons. Buying of weapons would depend on these negotiations.”

India has other Boeing aircraft, including the C-17 Globemaster IIIs, P-8Is, AH-64E Apaches, and CH-47 Chinook helicopters, in its arsenal.

“We aspire to go beyond the buyer-seller approach in our partnership with the U.S. in defense and related industry,” India’s defense minister told Pompeo and Esper, as he pushed for more American investments in the defense sector.