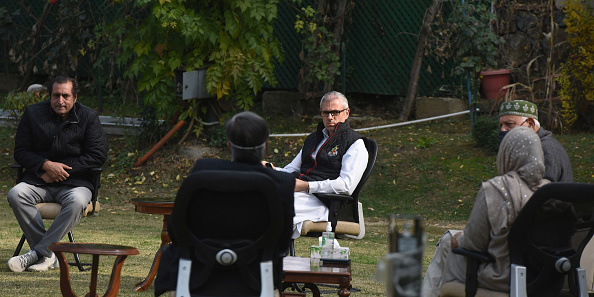 The major political parties of Kashmir, India’s northernmost union territory, have formed a grand alliance to fight for the restoration of Article 370 of India’s Constitution, granting the region special status with limited autonomy.

The People’s Alliance for Gupkar Declaration was formed on Oct. 15 after leaders of seven political parties met in Srinagar following the release of the last chief minister of Jammu and Kashmir, Mehbooba Mufti, from detention on Oct. 13. The alliance includes the long-standing National Conference (NC), an opposition party, and the People’s Democratic Party (PDP), which till last year had been in a coalition with India’s governing party, the Bharatiya Janata Party. Mufti, the PDP’s leader, was detained for more than a year ahead of the central government’s repeal of Article 370 on Aug. 5, 2019.

The NC’s Farooq Abdullah, who was chief minister of Jammu and Kashmir from 1999-2002, was elected chairman of the alliance, and Mufti was elected vice-chairperson on Oct. 24.

“We demand the rights of the people of Jammu and Kashmir should be given to them,” said Abdullah. “That is what we are fighting for.”

Since the alliance formed, a war of words has ensued between members of India’s governing Bharatiya Janata Party (BJP) and Kashmiri leaders, many of whom spent months in detention since the repeal of Article 370.

“When this flag comes in our hand, we will also raise that (Indian) flag,” said Mufti, pointing towards the flag of the former state of Jammu and Kashmir, in her first meeting with the media after her release. She also said she is not interested in contesting polls.

Backlash against her comments were quick to come. Law and Justice Minister Ravi Shankar Prasad said Mufti’s remarks amounted to a denunciation of the sanctity of the national flag.

Mufti, who was in a coalition with the BJP during her time as chief minister of the state, was just one of the political leaders arrested or detained hours before government’s move to repeal Article 370. In a related move, the state of Jammu and Kashmir was divided into two entities:  the Union Territory of Jammu and Kashmir and the Union Territory of Ladakh.  The Indian government then enforced a communication blackout, which lasted several months and crippled the region.

Article 370, which was included in the Indian Constitution on Oct. 17, 1949, had granted the region the power to have a separate constitution, to legislate on certain matters, and to have its own flag.

Arguing for the article’s repeal in 2019, Home Minister Amit Shah told parliament that Article 370 was the root of terrorism in the state. The Indian government blames Pakistan for supporting terrorism, including groups active in Kashmir, which is claimed by both India and Pakistan.

Though Shah said the removal of the special status was necessary to integrate the region with the rest of the country, he had promised the restoration of statehood.

The new, grand alliance has also been the target of criticism from the BJP, with one of its leaders calling it anti-national.

“Gupkar 2 is just a facade. Every Kashmiri knows the special status is not going to return and they are being taken for a ride by the Gupkaris. But a good gain for the Modi government is that 2019 has replaced 1953 [when India’s prime minister was dismissed and imprisoned for allegedly supporting the independence of Kashmir]. Welcome to realpolitik,” BJP leader Ram Madhav tweeted.

Other leaders of India’s ruling party have also disparaged the alliance.

“We don’t even know what this Gupkar alliance stands for,” said Mmhonlumo Kikon, the BJP’s spokesperson. “It seems to be an exercise in haste by certain leaders in Kashmir to revive their lost credibility. It is a sort of political compulsion.”

The alliance, for its part, holds the ruling party responsible for the crisis of credibility in Kashmir’s mainstream politics.

“The mainstream political parties, with their agenda and assessment, differed and disagreed with those who argued for secession,” said Mohammad Yusuf Tarigami, a member of the Communist Party who convened the alliance. “The Indian government has demolished the constitutional relationship of Jammu and Kashmir with India. This has created a huge crisis for mainstream politics. It is not a question of individual leaders, but of creating a vacuum in mainstream politics.”

Tarigami said that political leaders from the region are being falsely accused of a mistake committed by the Indian government and that is why the alliance leaders came together.

Some political analysts in India concur with Tarigami and see the alliance as a welcome step.

“It is a fight for political survival. It’s a kind of an existential battle they are fighting,” said Navneeta Chadha Behera, a professor of political science at the University of Delhi. “It is a positive development for the local and regional political parties to use democratic means to fight for their beliefs. It is good they are not walking away from the battle.”

She also pointed to the mounting issue of China’s presence in the region, in light of the Indo-China military standoff since May, which could impact how the Indian government handles the situation in Kashmir.

Members of other political parties suggested that the BJP change its approach in dealing with the people of Kashmir, who have a deep-rooted resentment against the government.

“They should talk to people and have a working relationship with them. At this time, they have no working relationship. The Indian government wants to work in a vacuum, which is a wrong attitude,” said Saifuddin Soz, a senior leader of the opposition Congress party.

“There is no instrument available to the Kashmiris. Until you have a better instrument in hand, they should work with the alliance,” he said.

Last week, the Indian government approved an amendment to the law that would pave the way for the establishment of district development councils in the region. The councils will sit atop the three-tier local governance structure and its members will be directly elected by voters in the region.

Information and Broadcasting Minister Prakash Javadekar said these polls will be held soon. Though the alliance has not yet announced a decision on contesting the polls, Tarigami said the stakeholders were not consulted before the changes went into effect.

“Whom have you taken into confidence? Have you discussed the issue with stakeholders? The right forum could have been the Jammu and Kashmir legislature, but that does not exist,” Tarigami said.

Behera said the elections would be the first test for the alliance.

“If they stay away from this election, they get clubbed with the Hurriyat (a separatist group). If they join hands and say we will fight it together, then the ball is up in the air right now,” she said.