Joe Biden Suggests Police Aim For the Legs. But What Would That Change?

The presidential candidate calls for law enforcement to injure rather than kill suspects. Critics call him uninformed. 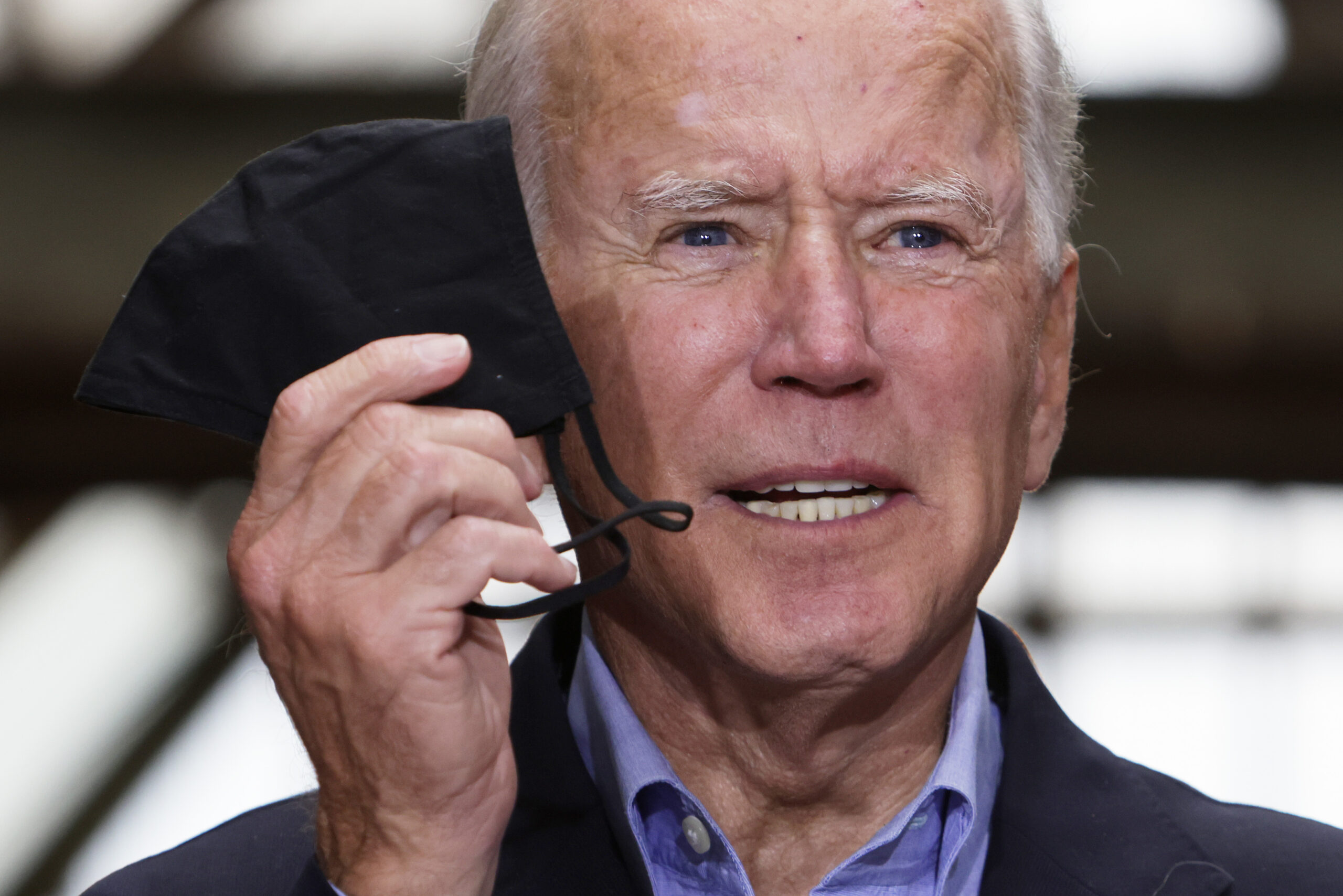 Democratic presidential nominee Joe Biden holds up a mask as he speaks during a campaign stop at Pittsburgh Union Station. (Photo by Alex Wong/Getty Images)

OLYMPIA, Washington—Dueling presidential town halls provided ammunition for supporters of both candidates in the race for the White House. One such point of contention came when former Vice President Joe Biden, the Democratic nominee, suggested law enforcement be trained to disable suspects by shooting them in the legs, rather than at center mass.

“You can ban choke holds, but beyond that you have to teach (the police) how to de-escalate circumstances,” Biden said during the Oct. 15 town hall. “So instead of anybody coming at you and the first thing you do is shoot to kill, you shoot them in the leg.”

Traditionally, law enforcement personnel are trained to aim for available center mass, which affords a greater chance of hitting a vital organ and therefore stopping a target. Police are trained to fire at center mass repeatedly until the target is stopped, or no longer a threat.

It wasn’t Biden’s first time making this suggestion. He recommended “teaching a cop, when there’s an unarmed person coming at them with a knife or something, shoot them in the leg instead of in the heart” at a meeting with Wilmington, Delaware, community leaders in June.

Biden’s comments were in response to questions on how his administration would reform policing policy, which has been heavily scrutinized since the killings of Breonna Taylor and George Floyd by police officers in March and May, respectively.

A common criticism of police training in America is that it emphasizes a “warrior” mentality. Suspects are seen primarily as threats. However, many situations police encounter in the field can be resolved by talking down a suspect—in other words, by conversation rather than bullets.

Many larger departments, such as those in Dallas, New York and Chicago, have successfully implemented de-escalation training, with corresponding drops in violent incidents. However, without statewide mandates, officer training varies widely from one jurisdiction to the next. Some states, like Washington, have recently mandated that all law enforcement officers receive violence de-escalation training.

Biden’s shoot-for-the-limbs recommendation has garnered substantial criticism. Often quoted in that criticism is a paper written by Force Science Institute Executive Director Bill Lewinski, stating, “Hands and arms can be the fastest-moving body parts. An average suspect can move his hand and forearm across his body to a 90-degree angle in 12/100 of a second. He can move his hand from his hip to shoulder height in 18/100 of a second. The average officer pulling the trigger as fast as he can on a Glock, one of the fastest-cycling semi-autos, requires 1/4 second to discharge each round. There is no way an officer can react, track, shoot and reliably hit a threatening suspect’s forearm or a weapon in a suspect’s hand in the time spans involved.”

Lewis “Von” Kliem, director of community relations and executive editor of the institute, said that the targeting of center mass “comes down to where (the officers) stand the highest chance of hitting a given target. Generally, we’ve found that officers don’t get enough training or have enough expertise to hit limbs, especially in those situations where you have compressed time or high stress. There’s a misunderstanding that people outside law enforcement have regarding the level of accuracy officers are trained to in those situations.”

Criminologist David Klinger, a former police officer, wrote in 2016 that “shooting to injure or maim someone wouldn’t stop an aggressive subject … and officers are trying to stop the threat to their life, or the life of their partner or a citizen.”

“As a policy, shoot to wound is a really bad idea because it would give the police permission to take that gun out of the holster under any circumstance,” wrote Candace McCoy, a professor of criminal justice at the City University of New York, But in the wake of the 2014 fatal shooting of Michael Brown.

Biden’s recommendation is only one of several criminal justice policy proposals aimed at curbing systemic misconduct within police departments and the justice system by “expanding the power of the U.S. Justice Department to address systemic misconduct” and “establishing an independent task force on prosecutorial discretion.”

The backlash by law enforcement groups against Biden’s proposals is indicative of their past support for Trump over his 2016 Democratic opponent Hillary Clinton. However, this support is not as universal in 2020, with a collective of some 175 law enforcement officials releasing a statement in September endorsing Biden and slamming Trump as “lawless.”