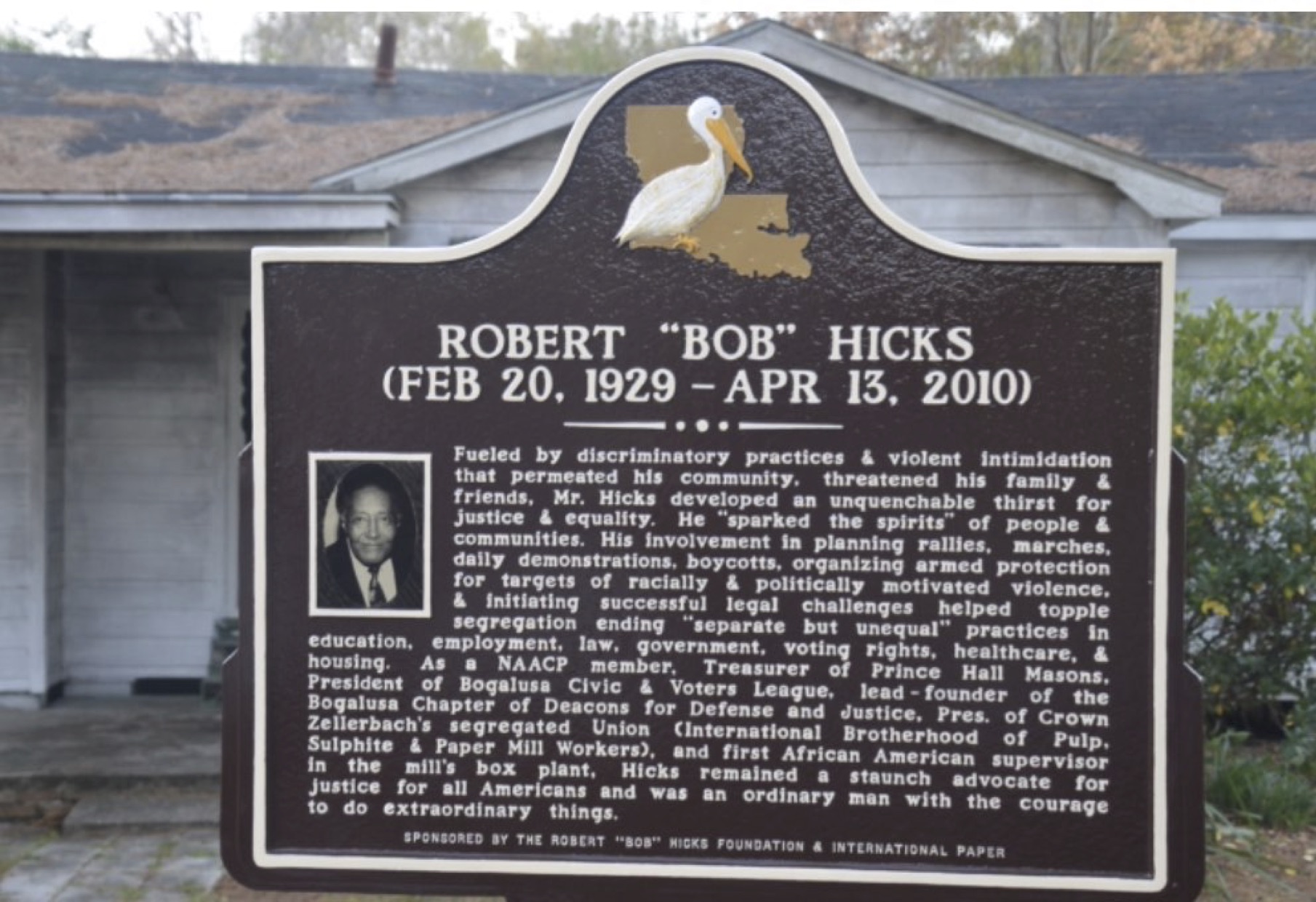 This unremarkable single-story, 1,590-square-foot mill town structure was similar to the ranch houses and bungalows built to house workers of the Great Southern Lumber Co. However, its modesty belies its social, cultural and political significance as the hub of the city’s civil rights movement in the 1960s.

It was here, on Feb. 21, 1965, that activists Robert “Bob” Hicks, Bert Wyre, Fletcher Anderson and Charles Sims founded the Bogalusa chapter of the Deacons for Defense and Justice.

The Deacons: An Ironic Forgotten Footnote in History?

In his book, “The Deacons for Defense: Armed Self-Defense and the Civil Rights Movement,” historian Lance Hill wrote, “Much of the history of the civil rights era rests on the myth of non-violence: the notion that the civil rights movement achieved its goals through non-violent direct action. [On the contrary], black violence and civil disorder played an indispensable role in forcing the federal government to enforce the newly enacted civil rights laws.”

The Deacons for Defense and Justice, an armed African-American self-defense group founded in 1964 by Earnest “Chilly Willy” Thomas and Frederick Douglass Kirkpatrick in Jonesboro, La, included World War II and Korean War veterans working to protect members of the Congress of Racial Equality, or CORE, from Ku Klux Klan violence. CORE and other organizations that promoted nonviolence supported armed self-defense, arguing that the changing federal laws were doing little to protect activists at the local level.

“In the southern freedom struggle, armed self-defense became a pragmatic necessity because of the daily threats and the violence that activists faced,” said Simon Wendt, associate professor of American Studies at Goethe University in Frankfurt, Germany. “As one CORE activist once said in 1965 — and I’m paraphrasing here — protected nonviolent protest tended to be more popular than unprotected nonviolent protest. As in the case of nonviolence, many activists viewed self-defense as something that the violent situation simply required, not necessarily an ideological choice.”

Pragmatism and ideology intersected on a national level during James Meredith’s one-man March Against Fear from Memphis, Tenn., to Jackson, Miss., on June 6, 1966. Wounded by a sniper’s bullet and unable to complete the march, Meredith reluctantly agreed to allow the NAACP, CORE, the Student Non-Violent Coordinating Committee (SNCC), the Urban League, and the Southern Christian Leadership Conference (SCLC) — headed by the Rev. Martin Luther King, Jr. — to take up his cause.

After much deliberation and at the urging of SNCC’s Stokely Carmichael, all but two of the groups agreed to deploy a contingent of Deacons from Chicago, Louisiana and Mississippi to protect the route to Jackson, including King’s SCLC.

“King initially disagreed with including the Deacons in the march, but was ultimately convinced to allow their participation if the march maintained the banner on nonviolence,” said Akinyele Umoja, professor of African American studies at Georgia State University.

Fearing a blow to their identities as proponents of nonviolence, the Urban League and NAACP opted not to participate.

“The Deacons’ inclusion in a march sponsored by national civil rights movement organizations represented an important shift in the black freedom struggle,” said Umoja, author of “We Will Shoot Back: Armed Resistance in the Mississippi Freedom Movement.” “SNCC, CORE and SCLC, as well as their national leadership, were relying upon organized black militants, not the federal government, to defend their organizations and the participants in this campaign.”

Although the march continued without incident, these organizations gave little public credit to the Deacons.

“For CORE and others, nonviolence had to be the face of the movement for federal support, for northern support, for president of the United States support,” said Umoja. “Black men with guns was not the best way to get support.”

Although the public face of the movement was of nonviolence, the Deacons boasted 20 chapters across Louisiana, Mississippi and Alabama in its heyday.  Yet, with the emergence of the Black Power movement and an increasing number of Black elected officials across the South, the Deacons were all but obsolete by 1968.

Bogalusa is remembered as the apex of the Deacons’ power.

The Movement in Bogalusa

On Feb. 1, 1965, Robert “Bob” Hicks, a local mill worker and activist, and his family were having dinner with two white CORE workers who were in town to protest segregated public accommodations in Bogalusa.

Their meal was interrupted by a visit from Bogalusa Police Chief Claxton Knight, who told Hicks that a mob of 200 was threatening to murder him and his family and burn his house to the ground if the activists did not leave. Undaunted and expecting no help from the police, Hicks called in a mob of his own. Within minutes, the Black men of Bogalusa — armed with shotguns — filed into the Hicks home.

“The police watched my father’s friends and neighbors arrive and take positions in the yard, and on the roof, and around the house,” said Barbara Hicks Collins, Hicks’ daughter, now 73. “After learning that  black men in Jonesboro had done something similar, my father got those friends and neighbors together and formed the Bogalusa chapter of the Deacons for Defense and Justice.”

Likely alerted by the police, the white mob never showed up.

Soon after, Hicks and his fellow Bogalusa Deacons set up shop in his home, converting it into a radio communications and command center, meeting place and medical triage station.

The Bogalusa Deacons, led by Hicks, gained national notoriety due to the events of May 19, 1965, when they led a group of Black citizens to the whites-only Cassidy Park, the largest public park in the city. The black citizens were soon set upon by a white mob who, along with local police, attacked them with clubs and leather belts.

The Cassidy Park incident did yield positive results. Four days later, Bogalusa Mayor Jesse Cutrer signed a six-point desegregation agreement and, on July 10, Hicks v Knight resulted in an injunction ordering law enforcement to protect protesters from “physical assaults and beatings” and to cease “preventing or discouraging the exercise of their rights to picket, assemble peaceably and advocate equal rights” for African Americans.

The Past as Prologue

In the front yard sits the first official Louisiana Historical Land Marker for an African American in his honor. The Robert “Bob” Hicks House is listed on the National Register of Historic Places for its role in Bogalusa’s civil rights movement and is the first African-American historical site in Washington Parish to gain this recognition.

Now, Barbara Hicks Collins, who runs a foundation in her father’s name, is converting the home into Bogalusa/Washington Parish’s first civil rights museum and multicultural center.

“We are projecting completion of the construction phase within the next four to six months,” said Hicks Collins, a retired New Orleans public health official. “We don’t have a projected opening date, but it should be some time in the next year, if we all survive COVID-19.”