Close to the Afghan border, the area has seen an increase in terror activities in recent years. 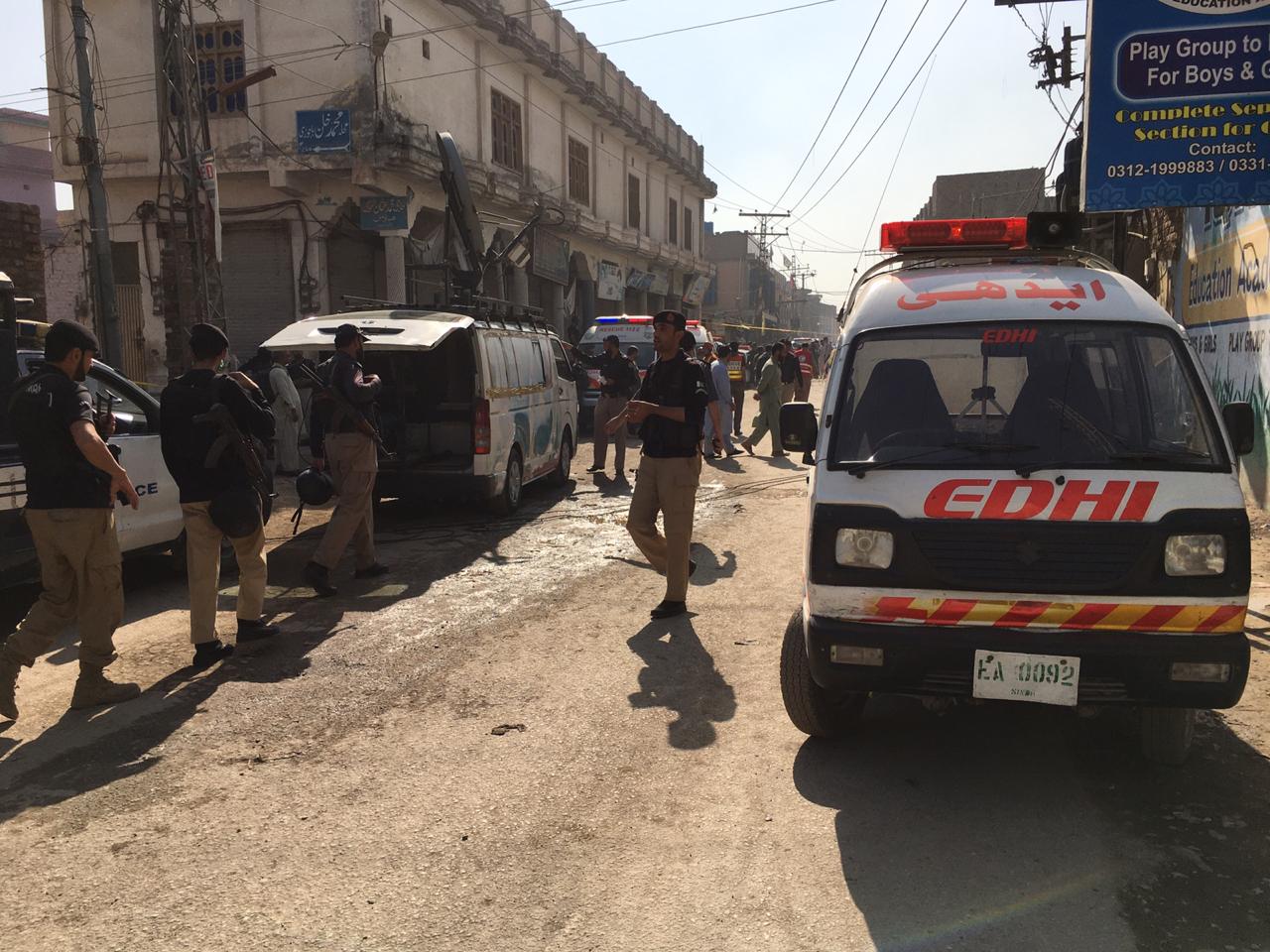 Security personnel outside the religious seminary where the blast took place in Peshawar, Pakistan on Oct. 27, 2020. (Courtesy: Bilal Ahmed.)

At least seven people were killed and 70 injured in a madrasa (religious seminary) on Oct. 27 when a bomb exploded in Peshawar, northwest Pakistan, local police said.

The explosive devices were in a bag that was abandoned at the madrasa, where students were studying the Quran.

“Initial information suggests that a man came inside the main hall of the seminary and left a bag. After a while, the blast happened,” said Peshawar’s senior superintendent of police, Mansoor Aman. “There were 40-50 students in the hall, which also serves as a mosque at the time of the blast.

“All injured persons have been shifted to Lady Reading Hospital, while all hospitals in the city have been put on alert. A Quran class was in progress when the blast occurred.”

Bilal Faizy, a spokesperson for Rescue 1122, an emergency service in Pakistan, said that about 70 students were taken to the hospital.

The religious seminary is in the densely populated area of Dir Colony. Peshawar is the capital of the Khyber Pakhtunkhwa province, about 114 miles northwest of Islamabad.

Close to the Afghan border, Peshawar has been the site of a series of terror attacks during the recent Taliban resurgence in the area. Last month, five people were killed in a blast in Nowshera, about 27 miles east of Peshawar. The explosion occurred in a market along the Kabul River. While some people were collecting scraps from the stones alongside the river, explosive material in some of the scraps detonated as the materials were being weighed.

On Dec. 16, 2014, six gunmen from a Taliban affiliate entered opened fire in a school in Peshawar, killing 149, including 132 schoolchildren.

This week’s attack was the first major one in Peshawar since a military operation against the militants in 2014.

“There is a general alert on terror activities in Peshawar and Quetta, the capital of the province of Balochistan,” said Kamran Bangash, information adviser to the chief minister of Khyber Pakhtunkhwa, Mahmood Khan.

Images from the attack show craters in the floor of the seminary’s hall, shattered windows and the badly damaged roof.

“There was no specific threat against the seminary,” said Khan.

No group has claimed responsibility for the attack so far.

Khyber Pakhtunkhwa Health Minister Taimur Saleem Jhagra rushed to the site after the blast. He told the media that his government was focusing on medical aid for the injured.

Balochistan government spokesperson Liaquat Ali Shahwani last week said that the National Counter Terrorism Authority had issued a security alert for the public rallies of opposition parties in Quetta and Peshawar, noting that there was “credible information” about the possibility of subversive activities.

“Militants have targeted religious seminaries in the past as well,” said Haroon Rashid, editor of news site Independent Urdu.

“We have seen attacks in Balochistan, but this is the first major attack in Peshawar following the military operation and the reunification of banned militant outfit Tehreek-e-Taliban Pakistan (TTP).”

The former tribal areas have seen an increase in attacks on security forces since the Zarb-i-Azb operation in June 2014.

The Jamaat-ul-Ahrar, the Hizb ul-Ahrar, and Hakeemullah Mehsud were the three major factions in the TTP until they splintered in 2014 over leadership issues. It was announced last month that they were reuniting under the TTP.

The banned sectarian group, Lashkar-e-Jhangvi, which mainly operates in the western province of Balochistan, has also joined the TTP.

In the first interview to the Indian media by any Pakistani official after a constitutional change repealing the special status in Indian-administered Kashmir on Aug. 5, 2019, Adviser on National Security and Strategic Policy Planning Moeed Yusuf accused India of funding the merger of Taliban splinter groups and also of funding terrorists in Balochistan.

“Pakistani Taliban has just merged with four other militant organizations,” Yusuf said in an interview with The Wire. “I am revealing information to you, and such information will come out regularly. This one-sided story will change, Pakistan has changed, India has changed.”

He alleged that “in 2019, Indian embassy funds were used [equaling] more than a million U.S. dollars to effect the merger of TTP. Congratulations to RAW [India’s premier intelligence agency] in creating an organization to kill Pakistanis.”