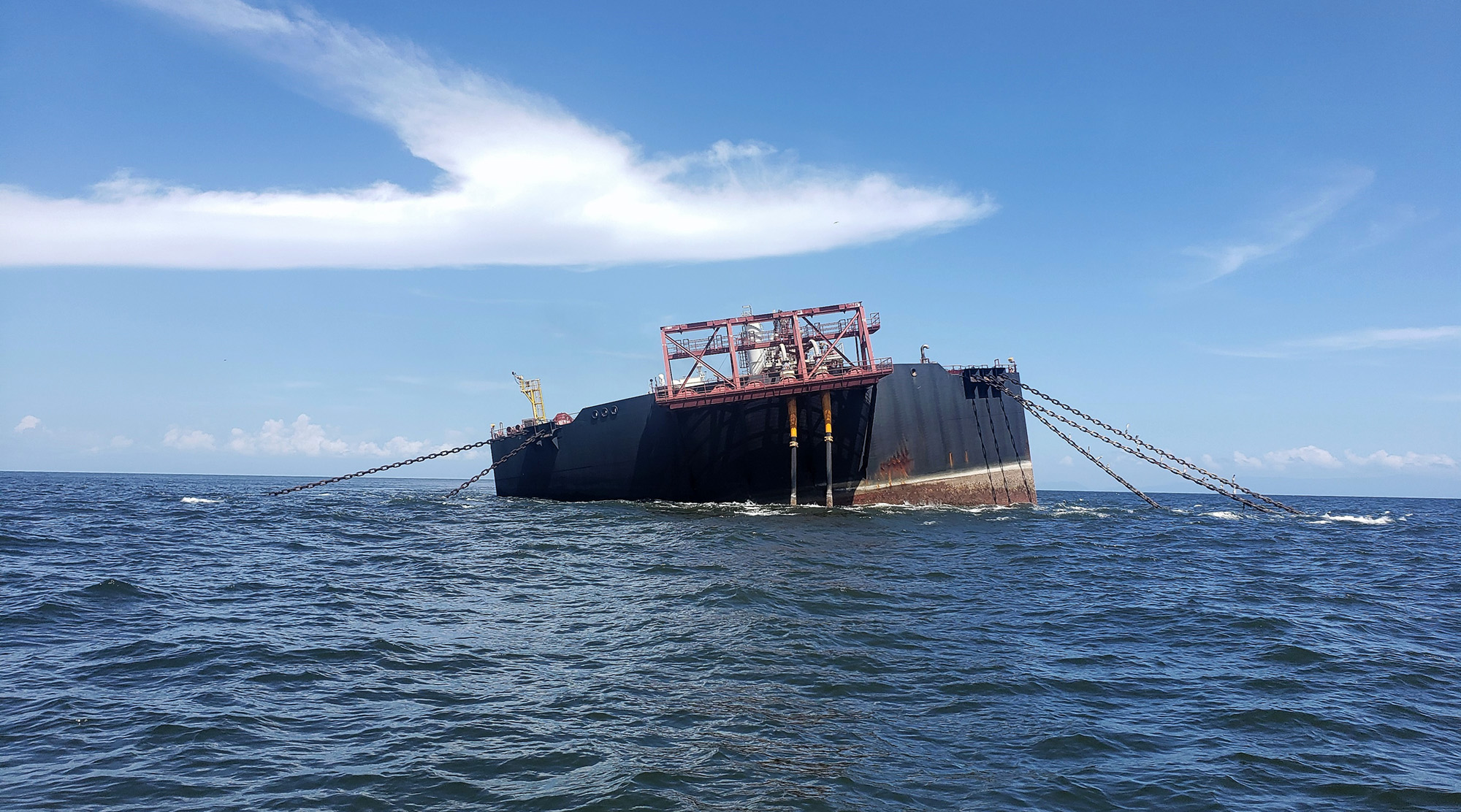 The boat Nabarima leaning on one side is at risk of sinking off the coast of Venezuela, October 21, 2020. (Fishermen and Friends of the Sea/Newsflash).

GULF OF PARIA, Venezuela—A Venezuelan ship carrying more than 1 million barrels of oil is listing in the Caribbean Sea, threatening to create an environmental disaster that could be the region’s worst ever.

The storage and offloading vessel is listing to one side in the Gulf of Paria, between the island of Trinidad and Venezuela’s east coast, where it is permanently moored.

The vessel, dubbed the Nabarima, is operated by Petrosucre, a joint venture between PDVSA, the Venezuelan state-owned oil company, and Italian multinational Eni, one of the world’s seven “supermajor” oil companies.

Environmental groups have expressed concern that the estimated 1.3 million barrels of crude on the vessel could spill into the sea, despite recent reports that a ship-to-ship transfer of the oil is underway.

“It appears that a Venezuelan oil tanker, the ICARO, has approached the FSO Nabarima and is transferring some of the oil within, affording an opportunity to assess the listing,” Gary Aboud of Fishermen and Friends of the Sea said in a statement released Oct. 21.

“This does not mean the Caribbean is out of deep waters, nor can we breathe a sigh of relief. There are insufficient measures in place to contain any spillage that may occur during the transfer, especially since the FSO Nabarima is unstable,” he said.

It’s unclear if the roughly 870-foot vessel has the necessary oil-spill containment apparatus around it, should there be an accident. If that happens, it would threaten nearby fragile mangroves and marine and bird sanctuaries.

Experts are afraid the boat, which started listing in July, will capsize, as photos show that it is sinking more each day. The vessel, built in 2005, is listing by more than five degrees and has sunk by about 48 feet. Experts believe this may be due to excess weight.

While averting a spill is the central concern in the Nabarima’s case, it’s too late to address the environmental disaster that’s been playing out since late July off the island of Mauritius.

As reported previously by Zenger News, Greenpeace and other environmental groups have blasted the Mauritian government’s decision to tow and then sink the Japanese tanker MV Wakashio — which went aground in a lagoon on the island nation’s shore and subsequently leaked up to 1,000 metric tons (about 8,500 barrels) of heavy oil into a lagoon.