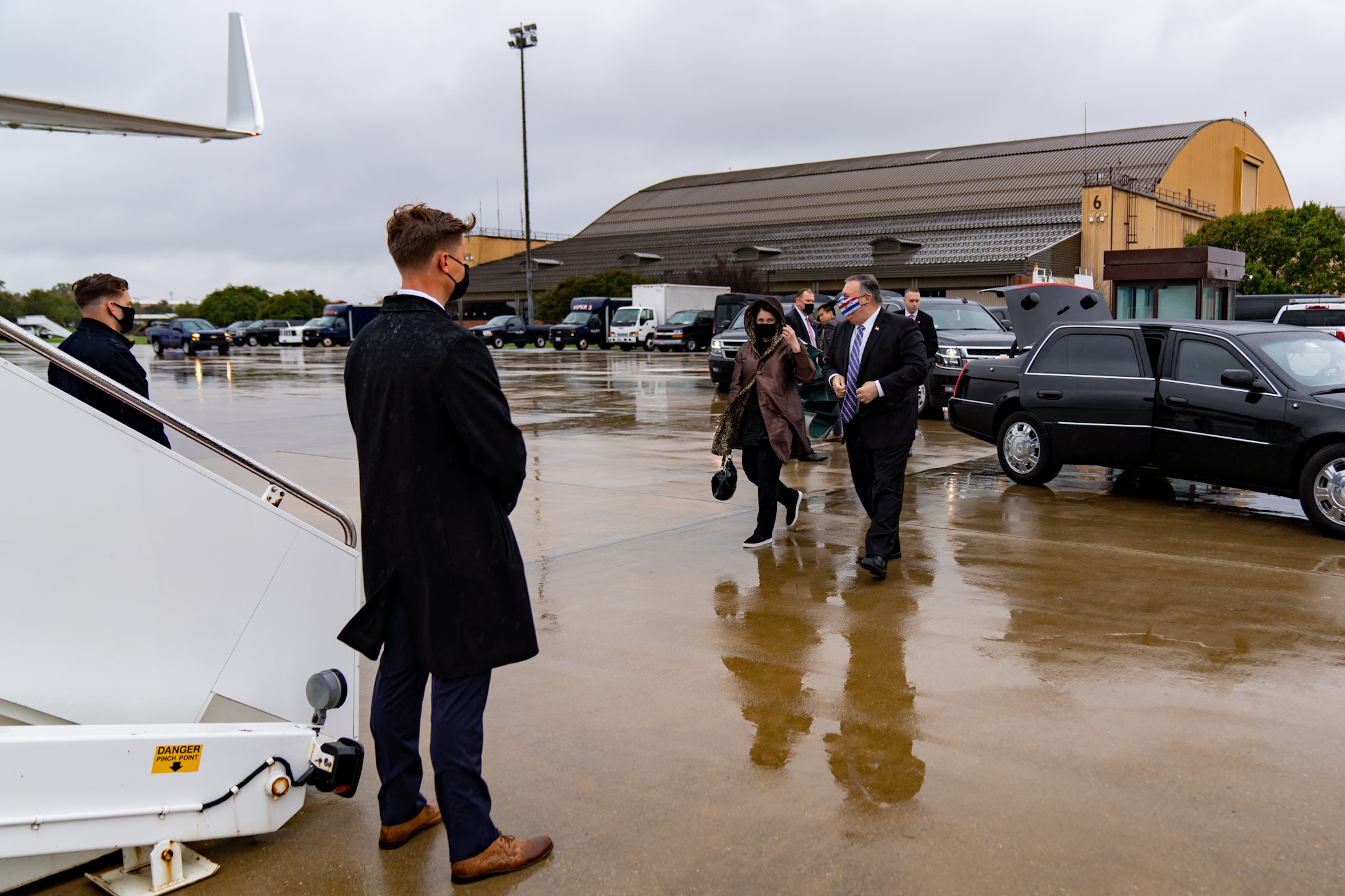 US Secretary of State Mike Pompeo boards his flight on Oct. 25 to India. (Courtesy: Mike Pompeo.)

Human rights reconciliation and negotiation for a $480 million Millennium Challenge Corporation (MCC) grant will be on the agenda when U.S. Secretary of State Mike Pompeo visits Colombo on Oct. 27.

Pompeo is expected to meet President Gotabaya Rajapaksa, Prime Minister Mahinda Rajapaksa, and Foreign Minister Dinesh Gunawardena to emphasize the U.S. commitment to a strong, independent and democratic Sri Lanka, and to shore up the two countries’ long-standing partnership.

“We encourage Sri Lanka to review the options we offer for transparent and sustainable economic development in contrast to discriminatory and opaque practices. We urge them to make difficult but necessary decisions to secure its economic independence for long-term prosperity,” U.S. State Department official Dean Thompson said in a teleconference briefing on Oct. 22.

Pompeo’s visit will be the first by a top U.S. official since that of former secretary of state John Kerry in 2015. It comes on the heels of a $500 million loan from China during a recent visit by Yang Jiechi, a top-level delegate of the Chinese Communist Party.

“Sri Lanka is a growing economy and it needs assistance. Anyone who offers help without any strings attached will be considered seriously. Nothing comes free and everything comes with an attachment. As long as these attachments do not infringe on the sovereignty and dignity of the country, it’s fine,” said Keheliya Rambukwella, Sri Lanka’s mass media minister.

While Sri Lanka would like to work on its negotiations for the stalled MCC development grant, allegations of human rights violations raised by Amnesty International, dating to the 2009 civil war, are likely to be a sticking point.

On Oct. 19, Amnesty sent a letter to Pompeo, documenting “the deterioration of the human rights situation in Sri Lanka under the current government.”

“Under the current government, the space for dissent and criticism is rapidly shrinking, as demonstrated by a series of cases, including the harassment of New York Times journalist Dharisha Bastians, the arbitrary detention of blogger Ramzy Razeek and lawyer Hejaaz Hizbullah, and the ongoing criminal investigation against writer Shakthika Sathkumara,” the letter states.

Further, the Amnesty letter states: “Eleven years after the end of the conflict between the government forces and the Liberation Tigers of Tamil Eelam (LTTE), Sri Lanka has not yet addressed the allegations of grave international humanitarian law and human rights violations documented by several UN investigations. The government has also not held the alleged perpetrators of international crimes accountable.”

Thompson said that the U.S. will continue to urge Sri Lanka “to advance democratic governance, human rights, reconciliation, religious freedom, and justice, which promote the country’s long-term stability and prosperity and ensure the dignity and equality of all Sri Lanka’s diverse communities.

“We watch closely the developments in Sri Lanka on these fronts, and the secretary will, of course, be raising issues related to human rights reconciliation and our commitment to democracy. Right now, we think they (Sri Lanka) are at a point where they will have to make some choices about the directions they want to head in,” Thompson said during the briefing in advance of the secretary’s trip.

The Sri Lankan government has denied allegations of human rights violations, particularly in regard to journalists.

“The entire drama was hilarious in the Dharisha Bastians case. The Criminal Investigation Department arrested her and seized her laptop, which any investigating agency would do,” Rambukwella said. “People are taken into custody all over the world on suspicion and are questioned. They are free to go if that’s not the case. This is a common pattern all over the world.”

Bastians, a journalist with Sri Lanka’s Sunday Observer and a contributing editor to The New York Times, was questioned by the agency after she tried to investigate the alleged abduction of a Swiss employee in Sri Lanka.

In March 2019, Amnesty International urged “faster progress on truth, justice, reparation, including guarantees of non-recurrence” in Sri Lanka after the UN Human Rights Council drafted a resolution “in the pursuit of justice for the victims of alleged international crimes during Sri Lanka’s decades-long internal conflict.”

Political analyst Paikiasothy Saravanamuttu, executive director of the Centre for Policy Alternatives, said he believes Amnesty wrote to Pompeo because the UN resolution was something that Amnesty took the lead in.

Rambukwella, the mass media minister, said the government had responded to the UN in that regard and was willing to answer others as well.

“The British High Commission’s defense attaché had sent daily dispatches on what was happening. It took a lot of time to get hold of those documents, which state casualties of the war were less than 7,000. We have enough evidence to prove the motto of Sri Lanka during the war was to have zero casualties. There could be a few incidents that were exaggerated by the diaspora,” he said.

In addition to addressing human rights issues, the U.S. seeks to strengthen its ties with the island nation, given its geostrategic location in the Indian Ocean region, in light of China’s expansionist policies. China is seeking to expand its footprint in the country through infrastructure projects. In addition, the Hambantota port was recently leased to China for 99 years after Sri Lanka failed to repay the loan.

“We want to partner with Sri Lanka on our shared goals of sustainable economic development and a free and open Indo-Pacific,” Thompson said. “With regard to China, in particular, I think we’re looking to frame a discussion with them (Sri Lanka) towards a more positive trajectory. So, we’ll be definitely discussing where they’re headed.”

Saravanamuttu considers the U.S.’ interest in engaging with Sri Lanka to be more political than economic.

“The U.S. might be interested in engaging more on the economic front, but their involvement in Sri Lanka has always been a political one. There is opposition towards the U.S because it’s an imperialist power and is trying to rope Sri Lanka into an anti-Chinese coalition. So, there are political obstacles,” he said.

He believes the U.S. would want Sri Lanka to be part of any coalition to curb Chinese influence in the region.

Sri Lanka began talks on the Free Trade Agreement with China during Jiechi’s recent visit. President Gotabaya also expressed his aspirations to develop Sri Lanka on the lines of China and was assured continuous assistance by the Chinese delegate.

Pompeo is scheduled to arrive in Sri Lanka on Oct. 27, a day after his stopover in New Delhi, India.