The ruling party claims poor ratings are part of an opposition campaign to discredit the video. 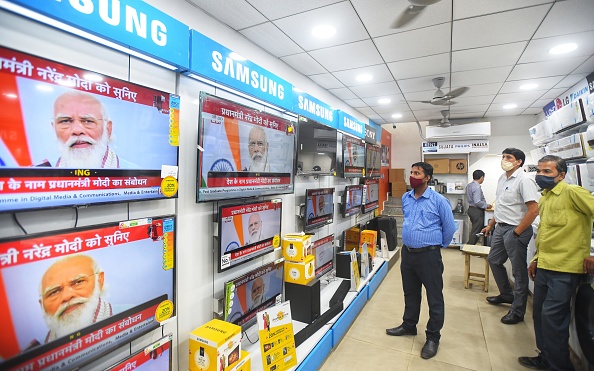 People watch a live telecast of Prime Minister Narendra Modi's address to the nation, at Khanna Market, New Delhi, India, on October 20, 2020. Modi asked citizens not to lower their guard in the fight against COVID-19 during the festive season as the virus is still around even though restrictions have been eased. (Courtesy: Amal KS/Getty Images.)

Minutes after Prime Minister Narenda Modi’s recent address to the nation on the Covid-19 pandemic streamed on YouTube, a number of social media users protested, complaining that ratings were blocked.

“We, all the Indians have come a long way in the fight against Corona, since the Janata Curfew [in March] till today,” Modi said at the beginning of his address on Oct. 20. “But we must not forget that even though the lockdown has been lifted, the virus is still present. We must not allow the stable situation that India has been able to achieve in the last seven-eight months with the effort of every Indian to deteriorate. We have to improve further.”

Modi’s cited figures showing that the recovery rate in the country has improved and the fatality rate is low.

“In India, about 5,500 people per 10 lakh (1 million) population have contracted coronavirus, while in countries like America and Brazil, this figure is close to 25,000,” he said.

“India is succeeding in saving the lives of more and more of its citizens compared to the resource-rich countries of the world,” Modi said.

In a similar address on March 19, the prime minister announced a 14-hour voluntary lockdown, or Janta Curfew, starting on March 22.  Then, on March 24, Modi announced a complete lockdown, which has been criticized for being too strict.

While Modi has defended and praised his government’s handling of the pandemic, the opposition has targeted him. Congress party leader Rahul Gandhi accused Modi’s government of mishandling  the pandemic.

Shortly after Modi’s address on Oct. 20, viewers accused the ruling Bharatiya Janata Party (BJP) of disabling the “like” and “dislike” ratings on the video. The BJP hosts the YouTube channel on which the address was streamed.

A popular Twitter handle claimed that the BJP disabled the “dislike” button after 4,500 clicked on it within minutes. On the YouTube site, some people posted comments about the “like” and “dislike” options being disabled.

While it is possible to click on like or dislike on the video, the BJP channel’s ratings feature showing how many users have liked or disliked the video, is shut down.

The 13-minute video on Youtube has been viewed over 1.2 million times on BJP’s channel since the prime minister’s video was streamed. It has garnered 7,981 comments, many critical of the government, while some others praised the government’s efforts.

On Modi’s personal YouTube channel, the video has 70,000 likes and 40,000 dislikes. There are zero comments.

The same video streamed on the Prime Minister Office’s YouTube channel, where it has 99,000 dislikes and 75,000 likes. The comments section of that channel, too, has been disabled.

The opposition Congress party attacked the ruling party on the issue.

“Mr. Modi is driven by an obsession to have greatness thrust upon him,” said Pawan Khera, a Congress spokesperson. “It is this mindset which does not allow him to face press conferences, to have uncurated interactions with groups of people or to face honest criticism. He is a product of an image-branding industry.”

Modi is among the world’s most-followed leaders on social media with over 63.1 million followers on Twitter.

In August, Modi’s “Mann Ki Baat” — a monthly interactive program aired on radio, TV and social media — prompted a wave of dislikes. The 31-minute video, which has been watched over 7 million times, has over 1.2 million dislikes on the BJP YouTube channel. On PMO India YouTube channel, the video has 200,000 dislikes and 115,000 likes.

BJP IT cell chief Amit Malviya said at the time that the dislikes were part of a Congress campaign. He suggested that bots were pushed to discredit the video.

“Over the last 24hrs, there has been a concerted effort to dislike Mann Ki Baat video on YouTube&mldr; So low is the Congress on confidence that it has been celebrating it as some sort of conquest! However, data from YouTube suggests that only 2% of those dislikes are from India&mldr;” he tweeted.

“The rest, 98%, like always, came from outside India! Bots and Twitter accounts from overseas have been a consistent feature of the Congress’s anti JEE-NEET campaign. There is a huge spike in activity by Rahul Gandhi’s favourite Turkish bots!” Malviya tweeted.