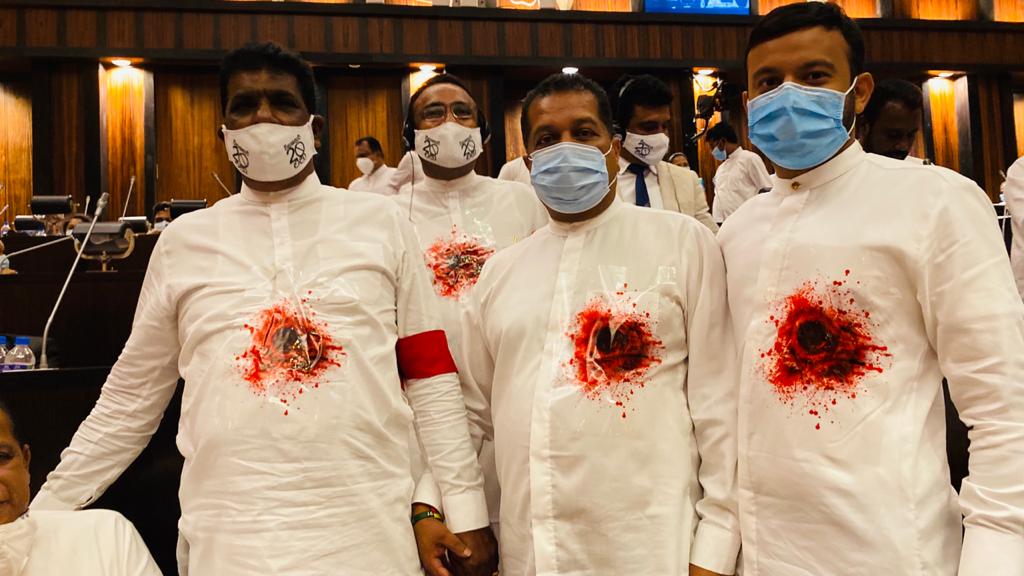 Members of Sri Lanka's opposition party wore stickers of gunshot, implying that democracy had been shot dead, after 20A amendment was passed in the parliament on Oct. 22. (Courtesy: Harin Fernando.).

Sri Lanka’s parliament on Oct. 22 passed the controversial  20th Amendment to the Constitution, expanding the powers of the president and diminishing the role of the prime minister, among other major changes.

The amendment passed by a two-thirds vote after the second and third readings. Of the 225 parliamentarians, 156 voted for and 65 voted against. The new measure gives the president the power to dissolve parliament after two years and six months of taking charge or through a resolution passed by half of the members, and also grants him the authority to remove the prime minister.

It replaces the 19th Amendment, under which the president could only dissolve parliament after a mandatory period of four years and six months, or through a resolution passed by two-thirds of the members.

The 20th Amendment also allows those with dual citizenship to hold political office.

The new measure is seen in some quarters as a way to reinforce President Gotabaya Rajapaksa’s political clout as he aims to draft a new Constitution, the first draft of which is expected by 2021.

In a speech to parliament on Aug. 20, the president said, “Our Constitution, which has been amended 19 times, from its inception in 1978, has many ambiguities and uncertainties, presently resulting in confusion. &mldr; Our first task will be to remove the 19th Amendment to the Constitution. After that, all of us will get together to formulate a new constitution suitable for the country. In this, the priority will be given to the concept of one country, one law for all the people.”

With the adoption of the 20th Amendment, the president now has the authority to sack ministers, nominate the chief justice and the two judges of the Supreme Court, and make decisions on matters involving the police and people’s rights and freedoms, as well as dilute the value of examination commissions, which had been autonomous.

The 20th Amendment has been mired in controversy since it was challenged in the Supreme Court after its first reading in September. Objections were raised over how the proposed amendment concentrated power in the hands of the president. However, after making a few changes, the court approved the amendment being presented for a second reading.

The amendment was passed on a day when a sudden curfew was imposed in several localities in the capital of Colombo. The rapid spread of Covid-19 was given as the reason for the curfew, which is in effect until 5 a.m. Oct. 26.

During the voting, members of the opposition Samagi Jana Balawegaya (SJB) party wore a sticker on their chests resembling a gunshot.

“The sticker signifies the shooting and the killing of Sri Lanka’s democracy by approving the 20th Amendment,” said Harsha de Silva, a SJB member of parliament.

However, the president was able to secure some votes from the opposition, including members of the SJB, by promising a better development model for the country. Seven Muslims and one Tamil member of parliament also voted in favor.

“I voted in favor as I feel the country needs a powerful president. Why should we elect a president spending huge funds, tie him and throw him into a river?” said Diana Gamage, an SJB member who voted in favor of the amendment.

“The president made an emotional request to us. There was no debate in the country on dual citizenship. The president said his dual citizenship was made a bar for him to contest the presidential elections. We need to change that,” said Udaya Gammanpila, member of parliament from the Sri Lanka People’s Front (SLPP), the party of President Rajapaksa.

The SLPP held a meeting on Oct. 18 to discuss the concerns about the amendment.

Until now, politicians who hold dual citizenship were not allowed to sit in Sri Lanka’s parliament. President Rajapaksa revoked his U.S. citizenship a year ago to run for president.

The amendment will allow Basil Rajapaksa, another member of the Rajapaksa family holding dual citizenship, to enter parliament. He is the brother of Prime Minister  Mahinda Rajapaksa, and President Gotabaya Rajapaksa.

Including the president and the prime minister, the Rajapaksas hold six major positions in the parliament, with State Minister of Internal Security Chamal, State Agriculture Minister Shasheendra, and Sports Minister Namal.

“The president is trying to amass more power for himself. This is certainly not for the benefit of the people but to launch suppressive and destructive governance similar to that of the erstwhile president J.R. Jayewardene,” said Anura Kumara Dissanayake, leader of the National People’s Power party.  Jayewardene was the second president of Sri Lanka, serving from 1978-1989.

The amendment was also criticized by some supporters of the Rajapaksas, including the Maha Sangha, whose members are from Buddhist monasteries, and Catholic bishops. The Maha Sangha plays a crucial role in preserving Buddhism, whose followers include a large number of Sinhalese, the majority population in Sri Lanka.

Members of the Maha Sangha, particularly the clergy, oppose the amendment on the grounds that it could lead to an “undeveloped tribal society.” They are also critical of the dual citizenship provisions and the perceived lack of transparency in monetary transactions once the Audit Service Commission is abolished.

They believe the government has forgotten those who supported them and helped bring them to power.

Further, Vanaspathi Uruwarigelage Vannila Ettho, chief of the Veddas, the aboriginal inhabitants of the island, believes the amendment will have an adverse effect on society under a future president.