‘I’m the Least Racist Person In This Room’: Trump, Biden Spar Over Race In Final Debate 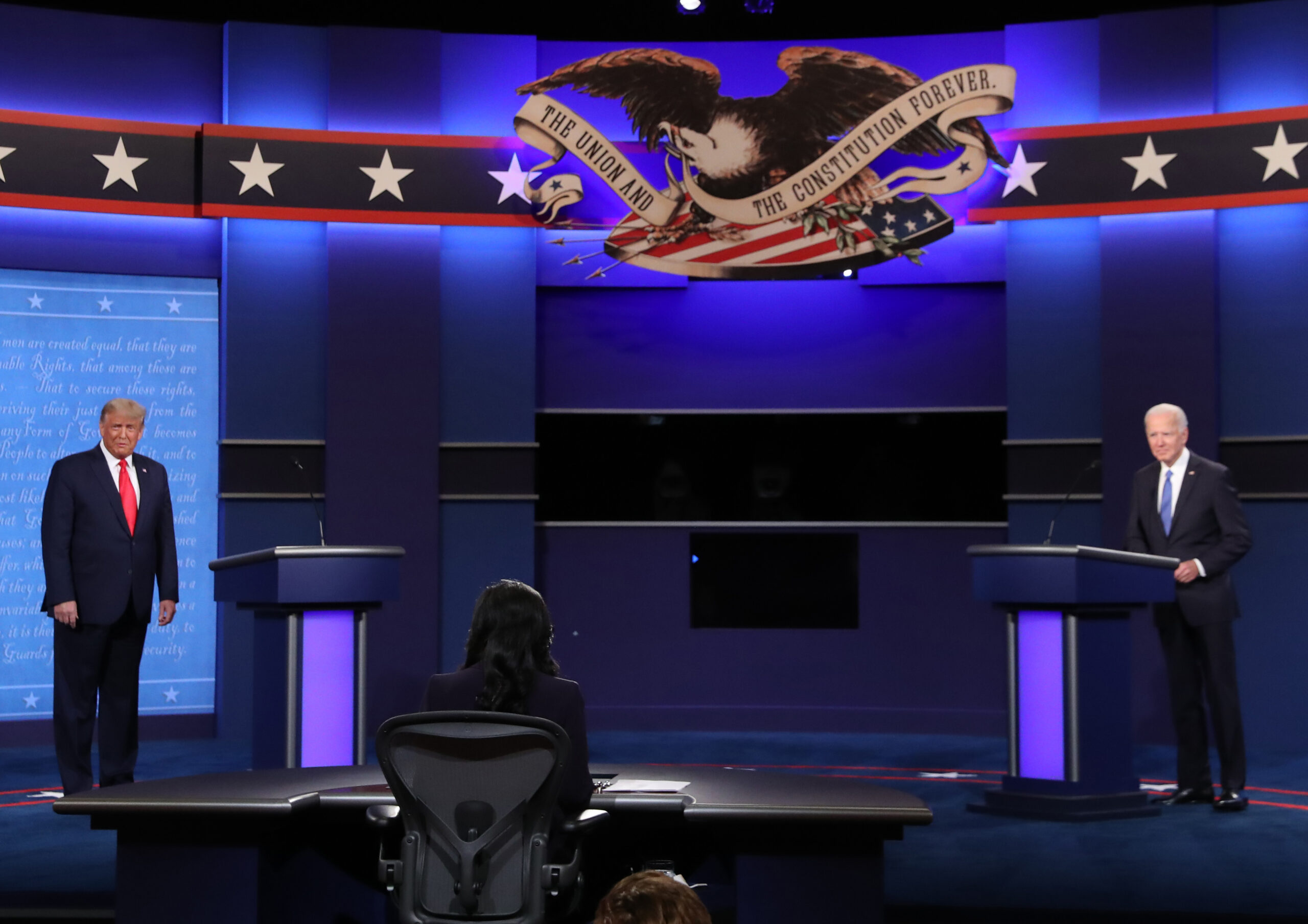 U.S. President Donald Trump (L) and Democratic presidential nominee Joe Biden take the stage for the final presidential debate at Belmont University on October 22, 2020 in Nashville, Tennessee. This is the last debate between the two candidates before the election on November 3. (Photo by Chip Somodevilla/Getty Images)

President Donald Trump and former Vice President Joe Biden fielded questions about race relations in America during the final presidential debate Thursday, after an intense clash on the topic in their first meeting saw Biden calling the president “racist.”

The exchange was one of the more heated of the night, as Biden again took aim at Trump’s attitudes toward minorities.

“He pours fuel on every single racist fire. Every single one,” Biden said. “Started off his campaign, he’s coming down the escalator saying he’s gonna get rid of those Mexican rapists. He’s banned Muslims because they’re Muslims. He’s moved around and made everything worse across the board.”

“This guy has a dog whistle as big as a foghorn,” Biden said, criticizing the moment in their previous debate when Trump told the far-right Proud Boys to “stand back and stand by” instead of directly condemning white supremacy.

Trump defended his characterization of the Black Lives Matter movement as a symbol of hate, saying his first encounter with them was seeing anti-police protesters chant “pigs in a blanket” and “fry them like bacon.”

“I am the least racist person in this room,” Trump said.

The debate at Belmont University in Nashville, Tennessee, was moderated by NBC News White House correspondent Kristen Welker, only the second black woman to moderate a presidential debate solo and the first in nearly three decades. The 90-minute debate also covered climate change, the response to the coronavirus pandemic, national security and relations with Russia, China and North Korea, among other subjects.

Trump pointed to criminal justice reform under the First Step Act, signed in late 2018, to argue that his Republican administration has improved the lives of Black people in the U.S.

“Not since Abraham Lincoln has anybody done what I’ve done for the black community,” Trump said.

Trump also blasted Biden for leading the passage of the 1994 Crime Bill, which Trump said hurts minority communities by “putting tens of thousands of mostly black men in jail.” The bill led to more stringent sentencing and increased incarceration.

“He’s been in government 47 years, he never did a thing except for in 1994, when he did such harm to the black community,” Trump said.

Biden said he has since changed his mind on how to handle drug offenses.

“The fact of the matter is, there is institutional racism in America,” Biden said in his opening response on the topic.

His plan, he said, is to provide people the means to build wealth and live free from violence.

The questions on race relations come as the country has faced widespread protests and demonstrations over policing and criminal justice. The protests started in May in response to the death of George Floyd, a Black man, while in the custody of police in Minneapolis, Minnesota. Video of the incident, in which a white officer knelt on the back of Floyd’s neck, spurred protests in cities across the country.

The wave of unrest continued into the fall, as a Kentucky grand jury decided not to charge officers in the death of Breonna Taylor, a black woman who was shot and killed in March as police carried out a “no-knock warrant.”

Biden confronted the issue of police brutality head on, discussing the differences between how white and black parents advise their children on police interactions.

“I never had to tell my daughter that if she’s pulled over, to make sure she puts both hands on top of the wheel, and don’t reach for the glove box because someone may shoot you,” Biden said.

Early voting has already hit record turnout this year, and polls in states such as California, Ohio and Virginia have been open for weeks. For those yet to make up their minds, tonight’s debate may leave a lasting impression heading into Election Day on Nov. 3.