After His Bout With the Disease, Trump Defends Coronavirus Handling

‘Any person responsible for that many deaths should not remain as president,’ said Biden in the candidates’ final debate. 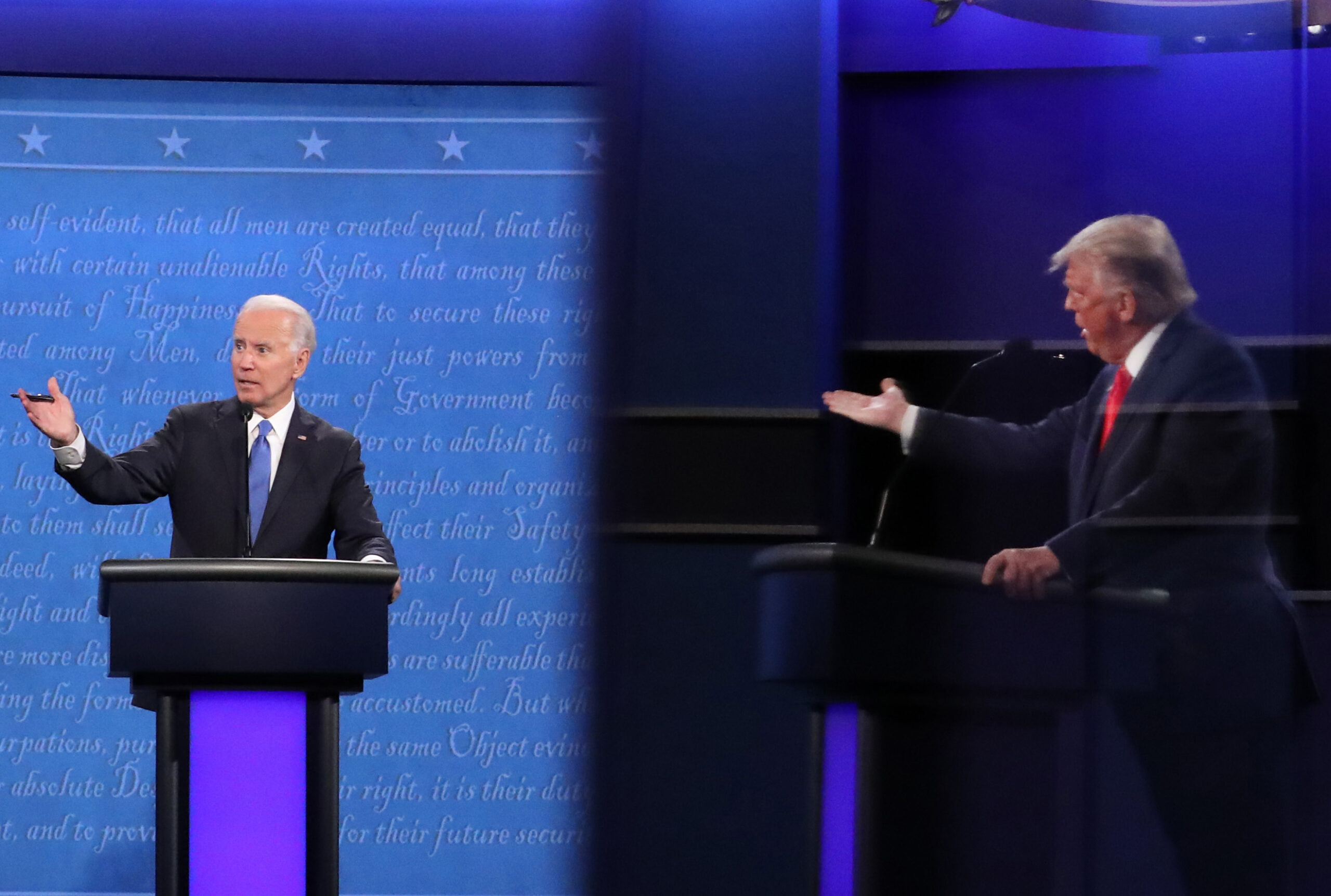 Democratic presidential nominee Joe Biden and U.S. President Donald Trump, shown in a reflection, participate in the final presidential debate at Belmont University on October 22, 2020 in Nashville, Tennessee. This is the last debate between the two candidates before the election on November 3. (Photo by Chip Somodevilla/Getty Images)

President Donald Trump’s final debate appearance Thursday started out restrained, but likely not from the president’s recent case of Covid-19, which led to the cancellation of the second of three planned debates between the Republican president and Democratic candidate Joe Biden.

The president and former vice president started their face-off at Belmont University in Nashville, Tennessee, fielding questions about the coronavirus crisis, the first topic in the 90-minute debate.

Moderator Kristen Welker, the White House correspondent for NBC News, asked both candidates about their approach to fighting the ongoing Covid-19 pandemic, which is expected to surge in the coming months. As the United States’ tally of cases climbs to more than 8.3 million—and 222,896 deaths—Trump defended his handling of the crisis.

“Modeled out, 2.2 million people were expected to die,” said the president, citing a projection by researchers of Covid-19-related deaths if no preventative measures were taken. “We closed up the greatest economy in the world to fight this horrible disease that came from China. If you notice, the mortality rate is down 85%. The excess mortality rate is going down and much lower than almost any other country in the world.”

He also said that “we’re rounding the corner” on the virus and that a vaccine will be announced “within weeks.” However, the number of confirmed cases, hospitalizations and test positivity rates are on the rise, and his public health officials do not foresee a viable vaccine becoming available before April of next year.

Biden, in turn, lambasted Trump for not having a comprehensive plan to combat the worst American public health crisis since the 1918 Spanish flu.

“Any person responsible for that many deaths should not remain as president of the United States of America,” he said. “We’re in a situation where there are a thousand deaths a day now. The expectation is we’ll have another 200,000 Americans dead between now and the end of the year. We’re in a circumstance where the president, thus far, still has no plan.”

Biden then outlined his own plan in which he would encourage the continued use of masks and increase rapid testing, and develop national standards on fully opening the economy.

In response to the president’s assertion that the country is “learning to live with it,” Biden countered: “We’re dying with it.”

“You folks at home will have an empty chair at the kitchen table this morning” because of the president’s inaction, he said.

Welker asked the candidates about the coronavirus relief bill stalled in Congress, and why neither Trump nor Biden were pressuring their respective party leaders to find a compromise.

“Nancy Pelosi doesn’t want to approve anything because she’d love to have some victories on a date called Nov. 3,” said Trump, referring to the Democratic Speaker of the House.

Biden countered by pointing out that the House of Representatives passed the $3.4 trillion relief bill in May.

“They passed this act all the way back in the beginning of the summer,” said Biden. “This Hero Act has just been sitting there. And look at what’s happening. Cities and counties have been forced to fire firefighters, teachers, first responders and law enforcement officers so they can keep running. They have not done a thing for them.”

By any number of metrics, Trump’s uneven pandemic response is making him increasingly unpopular. CNN’s Poll of Polls shows Biden leading the incumbent 52-42, and holding a 4- to 7-point lead in key battleground states Arizona, Florida, Michigan, Pennsylvania and Wisconsin. A new Associated Press-NORC survey revealed that 58% of the respondents disapprove of his handling of the virus, and 76% believe that the country is moving in the wrong direction.

The debate was hosted by the Commission on Presidential Debates, the nonpartisan, nonprofit organization that has sponsored all general election presidential and vice presidential debates since 1987.