The Final 2020 Debate: Trump, Biden Heat Up on Race and Foreign Relations

With less than two weeks until the election, Trump and Biden met for what started as a more subdued second outing. 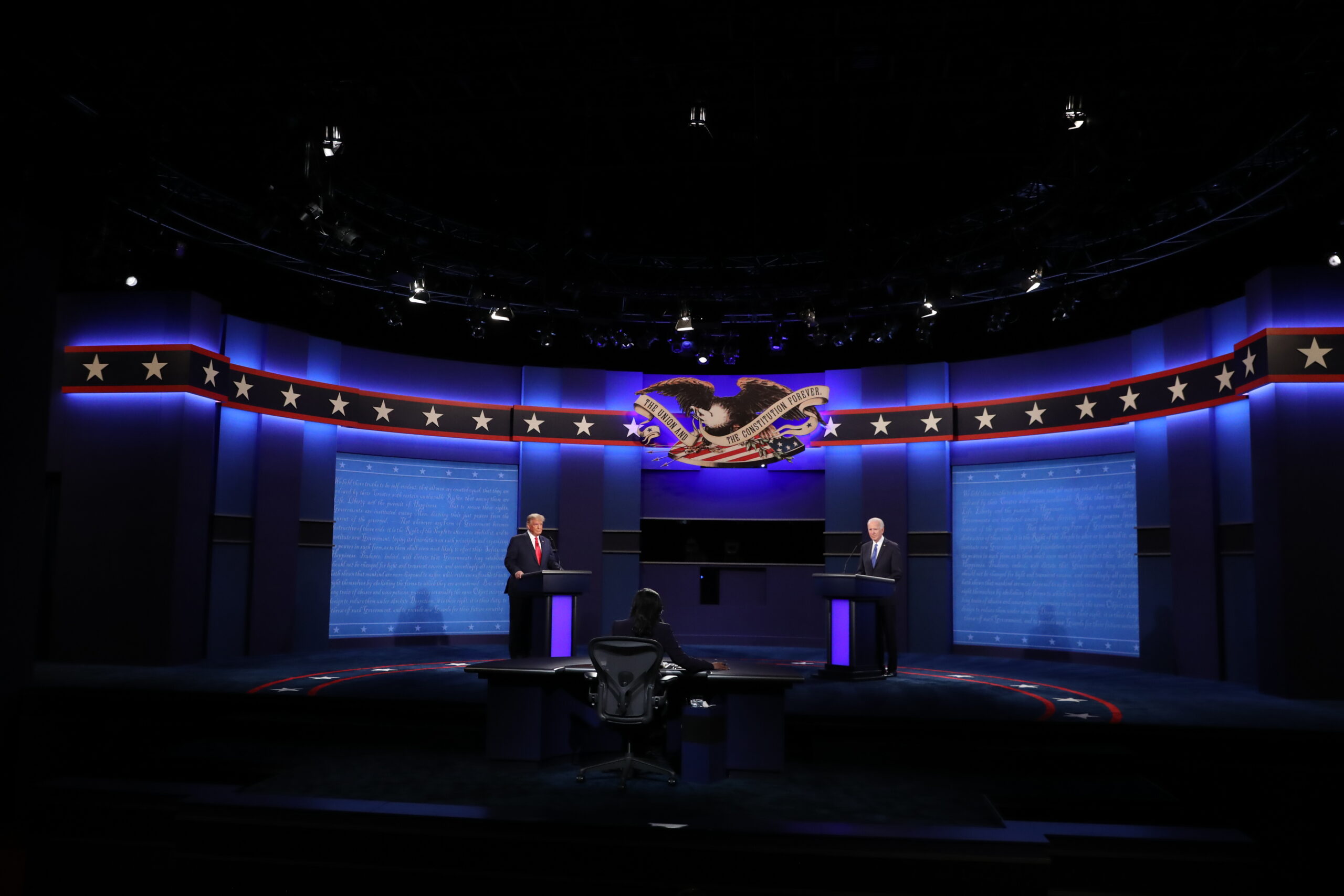 U.S. President Donald Trump and Democratic presidential nominee Joe Biden participate in the final presidential debate at Belmont University on October 22, 2020 in Nashville, Tennessee. This is the last debate between the two candidates before the election on November 3. (Photo by Chip Somodevilla/Getty Images)

President Donald Trump and former Vice President Joe Biden took the stage Thursday in their last chance to give voters a chance to compare the two candidates head to head.

It was the final of what was supposed to be three planned debates after the second debate was canceled due to Trump’s positive COVID-19 test. The candidates’ first bout on Sept. 29 was a raucous meeting, full of interruptions and unorthodox exchanges. Those interruptions led the Commission on Presidential Debates to decide to mute the candidates during their opponent’s time Thursday.

The night opened with questions about the coronavirus pandemic. Biden said the nation is facing a “dark winter” and took aim at Trump for not taking responsibility for the crisis.

“Anyone who’s responsible for that many deaths should not remain as president of the United States of America,” Biden said.

Trump blamed China for the virus, and insisted the country needs to reopen. He called initially hard-hit New York City “a ghost town” and said Americans “are learning to live with it. We have no choice.”

Trump also took aim at the idea of widespread lockdowns.

“These are businesses that are dying, Joe. You can’t do that to people,” he said.

More than 223,000 people in the U.S. have died of COVID-19 and more than 8.4 million have been confirmed with cases since the beginning of the year, according to data compiled by Johns Hopkins University.

“Nancy Pelosi doesn’t want to approve anything because she’d love to have some victories on a date called Nov. 3. Don’t forget, we’ve already approved three plans and it’s gone through. This one she doesn’t want–it’s near the election–because she thinks it helps her politically. I think it hurts her,” said Trump.

But Biden pointed out Congress had already approved the measure.

“They passed this act all the way back in the beginning of the summer. This is like it’s not new,” he said.

The initial relief package, which offered trillions for a variety of programs including a one-time $1,200 payment to individuals, was “a bailout for badly-run, high-crime, Democrat-run cities and states,” Trump said.

Talk of money heated up what started as a measured exchange as the candidates dug into each other’s finances and dealings with other countries. Biden pointed to recent reporting about a previously undisclosed bank account Trump holds in China, and Trump reiterated accusations that Biden’s son Hunter benefited from his father’s position as vice president while serving as a member of the board of Ukrainian energy company Burisma.

“While he was selling pillows and sheets, I sold tank busters to Ukraine,” Trump said. “There has been nobody tougher on Russia than Donald Trump.”

Biden denied Trump’s repeated claims about the younger Biden’s business dealings in Ukraine, and took a swipe at former New York Mayor Rudy Giuliani, the president’s personal attorney, for being the target of foreign disinformation.

The two also sparred over North Korea. Trump has met with its leader Kim Jong Un twice and became the first sitting president to step onto North Korean soil via the demilitarized zone.

Biden drew his line in the sand, saying he would only meet with Kim Jong Un if North Korea promised to reduce nuclear capacity and make the Korean peninsula a “nuclear-free zone.”

The clash also became heated as the two compared records on race and criminal justice, with Biden following up his characterization at the first debate of Trump as a racist.

“He pours fuel on every single racist fire. Every single one. Started off his campaign, he’s coming down the escalator saying he’s gonna get rid of those Mexican rapists. He’s banned Muslims because they’re Muslims. He’s moved around and made everything worse across the board,” he said.

In response to a question, Trump defended his characterization of the Black Lives Matter movement as a symbol of hate, saying his first encounter with them was seeing anti-police protesters chant “pigs in a blanket” and “fry them like bacon.”

The audience at Belmont University in Nashville, Tennessee was under strict instructions to remain silent and not to cheer or boo candidates, as moderator Kristin Welker of NBC News informed viewers.