In Wake of Protests, Bangladesh Approves Death Penalty for Rape

Protests calling for strict punishment broke out after video of a rape went viral, but activists oppose the new law. 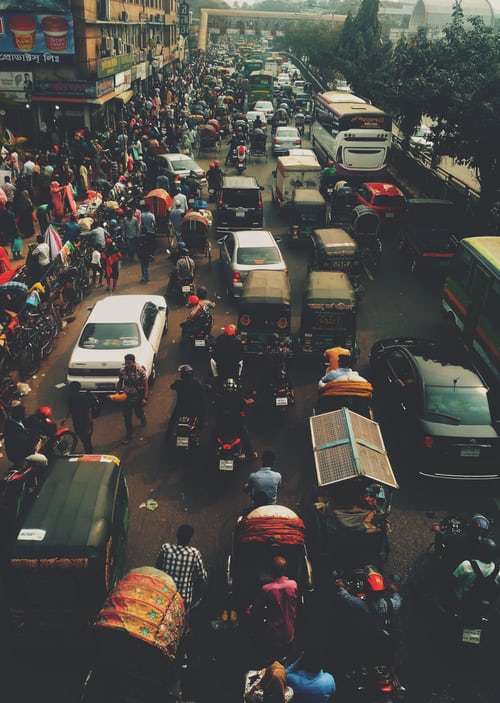 Dhaka, the capital of Bangladesh, was roiled by protests earlier this month after the video of a rape went viral on social media. (Courtesy: Niloy Biswas/Unsplash.)

Bangladesh approved the death penalty for rape on Oct 13, after days of protests on the streets and on social media against the high incidents of sexual violence against women in the country.

There has been a recent spike in sexual crimes in Bangladesh, with nearly 1,000 incidents reported from January to September this year. More than a fifth of these were gang rapes, according to Ain o Salish Kendra, a legal aid and human rights organization. Out of the 1,000 incidents, 43 women were killed and 12 committed suicide.

Last week, protests led by students in Dhaka and other cities erupted after video of a woman being assaulted and gang-raped in the southeastern Noakhali district went viral on social media. Eight people have been arrested in the case.

Within days after amending the law, which had stipulated a maximum life sentence for rape convictions, a Bangladeshi court ordered the death sentence for the first time in the case of five men convicted of gang raping a girl in 2012.

Other crimes in Bangladesh are already subject to the death penalty for those over age 16, but in the wake of the new amendment, activists are speaking out against capital punishment.

“It’s a bad decision, not only because capital punishment is inherently inhumane and should be abolished, but because it is not a real solution to sexual violence,” said Meenakshi Ganguly, South Asia director of Human Rights Watch. “There is no conclusive evidence that it curbs any crime, including rape, and it could end up deterring reporting or even encouraging rapists to murder their victims to reduce the likelihood of arrest.

“Bringing in the death penalty is easy,” she said. “What takes work — and is urgently needed — is to overhaul a justice system in which survivors are systematically ignored and maligned, and to ensure they have access to health services and legal support. Sexual assault crimes are underreported, but even when survivors take the brave step of reporting the crime, their cases are rarely properly investigated or prosecuted. In this country, the low conviction rate of rape gives rapists every reason to be confident that they will get away with their crimes.”

Farah Kabir, country director of global humanitarian organization Action Aid, said, “Bangladesh is no exception to gender violence. There has been a considerable rise in rapes and domestic violence in the country during the pandemic. Loss of livelihood and jobs have increased violence against women.

“We are working on reducing gender-based violence,” said Kabir. “The factors that can be attributed to violence against women are patriarchy, power and also the violence that is celebrated in literature or films, specially over girls and women. It is also because of the social and economic status of women in the country. Even though women are working in several sectors, there is still lack of recognition of women’s contribution which will enable them to be treated equally.”

The Bangladesh High Court earlier this year ordered the Law Ministry to form a commission within 30 days to address the increase in sexual violence. Nine months later, the commission has yet to be created. Women activists helped the government draft a sexual harassment law 15 years ago, but it has not been implemented.

Shireen Huq, a protester and founding member of Naripokkho, a women’s activist organization, said, “The provision of death penalty already existed in the Prevention of Repression of Women and Children Act 2000 for gang rape, and murder after rape. Why exactly the government chose to respond to the protests by hurriedly enacting an amendment in the law, by way of a presidential ordinance, raises questions about its real intent.”

“We have had the provision for capital punishment in our statutes for a number of criminal offenses, including, for example, for murder. Has the incidence of murder declined as a result? Rape is not a simple law-and-order problem. Rape and sexual violence are driven by misogyny, the seeds of which are sown across a much larger canvas”

“The actual work of dismantling the culture of rape and sexual violence has to be done simultaneously across different sectors — education, culture, politics, etc. — and through the adoption of long-term measures. Government interventions must contest socio-cultural norms that support inequality between women and men. Instead, the government chose to swiftly amend the law and increase the punishment for rape,” said Huq. “The government is nervous about any protest gaining strength in numbers, as it can quickly turn into a movement against the government.

“The government was not forced to introduce the death penalty, it was convenient for them to do so,” said Huq.

The Rape Law Reform Coalition, including 17 women’s rights groups, in 2018 issued a “10-point demand on justice for rape,” calling for legal and institutional reforms, including reform of rape laws in line with human rights standards and allowing proportionality of punishment and the introduction of sentencing guidelines.

Bangladesh has an extremely low rate of implementation of the death penalty. It carried out two executions in 2019, according to Amnesty International, and no one was executed in 2018.