The colorful outfits for festival dance performances, shut down due to the pandemic, are donated to hospital volunteers. 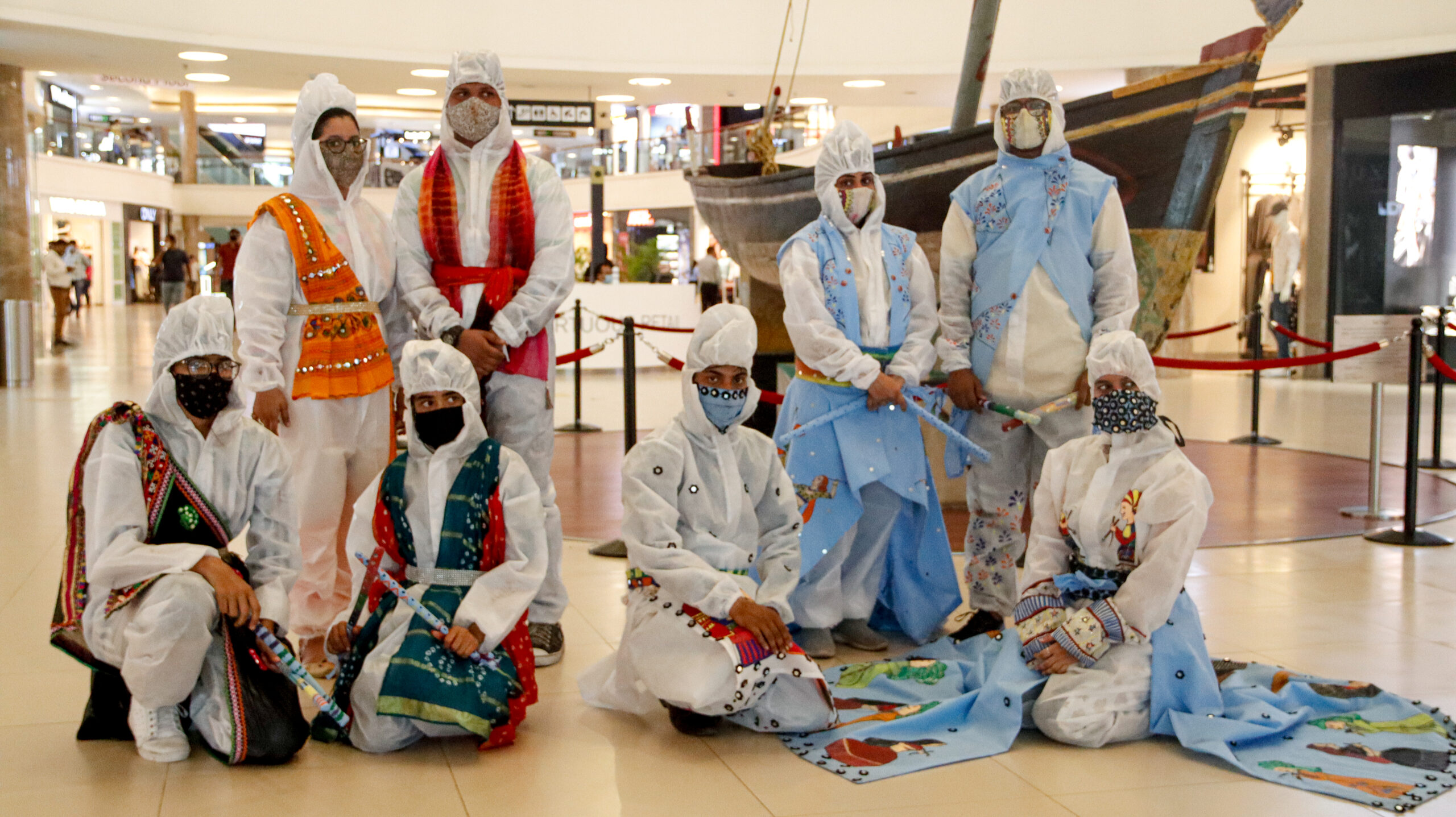 The colorful outfits for festival dance performances, shut down due to the pandemic, are donated to hospital volunteers. (Courtesy: Institute of Design and Technology, Surat.)

To keep up the spirit of this year’s Hindu festival of Navratri during the pandemic, a group of creative students in Surat have designed festive outfits from personal protective equipment (PPE) and donated the colorful attire to Covid care volunteers at a local hospital.

The 10-day festival of Navratri began on Oct. 17. Celebrants usually participate in garba, a dance that originated in the western state of Gujarat. It features dancers in traditional attire moving around a lamp to pay homage to goddess Shakti. This year, however, in an effort to prevent the spread of Covid-19, authorities have banned garba parties.

Undeterred, first-year students at the Institute of Design and Technology hand-painted PPE suits and embellished them with mirrors, designing a two-layer fully protective outfit replete with masks and sticks used in the dance. The costumes are made of polypropylene fabric approved by the South India Textile Research Association. The students donated the outfits to volunteers at the Civil Hospital in Surat.

“The PPE suit combo comprises three garments (the jumpsuit for protection and the other two for styling purposes), a mask and dandiya stick covers,” said Kamya Kinariwala, a first-year fashion design student.

In light of the pandemic, the Ahmedabad Chapter of the Indian Medical Association appealed to Gujarat Chief Minister Vijay Rupani to curtail activities: “We doctors have been working day and night without rest to fight this pandemic and to treat the patients as front line warriors. It would be catastrophic if such social gatherings are allowed.

“Though rules and regulations are put up, people hardly follow them. There will be no social distancing and may be no proper mask adornment. This would in turn increase the rate of infection, and we would be putting so many lives in danger.”

Cultural and religious events will be allowed outside containment zones under specific conditions, including providing markers signifying 6-foot distance, mandatory use of masks, thermal scanners and sanitizer.

“Since the government has banned garba this year, our institute’s students were disappointed,” said center director Ankita Goyal. “During the class, they came up with the solution to celebrate safe garba. The Navratri PPE suits are painted with love because we wanted to make them look colorful, light and cost-effective.”

Although Navratri is celebrated throughout the country, Gujarat stands out for the sheer scale and opulence of the events. Usually, these events are organized by local resident associations. However, they require permission to blast music on loudspeakers beyond deadlines.

Large-scale commercial events, which are also popular, usually rely on the permission of local police, district authorities, fire departments, and food and drugs control department. The business lost this year runs to millions of rupees, analysts say. This includes obvious loss of revenue to venues and commercial spaces.

Devotees will be permitted to set up spaces for worship with prior permission from local authorities. However, touching idols or the deities, and distribution of prasad (blessed food) is not allowed.

Meanwhile, others are also coming up with innovative ways to celebrate the festival. A ‘Virtual Gharma Garba Contest’ by the Lions Club in Ahmedabad asks participants to upload a 2-4-minute video of their performance in traditional outfits.

Aarushi Upreti,  a fashion design faculty member at the institute, dispelled any idea that the PPE designs were somehow an act of protest against the ban on gatherings.

“It was an act towards social responsibility to show we all are in this together and this time shall pass soon,” she said.

The institute, based in Surat, Gujarat, has over 10 other branches across India. Surat is home to the state’s first design studio, Fashionova Designs, which has received startup recognition from the government.

The design development center has been started with state-of-the-art machinery and other facilities to further fashion design as a viable professional choice. The city is also considered to be the country’s textile hub, brimming with handicrafts and indigenous craftspeople.

The state is also a large exporter of traditional apparel.