Carnatic Music of Southern India Has Been Slow to Evolve

Musicians feel that experiments and innovation only work only when one is a master of the craft. 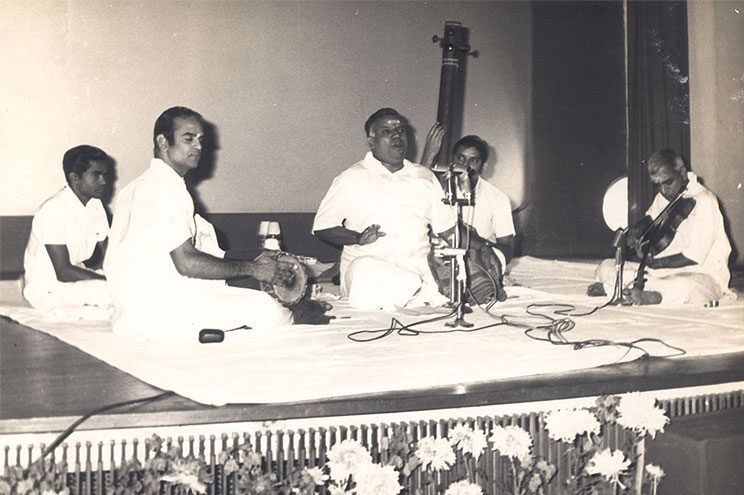 Maharajapuram Santhanam at a concert in Delhi (Courtesy: Personal photo archives of Maharajapurams)

In 1978, when Indian Carnatic musician M Balamuralikrishna was made the president of the 52nd Annual Conference of the Madras Music Academy, it was stated that one of his contributions to the genre was creating new ragam (a set of notes woven together). Chennai — the cultural capital of India — was shocked. It created a furor as many felt that there was no scope for inventing any new scales in the south Indian music genre — Carnatic music.

The same academy that made him the president of the 52nd annual conference, said in its mid-year expert committee meeting, that what Balamuralikrishna had done was to popularize existing ragam and not create them.

Balamuralirishna was criticized despite the fact that this was not the first time that ragams were invented in the genre.

This trend of opposing anything new continues to plague Carnatic music. In a recent incident, when Carnatic musicians T M Krishna, Nithyashree Mahadevan, and OS Arun, among others, sang Christian hymns, they were threatened by a Hindu fringe group called the Rashtriya Sanatan Seva Sangh(RSSS). This group accused these artists of promoting conversion.

Ragam, tanam and pallavi are the components that allow a musician to improvise. Ragam is the scale, tanam is to expand the tune and pallavi is the refrain as used in western classical music.

Classical music in India is as old as civilization in India. Under this broad umbrella, two different branches developed — Carnatic and Hindustani. While Carnatic became the style followed in southern India, Hindustani flourished in the north. Due to Persian and Sufi influences, Hindustani music is considered religiously neutral, while Carnatic music is largely practiced by Hindus, with only a few artistes from other communities. Perhaps, the only external influence Carnatic music was exposed to was the East India Company.

Interestingly, medieval poet Muthuswami Dikshitar created some compositions called Nottuswaras — “note” in the English sense and “swara” from the Indian term for a musical note — in the western classical style of music. These Nottuswaras were a result of his interaction with the East India Company that ruled the subcontinent during Dikshitar’s time.

Gowri Ramnarayan, a musician and journalist recalls how many Carnatic music composers and musicians got together during the nationalist movement.

“During the nationalist movement, many musicians sang nationalist songs about the equality of human beings. Papanasam Sivan composed a song with a socialist message called Pazham Bharata Nannadu.

A path-breaking moment for Carnatic music was when MS Subbalakshmi, Asia’s first musician Ramon Magsaysay awardee, performed at the United Nations. The highlight of the show was her piece on world peace — Maithreem Bhajata.

Another battle musicians had to fight was to introduce the Tamil language in Carnatic music in the 1940s. Until then, Telugu and Sanskrit were the languages meant for Carnatic music.

MS Subbalakshmi was part of this Tamil Isai Movement and was criticized by the Music Academy and other traditional institutions. These institutions accepted Tamil as a language suitable for Carnatic music only after a lot of opposition.

Ramnarayan recollects how Balamuralikrishna presented Tamil songs at a concert in Andhra Pradesh, a state in south India where Telugu is the language of the majority.

“Balamuralikrishna was firm that his audience would have to accept a concert with Tamil songs as well”, says Ramnarayan.

In present times, the hardline faction of Carnatic music continues to exist, however, there are some musicians like Maharajapuram Ganesh Vishwanathan who believe that there is always scope for innovation. A fourth generation musician from his family, Ganesh has experimented with Blues music to record a Carnatic song.

“There are two are schools of thought when it comes to innovation — one that feels that these experiments should be done within the framework of Carnatic music and another that thinks it’s okay to explore outside its grammar,” says Ganesh.  “I am using western tunes to sing some purely Carnatic compositions.”

Ganesh, however, believes that one needs to master Carnatic music before experimenting with it.

“Maharajpuram Vishwanatha Iyer, my great grandfather was a maverick. He flouted all norms. Despite that, he was praised by everyone because he was already established,” said Ganesh.  “You cannot ignore the basic grammar of Carnatic music — all my innovations are within its framework.”