Even though jackfruit is the national fruit of Sri Lanka, exports are still not earning the country enough revenue. 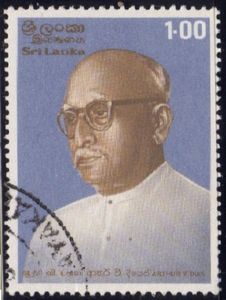 A postage stamp released by the Sri Lankan postal department in 1986 to commemorate Arthur V Dias on his 26th death anniversary. (Courtesy of Colnect.com)

Jackfruit — often used as a meat substitute in some South Asian cuisines —  is the national fruit of Sri Lanka. It was introduced in 1918 by Arthur V Dias, a rich planter, to ensure that Sri Lanka was self-sufficient in food through the World Wars, a time when supply chains were cut off.

Today, jackfruit is ubiquitous in Sri Lankan cuisine. The raw fruit is used to make curries, the seeds are fried as a savory snack and the ripe version is enjoyed for its sweet, succulent taste.

“The jackfruit can be cooked in a variety of ways,” said Anne, a Sri Lanka-based home cook, who goes by her first name. “ ‘Polos,’ as the baby jackfruit is called, is cooked in a semi-dry gravy and eaten with rice. The ripe jackfruit is sometimes cooked with dried anchovies to make a sweet and tangy dish. A person with a sweet tooth would relish the ripe fruit by just adding a few spoons of honey to it.”

Dias came from one of the richest families in Sri Lanka who were in the Arrack (local liquor) business, but ironically, he was a champion of the Temperance Movement that fought against the sale of liquor. A close friend of the first Prime Minister of Sri Lanka, D.S. Senanayake, Dias supported the government’s Grow More Food campaign. Dias is referred to as “Kos mama” colloquially. In Sinhala, “kos” means jackfruit, while “mama” means uncle.

“Arthur used to travel all over the island to distribute jackfruit seeds and saplings,” said Dr. Eranda Pathirana, a nutritionist and the great-grandson of Dias. “He took every opportunity to talk about the goodness of jackfruit whenever he was invited to something as simple as a sports meet. That is how he earned the nickname “Kos mama.”

“Arthur used his own money to popularize the jackfruit and Sir John Kotelawala (the third Prime Minister of Sri Lanka from 1953 to 1956) had announced free postal services to send jackfruit seeds across to any part of Sri Lanka, as a way of encouraging the movement,” said Pathirana.

Dias’ vision was to make Sri Lanka self-sufficient in food with all classes being able to afford it.

And the jackfruit was the answer to his quest for affordability and self-sufficiency. His target was hindered during the first World War since the species of jackfruit he had planted took about six years to bear fruit. However, by the time the second World War took place, Sri Lanka didn’t have to struggle with feeding its people.

“Arthur imported a species of jackfruit from Malaysia, which could produce fruit in 18 months’ time,” said Pathirana. “The Jackfruit Propagation Campaign that promoted the jackfruit tree as the ‘bat gasa’ or ‘the tree of rice,’ was kickstarted in 1918 with an aim to plant a million trees on the island-nation.”

The core principle of the Temperance Movement discouraged the consumption of liquor, cigarettes, and beef. Pathirana believes that since Dias was against the consumption of meat, he may have promoted jackfruit as a meat substitute.

Jackfruit seeds contain soluble and insoluble fiber. According to the Food and Drug Administration (FDA), soluble fiber can help lower LDL cholesterol levels and slow the absorption of carbohydrates into the bloodstream, which can help prevent spikes in blood glucose after eating.

Dias believed that the jackfruit, or Jak as it is also called, had enough nutrients essential for the human body. It is this belief that gave birth to his campaign’s catchphrase— “Jak is good for food and wood.”

In Sri Lanka, the baby jackfruit is traditionally given to young mothers to increase lactation, while powdered jackfruit is used to treat diabetes mellitus.

Currently, Sri Lanka exports jackfruit in small quantities to west Asian countries and the Maldives in the form of dehydrated jak or frozen jak. Although the potential for jak exports is highly profitable, there are problems that exist in connecting the market with the producers.

“There is a huge export market available for jackfruit and most of the jak produced in Sri Lanka is underutilized as the local demand for it is slightly low. As a result, a lot of jackfruits are wasted.”

Lalith Manjula, a founder of ‘Kos Mama’ —  an enterprise inspired by Dias, makes edible products made from jackfruit. In the past, Lalith’s attempt to export processed jackfruit failed but he seems to have found a solution for it now. “Filling the packaging with nitrogen gas fixes the problem,” said Manjula.

Neomal Dias, another great-grandson of Arthur V Dias, supports the Jak Development Foundation(JDF), which was started by W.B.A. Jayasekara to continue Dias’ vision.

T.L Wijetunga, the Executive Director of the  Sri Lanka Centre for Development Facilitation(SLCDF, the body that JDF is a part of, said the JDF aimed to plant jackfruit saplings, identify the appropriate technology to preserve jak, and help the local producers connect with the international market.

“One of my friends in Germany requested me to introduce him to some locals who are engaged in jackfruit cultivation,” said Wijetunga. “Germany has a very good demand for jackfruit and several German players in the business have shown their interest in buying the fruit from Sri Lanka. Neomal and I are working on it. Introducing the locals to the international market could help them out of poverty, which is the primary objective of the SLCDF and the JDF.”

“Both the locals and the government are to be blamed for the poor exports,” said Wijetunga. “The locals do not show any interest in starting a venture as their primary objective is to get the return on investment as soon as possible.”

“Jackfruit is a chemical-free food and that is why it has managed to secure a place in the global market. As a former government official, I know how the government functions and it is to be blamed for not identifying the potential of the jackfruit export market,” said Wijetunga.