The fate of 2 million people hangs in the balance as the ruling party demands re-verification.
By Sadiq Naqvi October 16, 2020
Facebook
Twitter
Linkedin
Email 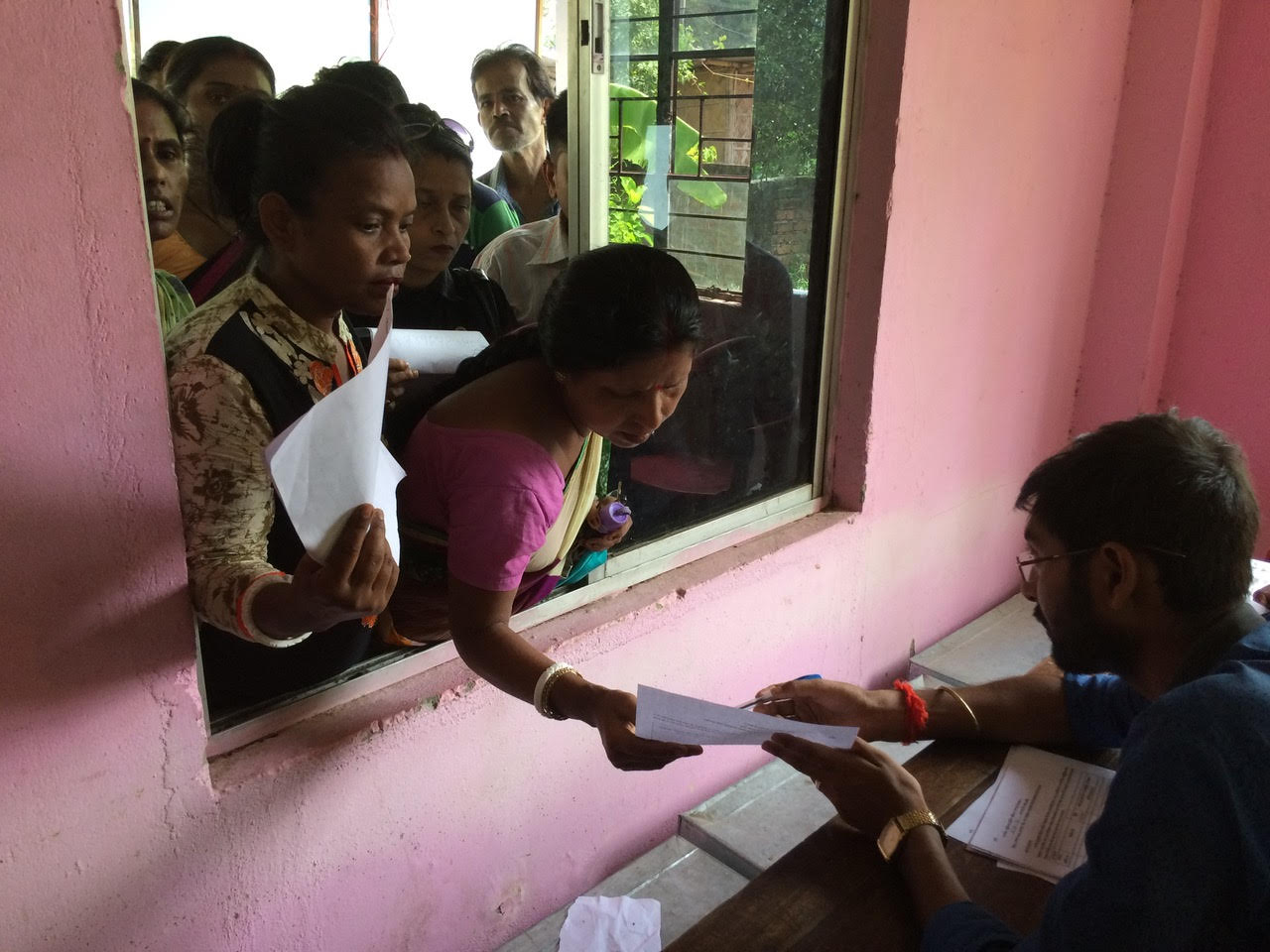 A woman shows documents to an official at a NRC help center in Guwahati, Assam, on August 10, 2018. (Courtesy: Sadiq Naqvi.)

Authorities in the northeast Indian state of Assam have ordered the removal of names of ineligible persons from the citizenship registry, even as the fate of over 1.9 million people who were excluded from the registry in August 2019 remains in limbo.

Those in limbo are waiting for rejections orders that would form the basis of their appeals for inclusion in the list of citizens. The government has said it is not possible to issue the rejection orders since the Registrar General of India has not yet officially accepted the list, and various petitions demanding verification of the list are pending in the Supreme Court.

A group of activists in Assam blames the delay on the Bharatiya Janata Party, which is in power both in Assam and New Delhi. The BJP has been spearheading the demand for re-verification, claiming errors in the citizenship list.

Hitesh Dev Sarma, state coordinator of the National Register of Citizens (NRC), wrote on Oct. 13 to all district deputy commissioners in Assam about how some ineligible names have made it on to the citizenship registry.

“You are, therefore, requested to submit the list of such persons who are not eligible for having their names in the NRC along with speaking order justifying reasons for each case for necessary action for deletion of such names,” Sarma wrote in the letter reviewed by Zenger News.

Before the NRC process took off, the specialized border section of Assam’s police and local election commission officials were already carrying out investigations and marking people as doubtful voters or suspected illegal immigrants.

The DFs, DVs, those whose cases are pending with the FTs and their descendants were not to be included in the citizenship registry till they are declared citizens as per orders of the Supreme Court, which closely monitored the preparation of the updated NRC list.

This update to the NRC, meant to identify illegal immigrants, was started in 2015 when residents of Assam submitted detailed applications for inclusion in the citizens list. The original citizens list was created after the census of 1951.

By July 31 this year, the 100 foreigners tribunals had declared 136,149 as illegal foreigners, many in ex parte proceedings. Thousands of cases are pending. It is not clear how many of them made it to the final list, which was published on Aug. 31, 2019, and excluded over 1.9 million applicants.

“It depends on the local registrars. It would not be appropriate to speculate,” Sarma said.

Before this list, in July 2019, NRC authorities under then-state coordinator Prateek Hajela had produced an additional draft list of 102, 462 names wrongly included in the citizenship registry. This list included people from the ineligible category.

Sarma said authorities could bring out another list with names of fresh exclusions.

“There will be a list. Their names were included erroneously,” Sarma said.

While there have been allegations that many names have made it to the NRC by fraudulent means, the lack of a centralized database of DFs, DVs and PFTs is another reason for the entry of ineligible names in the registry. The centralized database is still under development.

“It is not operational. We are in the process of making that database complete,” said Raunak Ali Hazarika, deputy inspector general of police with Assam Police’s Border Organization.

The INR 99 crore (about $1 billion) project would not only enable biometric tracking of those declared foreigners, it would also automate the process of foreigners tribunals.

The Indian government has approved 200 new foreigners tribunals to deal with the rush of the NRC appeals. It has also hired lawyers and former judges to head these tribunals and has been paying them salaries for over a year. But these tribunals are yet to be functional as they await the rejection letters from the NRC. The rejection letters would have a detailed reason for exclusion from the registry, which would form the basis of an appeal to FTs.

“Rejection letters are kept on hold because of Covid-19,” Sarma said on Oct. 16.

But court filings show that Sarma’s office is questioning the veracity and the finality of the list published on Aug. 31, 2019.

S.C. Keyal, assistant solicitor general of India who represents the central government and the office of the state coordinator in Assam, told the court that rejection letters were not being issued because the NRC list published on Aug. 31 had not yet been officially accepted by the Registrar General of India, who is responsible for it as per NRC rules.

“The Draft NRC for the State of Assam is yet to be accepted by the Registrar General of India,” a Gauhati High Court order dated Sept. 30 says, attributing Keyal’s submission to the court.

“Since there are a number of applications pending before the Hon’ble Supreme Court seeking re-verification of the NRC records and for preparation of a fresh NRC, the authorities are not in a position to issue rejection slips as on date,” the order reads.

In his Oct. 13 letter, Sarma ordered exclusions based on an NRC rule which is only applicable before the publication of the final list, essentially questioning the finality of the list published on August 31.

NRC authorities said at the time that the Aug. 31 list was a final one and takes into account all processes.

“The letter issued by state coordinator is a legal order,” Keyal said.

“Supreme Court was monitoring the entire NRC. NRC coordinator has published the list. As per rule 7, it has to be notified by the RGI,” Keyal said. “How can rejection letter be issued when things are not complete and names of thousands of illegal migrants are there in the list?”

The state government, led by the BJP, is at the forefront of demands for re-verification of the registry. While its petition to the Supreme Court for a partial re-verification was dismissed last year, it has maintained the demand.

“We have appealed to the Supreme Court that people of Assam will never accept this NRC,” Chief Minister Sarbananda Sonowal said in a rally in Upper Assam’s Dibrugarh district earlier this month.

Sonowal said that the names of many illegal immigrants were included in the registry.

“NRC has been reduced to a political weapon by the BJP,” said Aman Wadud, a lawyer and activist based in Assam. “More than a year has passed, the final NRC is yet to be published by the RGI. Nobody knows why.”

The Supreme Court heard the NRC case in January, but no hearings have taken place since.

“This is a betrayal of the faith people imposed on the NRC monitored by the Supreme Court,” Wadud said.