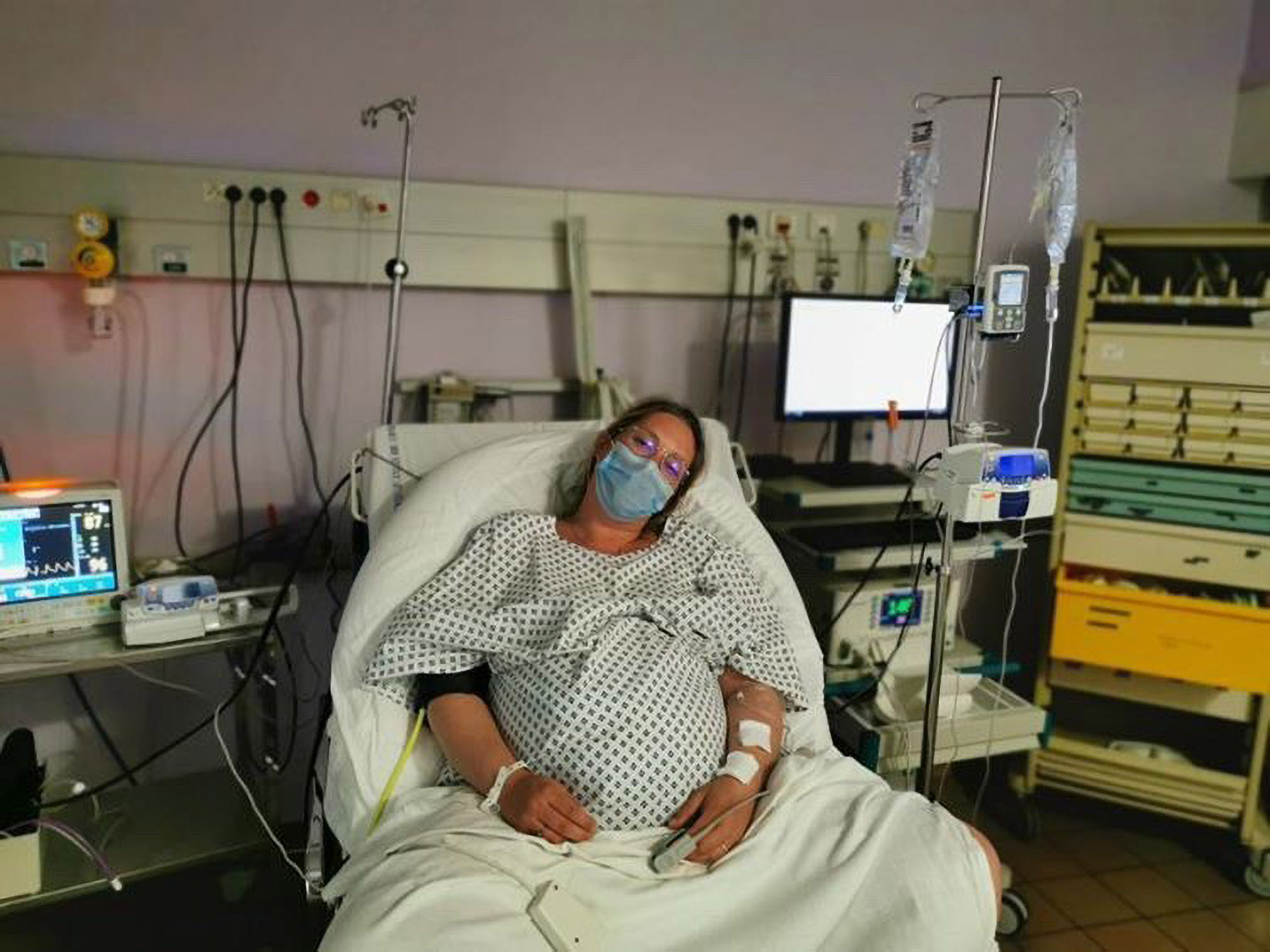 An anonymous pregnant mother wears a face mask while waiting to give birth in hospital in France. (Sonia Bisch/Real Press)

PARIS — Public health officials worldwide have encouraged people to wear masks to prevent the spread of Covid-19. But in France, a controversy is growing over whether that practice should apply to women giving birth in hospitals.

That battle has pitted women against doctors, and even doctors against each other.

The concern in France centers on women being forced to wear face masks during childbirth. In some instances, it’s led to emergency C-sections.

Hospitals have defended the practice as a necessary precaution to limit the spread of coronavirus, as there isn’t adequate time to get a test result for the virus when a woman goes into labor.

The National College of Gynecologists and Obstetricians (CNGOF) issued recommendations in favor of masks being worn. Dr Philippe Deruelle, secretary of the organization, immediately resigned in protest.

Critics, such as Dr. Laurent Raguenes, head of maternity and gynecology in Montpellier, Laurent Raguenes, and anti-mask campaigners have argued masked women are put in unnecessary distress, leading them to becoming too weak to push. They say birthing teams should wear FFP2 and higher-grade PPE masks instead.

Maud, a management controller, gave birth at Nanterre, a commune in the Hauts-de-Seine department, in the suburbs of Paris, at the end of April. She said it was made clear that if she did not wear a mask, the doctors could choose not to treat her.

“As soon as I pushed the first time, I realized it was going to be complicated. My instinct was to take off the mask to breathe,” said Maud, who did not provide a surname. She says she was told: “You have to keep your mask on, it’s protocol.”

“I was sweating profusely under my mask, I wasn’t managing it. In the end, the doctor had to use forceps, and my son was born with amniotic fluid in his lungs and a bump on his head from the forceps. He had to be transferred to the neonatal service in another hospital,” Maud said.

“No one told me beforehand that I would have to wear a mask. Before giving birth, we are taught to manage our breathing, and so to be in this situation was very traumatic,” she said.

“I went to a private clinic. As soon as I got there they told me I would have to wear a mask for the whole stay and this was non-negotiable,” says Fanny Ragot. She gave birth in April at the Clinique des Franciscaines, part of the Private Hospital De Versailles on the outskirts of Paris. Personnel wore surgical masks, not FFP2s.

“It was very hard to breath. I threw up a number of times. I couldn’t catch my breath with the mask on and in the end, it was decided that I had to have an emergency C-section,” Fanny said.

“I tried to take my mask off. They said I would be spreading coronavirus everywhere.” She added staff withheld food until she put a mask on.

Neither Maud nor Fanny have filed a formal complaint; both said it would be futile.

In April, the French health ministry said it would follow recommendations by the National College of French Gynecologists and Obstetricians. The ministry recognizes giving birth in “serene conditions benefits the well-being of the mother during the post-partum period.”

Since Sept. 8, her women’s group, Tou.te.s Contre les violences Obstetricales et Gynecologiques (All Against Obstetrical and Gynecological Violence), has collected testimony from more than 2,000 new and expecting mothers. (The collective was born of Bisch’s own trauma; she endured forceps without an anesthetic during childbirth.)

In addition, Bisch’s organization has created a hashtag called ‪#StopAccouchementMasque (#StopMaskedBirth) that has generated thousands of responses. It also posted a list of mask-enforcing hospitals to make it easier for expecting mothers to make an informed choice about where and under what circumstances they wish to give birth.

Bisch also provided a map of France showing the number of what she categorized as cases of obstetrical violence, meaning poor medical care or discriminatory practices, reported to them.

The President at the National College of Midwives of France, Adrien Gantois, argues the focus should be on protecting staff by giving them improved PPE masks. He has called for a localized review of the practice.

“Wearing a mask during delivery is not practical,” Gantois said. “The maternity hospitals that make it compulsory during this major physical exertion need to review their policy and prioritize the wearing of an FFP2 mask for the carers.”

Bisch said maternity wards claim they do not have enough high-grade PPE equipment, so the Ministry of Health should supply more. More than 753,000 babies were born in France in 2019, according to INSEE, the country’s national statistics organization.

France is the 10th-hardest-hit country by the coronavirus in the world, with 732,434 Covid-19 cases and 33,290 deaths, according to the latest statistics from Johns Hopkins University’s Coronavirus Resource Center. That situation has prompted the country’s government to limit social interactions and impose heavy fines on people who do not wear masks in public.