Bear-foraging in the Colorado town is on the rise, and residents are urged to be ‘Bear Aware.’ 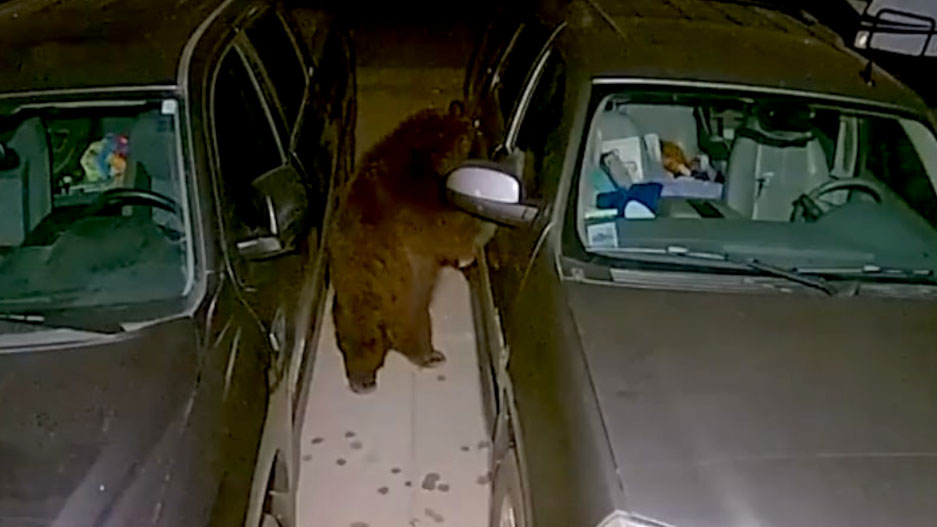 A bear looks inside a car in the Denver suburb of Littleton, Colorado Colorado Parks and Wildlife/Newsflash)

LITTLETON, Colo. — Residents of a Colorado town are being warned to be on alert after a bear was spotted roaming a local neighborhood.

The wild animal was caught on camera taking a stroll through the city of Littleton and stopping to stand on its hind legs to peek into a parked car in hopes of finding food. The footage was shared on Twitter by Colorado Parks and Wildlife (CPW), which manages the state’s parks system, on Oct. 12.

“Increasing bear activity is being reported in the City of Littleton. Residents need to be sure to only put their trash out on the morning of collection, take down all bird-feeders, feed pets inside and do not leave any scented items in your cars,” the agency’s Northwest Region said.

Bears in the area “share space with a rapidly growing human population,” according to CPW. (Littleton, near the Rocky Mountain foothills south of Denver, has a population of about 44,000.) The area’s most common species, black bears, are “curious, intelligent, and very resourceful,” and they “will explore all possible food sources.”

“If they find food near homes, campgrounds, vehicles, or communities, they’ll come back for more,” the agency said. “Bears will work hard to get the calories they need, and can easily damage property, vehicles, and homes.”

Bears that become aggressive in their pursuit of a meal “must often be destroyed,” CPW noted.

“Every time we’re forced to destroy a bear, it’s not just the bear that loses. We all lose a little piece of the wildness that makes Colorado so special,” it said. “So please, learn to protect bears by being ‘Bear Aware.’”

The organization reported receiving more than 5,000 calls related to bears from April through December of last year. Using a modernized tracking system, the agency documented 517 reports of bears breaking into homes and 303 reports of them breaking into vehicles during that period. The car break-ins were deemed to have been “preventable occurrences if people had only kept anything with a scent out of their cars.”

“Imagine the damage a bear would do inside your car, and the unwanted ‘present’ it could leave behind,” CPW said. “Keep car doors and windows closed and locked if you park outside. Make sure there’s nothing with an odor in your vehicle, including candy, gum, air fresheners, trash, sunscreen, lotions and lip balms.”

Despite weighing between 175-275 pounds, 90% of the bears’ diet consists of grasses, berries, fruits, nuts and plants. The rest consists mostly of insects and scavenged carcasses. Bears in Colorado tend to be most active from mid-March to early November, and can smell food up to five miles away.